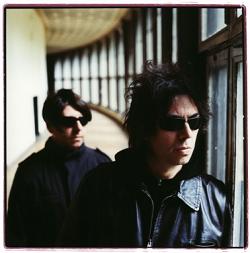 “This is how it works”, says Echo & The Bunnymen singer Ian McCulloch. “We perform two albums, go off for five minutes, and then come back on to do a few encores”. Simple as that, really – but a huge draw for fans of McCulloch and his merry men, a chance to see the band perform their first two albums on the 30th anniversary of their release.

To begin, a support slot / barely concealed homage from long term Bunnymen fan Kelley Stoltz. His brief set led us through songs from the appealing To Dreamers album, shot through with melodic charm and lyrical vignettes, while given a pleasingly rough edge with the rasp of the saxophone. Stoltz looked immediately at home on stage, proud to be supporting his heroes, though he stopped short of a cover from his own Bunnymen tribute album, Crock-O-Dials.

The real thing followed shortly afterwards, prefaced by The Doors‘ Break On Through. This was a tour de force performance of Crocodiles from start to finish, prompted as ever by the majestic guitar lines of Will Sergeant. With the smoke machine going into overdrive, a thick fog hung heavily over McCulloch, the lead singer barely visible at the best of times as he peered through his sunglasses at the audience. The band immediately settled, producing searing versions of Monkeys, Crocodiles and Rescue, the album gathering momentum as it progressed, a vociferous crowd immediately onside.

McCulloch continued to look the real deal onstage, effortlessly exuding rock star attitude without the histrionics, concentrating only on delivering those vocals, shot through with grit and determination as they told poignant tales of sorrow.

Heaven Up Here was next, some of its songs being aired in public for the first time in close on three decades. It was not quite as thrilling, settling for being merely excellent, in part due to McCulloch’s public questioning of his own material towards the end. Enthusiasm notably waned for Turquoise Days as the lyric sheet came out and the shoulders slumped rather.

Encores were despatched as mini-epics, none more so than a magnificent Lips Like Sugar, but there was unexpected humour when McCulloch introduced ‘the greatest song ever written’, and half the band went to play Nothing Lasts Forever. The singer, on the other hand, led them into The Killing Moon, majestic as ever, this swooning epic combining with an equally powerful performance ofThe Cutter to send the crowd singing long into the winter’s night.

Crocodiles – Going Up, Stars Are Stars, Pride, Monkeys, Crocodiles, Rescue, Villiers Terrace, Pictures On My Wall, All That Jazz, Happy Death Men, Do It Clean, Read It In Books, Simple Stuff

Heaven Up Here – Show of Strength, With A Hip, Over The Wall, It Was A Pleasure, A Promise, Heaven Up Here, The Disease, All My Colours, No Dark Things, Turquoise Days, All I Want

Encores – Lips Like Sugar, Bring On The Dancing Horses, The Killing Moon, The Cutter