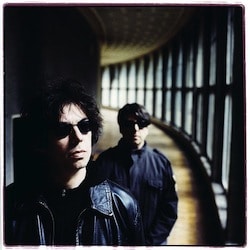 One of the intriguing advantages of the Empire’s pristine acoustics is that it makes weak bands sound average, and average bands sound quite good. Take tonight’s support bands. Johnny 4, who draw inspiration from the crummy ’80s flick Short Circuit, are your typical student band: young, fresh faced and looking decidedly nervy.

By this point the Empire audience isn’t even into three figures, and the band look like that decision to leave the pub circuit came a tad too soon. Mistakes are made, heads remain firmly fixed on instruments and size nines. It doesn’t help that their sound is a mushy yodel of distilled Pearl Jam and Radiohead.

To his credit singer Luke Albery tries to engage himself with a bit more verve in his string work and delivery, but this band and their sound just seem to have wrong written all over it, which tonight’s over forties aren’t buying either. Since most of them are old enough to be Johnny 4’s parents, they receive the Chichester quartet politely.

L20 (you may have guessed) are loud, Scouse and proud of it. Barely older than Johnny 4 they hop on stage with a spring in their step. Singer Danny Marshall’s ginormous lungs mean he can pretty much go toe to toe with The Music‘s Rob Harvey, only less shrieky.

Stylistically their sound is embedded with deep in folk and melody which tonight’s headliners in no small part helped shape, along with Messrs Lennon and McCartney. Marshall has a tendency to exaggerate his vowels and ape the monkey boy routine (wonder how long he spent in front the mirror smoking cigarettes and downing bottled water.) L20 materialise into a monotonous cobble of northern bands. Surely, please god, the magic Merseyside cow has been milked of its last droplet?

Or has it? Strictly speaking there is some magic in old daisy, as Echo & The Bunnymen recently proved on their welcome return to form with Siberia. Tonight they slide onstage to the slow burning Disease, its haunting two minute serenade sounding remarkably epic and updated some 25 years on.

If many were here tonight in the hope that Ian McCulloch and co would play much old material, they picked the right night – thanks to the filming of the DVD. The likes of Pride and With A Hip were casually slipped in with much aplomb. Noticeably, much of Siberia’s airing fell effortlessly into place alongside the new material, and that’s a testament to the band as a live force.

Ian McCulloch was on particularly fine form, goose stepping from almighty croons to waspy wails. Hidden under shades and a parka, chain smoking his way through the 90 minutes it took before he eventually broke a smile and spoke to the crowd, cracking a few jokes – which is where the subtitles button on your DVD remote will have to come into play. And with Lips Like Sugar, The Killing Moon and Nothing Lasts Forever making up no less than three encores, it topped off a rare night of brilliance from one of Liverpool’s true originals.