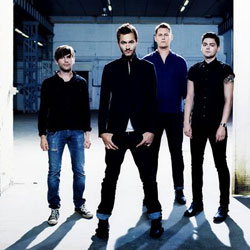 Now in its third year, Mencap’s Little Noise Sessions has really come into its own, with a line-up diverse enough for the casual music fan to find something to love.

If tomorrow’s show, with VV Brown, Alphabeat and Alexandra Burke is glossy pop night, and Friday’s show with Lostprophets and The Black Out is metal night, tonight’s opening gig in the series is the night of the disgruntled indie boy.

One indie boy who looks cheerier than usual is Bombay Bicycle Club’s Jack Steadman. Having played at the Union Chapel a few weeks ago, he looks quite at home; the awkward nervousness that sometimes detracts from his distinctive, maudlin voice vanishes.

Crowd pleasers Dust On The Ground and Always Like This serve them well, but it’s Steadman’s solo cover of Loudon Wainwright III‘s Motel Blues that makes their set. His velvety baritone suits its dirty, bluesy feel and, as he perches on a chair at the edge of the stage, his earnest, teenage face looks strangely out of sync with the noise that’s come out of it.

The Maccabees are introduced by Mencap ambassador Matt Horne who, by his own admission, is steaming drunk and encourages everyone to shout out their favourite swear word in honour of their surroundings. Orlando Weeks and co are more subdued during their disappointingly short set.

They open with Can You Give It, from their brilliant recent album Wall Of Arms. Its title track and Love You Better also get a look in, and serve as a sharp reminder of just how far they’ve come in so short a time. From a band who sounded like they might become a bit good to a band with the songs, music and a definite direction to back it up, they’ve matured massively since their 2007 debut Colour It In.

In keeping with the rest of the night’s acts their set is stripped back and Weeks seems to struggle to contain himself – he looks pained, forcing himself to hold off. But then comes Toothpaste Kisses – an example of how well these sorts of gigs can work. With the chapel in complete silence, the song was reborn – all memories of advertising deals forgiven and forgotten. Heartbreakingly beautiful, with an impressive light show flickering around the room, it was the biggest goosebump moment of the night.

Editors’ set was always going to be a strange one. “I’m going to have to censor some songs – we’re in a church,” jokes singer Tom Smith. “But then again, if you know our new album, you’ll know it doesn’t really matter.” From opening track In This Light On This Evening, the heavy religious undertones of their last record make for an eerie atmosphere.

The old classics get an airing, Munich and Bones among them. But it’s the new songs that light the fire in Smith’s belly. It’s these songs that see him clamp his eyes shut and rock into the mic and, in the echo of the church, his voice dips to reach levels only rivalled by Tindersticks‘ Stuart A Staples.

Recent gigs have seen them move towards a more synthesised sound, but with soft drums, electric bass and acoustic guitar, along with snippets of piano courtesy of Smith, the new tracks are given an Editors-of-yore makeover while retaining the anthemic quality that they’re so loved for.

At times the stripped back set takes its toll on Smith, who suffers two false starts and grimaces throughout the gig as he keeps forgetting his lyrics. “I’m kind of nervous tonight,” he admits before launching into a flawless No Sound But The Wind. Highlight of the night was An End Has A Start’s Smokers Outside The Hospital Door. The latest of many spot-on choices by the lighting engineers sees a cloud of green mist float down over the stage. The atmosphere is, ironically, electric – a mixture of incredible sadness and uplifting triumph. This was Editors at their best.