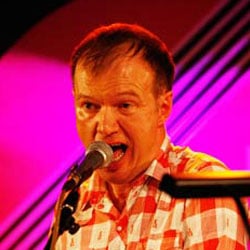 It’s the Last Night of the (Electric) Proms. Ex-Kink Ray Davies is up the road at the Roundhouse, but at the no less crowded but far more intimate Dingwalls, Edwyn Collins would give one of the season’s most anticipated performances.

Opening the night, recent graduate Sam Isaac took to the stage with a string quartet, trumpet and piano. “Thanks for paying your taxes,” he joked with his audience, clearly grateful for the development money Auntie Beeb had fetched out of her purse for his band.

A wet-behind-the-ears approach to lyrics and a flopsy ginger mop atop his head endeared him, and the string arrangements never felt bolted on or out of place. Whether his material holds its own without such embellishments remains to be seen, but his was a pleasing presence, even if he’s set to be the kind of artist only seal clubbers and kitten drowners could put down.

That Edwyn Collins is alive, let alone sat centre stage in Camden, is miraculous. The sometime Orange Juice front man suffered two cerebral haemorrhages in 2005. The frail figure sat reading his lines from crib sheets on a lectern testifies that his rehabilitation is not yet complete. His right hand is clenched throughout; his right arm plays no part.

As befits the indie hero he is, Bernard Butler introduces him. His countryman, Aztec Camera‘s Roddy Frame, plays acoustic guitar for him. A guest vocalist called Luca appears and unleashes backing falsetto. But Collins’ voice, always distinctive, is as authoratative tonight as it ever has been. Between songs he interacts with the audience, a deep cartoon laugh causing more than one audience member to well up. There’s no doubting who’s the star.

Material from the just-released new album Home Again, recorded before his hospitalisation, stands comparison with the best he’s written. The jazz tinged recent single You’ll Never Know (My Love) is one of many highlights, along with Orange Juice’s biggest hit Rip It Up. But the biggest singalong is reserved – of course – for his huge 1994 hit Girl Like You. He delivers it with gusto and follows it up with Blue Boy. He’s helped off the stage, so there’s no encore. But he’s played a full set with not a dud moment.

Edwyn Collins’ music has long been lauded by critics and his peers. Tonight’s performance underlined that the man himself is something of a marvel too. How fabulous it is to have him back.