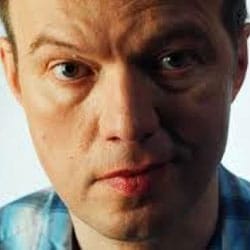 There are many examples of art and triumph over adversity, but the tale of Edwyn Collins is a truly remarkable story, telling of one man’s incredible strength in depth, an irrepressible creative force that absolutely refuses to die.

That much is made clear long before tonight’s performance, even as Sea Of Bees is casting her spell on the assembled throng in the Queen Elizabeth Hall foyer. Collins’ artwork is doing likewise in a subtle manner on the stall nearby, the collection of his bird drawings providing a visual document to his return from near-fatal illnesses.

The former Orange Juice front man continues to travel the long road to recovery both with the help of those around him, his wife and manager Grace Maxwell especially, and through a strength of character that renders many of the audience speechless. As his band open up with the riff to Chic‘s Good Times he appears, walking slowly but determinedly with the aid of a stick to take up his position centre stage.

Sharply suited, he takes in his surroundings, then has a quick drink of water while three photographers snap away near his feet. Unable to use his right hand, Collins expresses his emotions fully through his left, smiling openly at a number of guitar solos from his right hand man, Little Barrie‘s Barrie Cadogan, who keeps just the right side of indulgence as the bluesy twists and turns unfold.

Dialogue between songs is straight and to the point, and it proves refreshing not to have any rock star posturing, the songs speaking purely for themselves. And what songs they are, the new album working its magic early on before the formidable back catalogue is explored. As the singer half sits, half stands, the fires within burn brightly, passionate opener Losing Sleep gripping the audience immediately and not letting them go.

In the foursquare What Is My Role, surely a future single in the making, Collins is joined by The Cribs singer Ryan Jarman, the two trading off the questioning vocal. That his guest almost immediately joins the audience says much for the presence on stage. Rip It Up brings its own unique brand of tight-trousered funk to proceedings, the lyrics suddenly poignant as rhythmic similarities with the earlier Good Times are revealed.

Then it’s the turn of Franz Ferdinand‘s moustachioed Alex Kapranos to join the party, firstly for a thundering rendition of Do It Again and then a celebratory A Girl Like You, after which Collins leaves the stage. He is soon to return, and emotions run high in the acoustic pair of Searching For The Truth, with its priceless and poignant lyric “I will always be lucky in my life”, and Home Again, delivered with guitar alone and leaving hardly a dry eye in the house. His voice, better than ever, reveals unexpected tenderness when pared down to this level, yet remains fully capable of projecting above the full band.

It helps that the band are superb, Paul Cook running a tight rhythmic ship in conjunction with bassist Carwyn Ellis, and they extend the coda to Blue Boy for what seems like an age, getting the audience to their feet in the process. Yet good as they are this gig – and it seems almost churlish to call it that – is all about the front man, who responds with a wave as he finishes, gratefully acknowledging a third standing ovation.

The audience know full well what they are applauding – institutional songs, yes, but also the strength of inner resolve that somehow enables Collins to contemplate a gig in Hamburg the following night. Such is his drive that you cannot help but be moved – in the words of some of his contemporaries, a light that never goes out.

Edwyn Collins played: Losing Sleep, What Presence?, Make Me Feel Again, Dying Day, Consolation Prize, What Is My Role?, Wheels Of Love, It Dawns On Me, Rip It Up, You Can’t Hide Your Love Forever, Don’t Shilly Shally, Do It Again, A Girl Like You, Searching For The Truth, Home Again, Low Expectations and Blue Boy.