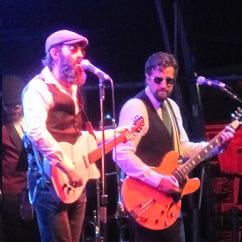 Is there a record for the number of songs played in a single set at Somerset House? If so, then it’s likely Mark ‘E’ Everett and his merry band smashed it to smithereens last night, as performing no fewer than 26 songs from a broad range across their career.

Everett, of course, is a famously prolific songwriter, and right from the start of this set it was apparent he and his band meant business. Following a languid but strangely appealing support set from Jesca Hoop, featuring an oddly moving story about how she enjoyed a smoke with her dying mother over the phone, the audience were in the right mood. The promised rain was nowhere to be seen, and with seagulls floating over the courtyard, the atmosphere was relatively balmy.

Eels began a near two-hour set with Flyswatter, to which was added the satisfying parp of baritone sax and trumpet, two of several sharp instruments applied by the Supernatural Brass. They were the early stars of the show, as Everett and new sidekick P-Boo, both sporting sharp waistcoats and sunglasses, busied themselves within hits and album tracks alike.

The most successful songs were those that held back a little. When rocking out, ‘E’ has a tendency to overdo the whoops, sometimes at the expense of his keenly emotional song content, but when a frisson of restraint was applied the messages were loud and clear. There was no Susan’s House, no Mr E’s Beautiful Blues, not even Your Lucky Day In Hell. But it didn’t matter. Such is the rich tapestry of songwriting making up Everett’s incredible life, he has literally hundreds of songs to draw on.

Instead he peppered the set with new material, of which I Like The Way This Is Going and Hot Fun In The Summertime were particularly effective. Final number Looking Up, from latest album Tomorrow Morning, showed tendencies towards gospel and funk seldom heard before. Perhaps the brass press those buttons in the live environment, but it was clear to all that the band were having fun on stage, contrasting directly with the darkness of preceding number Fresh Blood.

There was no banter as they rattled through the first 15 songs, other than a random whoop of “that was positive!”. But then Everett took a moment to introduce his band, bringing some lovely touches of humour as he did so. Novocaine For The Soul then emerged, the dark centrepiece of the set, and beautifully delivered. Perhaps the most poignant song, however, was Last Stop: This Town, the band taking a step back for the brass to bring in soft contemplation.

Full value for money was given, then – a pertinent observation for a band essentially gigging in the Inland Revenue’s courtyard. Mark Everett and his cohorts remain as sharp as ever, and in a live environment his life story really does gain an extra dimension.

Eels played: Flyswatter, That’s Not Really Funny, Somebody’s Watching You, Grace Kelly Blues, Packing Blankets, Prizefighter, My Beloved Monster, Fresh Feeling, That’s Not Her Way, Tremendous Dynamite, I Like The Way This Is Going, Love of the Loveless, Saturday Morning, This Is Where It Gets Good, That Look You Give That Guy, Hot Fun In The Summertime, Talkin’ Bout Knuckles, Novocaine For the Soul, Souljacker part 1, I Like Birds, Beginner’s Luck, Losing Streak. First encore: Last Stop: This Town, P.S. You Rock My World. Second Encore: Fresh Blood, Looking Up