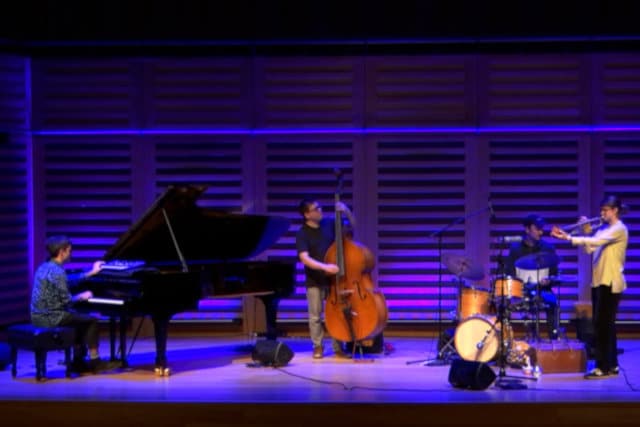 Sadly coinciding with the second national Covid-19 lockdown in England, a hasty but effective rethink of plans for the EFG London Jazz Festival saw this year’s edition become an all online affair. While far from ideal for a music that depends on the moment and the audience almost as much as it does on the skills and interaction of its practitioners, this move meant that the festival could continue its valuable role of brining a wide range of UK jazz to a broader audience even in the absence of many big concert hall performance opportunities.

Collaborating with a range of venues, including a successful run of shows with Kings Place, the festival captured live performances in empty spaces before streaming them to ticket holders or, in some cases, offering live streamed events for free on a Mixcloud channel. When these events move online, it is impossible to recreate the shared buzz of dashing from gig to gig, or indeed the social activity that accompanies the festival experience, but the programme still offered depth, variety and a range of approaches to the idiom.

Trumpeter Laura Jurd’s Dinosaur delivered a thoughtful and engaging set consisting entirely of material from their new album To The Earth, which had been released just as the country entered the first lockdown. If few ensembles in jazz achieve the kind of longevity that is common in rock and pop music, Dinosaur appear to have tackled some of the obstacles to this by reinventing themselves with each album. To The Earth occupies space quite some distance from previous album Wonder Wheel, which prominently featured electric keyboards and groove material, reasserting all the musicians’ background as acoustic jazz performers and improvisers.

It is possible, however, to find a common thread between their various studio explorations, this performance highlighting the sense of space and contemplation in their music. The individual pieces also have distinctive identities too. Slow Loris, building from an ascending bass figure, has a gently tumbling feel and a sense of slow building menace with hints of blues, before blossoming into a jousting free section. The closing ballad For One has a lyrical, elegiac feel and is beautifully understated and controlled. Banning Street Blues feels in touch with the history of the music and crackles with wit and energy. The band seems comfortable exploring this space, and they interact and improvise with empathy. 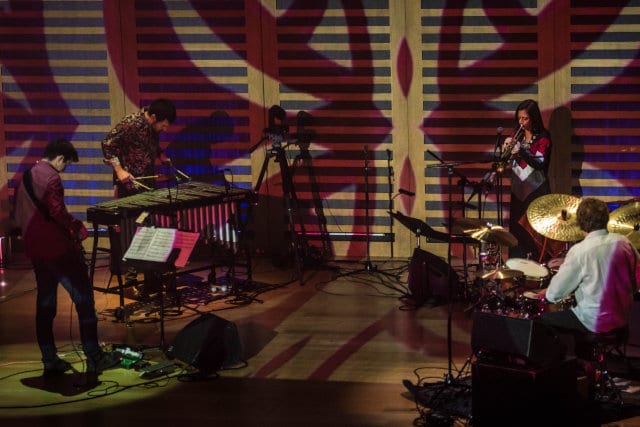 Yazz Ahmed’s fusions of jazz improvisation with other forms of music from around the globe, along with an openness to contemporary rock and pop have transported her to break out success and recognition, reaching an audience beyond the UK. Performing with her regular touring band with Ralph Wyld on vibraphone, Dave Manington on electric bass and Martin France on drums, this music has a personal and powerful sound, brilliantly anchored by Manington’s control of sound, feel and note duration on the bass, locked in with Martin France’s frantic but still nuanced drumming.

There is a real sense of command and expertise in this rhythm section. Ahmed’s melody lines are atmospheric and sometimes haunting, and the use of both vibraphone and electronics offers an interesting variety of approaches to texture. Ahmed’s music is also inspired by politics, culture and global events. Lahan Al-Mansour is partly inspired by the work of Saudi filmmaker Haifa Al-Mansour (Wajda, The Perfect Candidate), 2857 is dedicated to Rosa Parks and the closing A Shoal Of Souls is dedicated to all risking their lives crossing the Mediterranean ‘in search of a better life’. There’s a spirit of openness and adventure in the music that adroitly communicates these concerns.

Percussionist Sarathy Korwar’s set from Total Refreshment Centre appeared to have been filmed in the daytime, as beams of hazy light shine through windows. Korwar’s music is urgent, insistent and energising but perhaps suffers a little more than others in the live stream setting. It really feels that this is the kind of music that needs to be experienced in a room with others, its kinetic and physical qualities seemingly demanding movement. Still, there’s joy to be had in front of a computer screen too – not least in the dexterity and ingenuity of some of the lyrics (the opening Mango is superb), and also in the attention to sonic and textural detail too. His themes of migration and cultural identity also offered a neat complement to Yazz Ahmed’s set too.

So, while a necessarily more limited and compromised experience than a usual London Jazz Festival, this year’s programme still opened up bold, uncompromising and personal musical visions to a wide audience. Hopefully, we can return to enjoying this kind of musical risk taking and adventure in person next year, while continuing to make streams available as a bonus for extending this world’s reach that little longer.