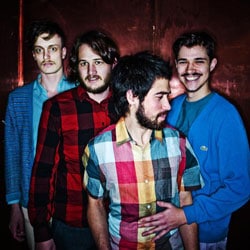 For the whole duration of Performing Parades, it felt like the Barbican had become a massive cave, through which we were being guided in a spectacular sonic display.

Efterklang’s music, already vividly uplifting in its electronic form, acquired an extra dimension thanks to the sensitive performing style of the Britten Sinfonia, not to mention Karl Bjerre Skibsted‘s restrained arrangements. Given the wild excesses of the 1970s when groups and orchestras met head on (step forward Procol Harum and Deep Purple, to name just two) this was an occasion to be treasured.

For the first half there was an extra treat in the shape of nine piece Norwegian band Jaga Jazzist, using their slot to promote next year’s One-Armed Bandit album. The group count The Mars Volta among their fans, and it was easy to see why when low-slung, funky bass lines were married with considerable virtuosity up top, while slow moving lines in the middle gave a perspective to the onrushing momentum.

This was all somehow harnessed by drummer Martin Horntveth, leading the group energetically through a series of mind-bending rhythms and riffs, without losing the listener. His sister Line Horntveth encapsulated the musical versatility of the band, switching between flute and tuba mid song, and it was these changes that leant the music its brilliantly coloured detail.

Theirs was quite an act to top, but Efterklang managed it in an absorbing performance. With three drummers hidden away behind sound barriers there was a massive and satisfying undercarriage to the drum sound, yet through the conducting of Paul Hoskins this failed to obscure some of the miniature orchestral detail. A solemn brass choir intoned, a rustic violin solo threw off a ragged, jaunty riff – and the ears and eyes were pulled this way and that across the stage as each piece of music took hold.

The music itself was subtly uplifting, with a ritual quality, vocals moving from slow intonations to rapid exultations of joy. In between the capacity crowd were almost silent – not through a sense of awkwardness but through a need to reflect on the impact of each song. Eventually the endearingly shy Casper Clausen got the audience to its feet for an epic closing song, bringing together the thrill of Arcade Fire and the grandeur of Sigur Rs but without sounding at all derivative, the music sparkling and twinkling under lights.

This was a special occasion indeed, one of those ‘I was there’ moments – and the power held by the music can be illustrated in the fact that lyrics became largely irrelevant, the impact felt in the huge reverberations of sound around the Barbican. This was a sound of which the home orchestra, the LSO, would have been proud.