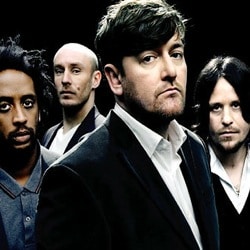 We live in an unfair world.

It’s a world whose leaders permit, and sometimes perpetuate, famine,war, suffering and the return of Steps. A world in which a defining moment in the career ofone of the greatest bands that Britain has produced in a generation can be overshadowed completelyby a bunch of sappy MOR balladeers playing a free gig a couple of miles south.

But Mancunians Elbow are that rarest of breeds – a British band that just keeps getting betterwith every passing year and album.

Lead singer Guy Garvey’s troupe just keep on delivering innovative, understated and jaw-droppingly beautiful records. So while all eyes in the industrywere on Coldplay‘s Brixton Academy show, Elbow, in the fine company of current buzz bandFleet Foxes, were staging their own masterpiece at the far more salubrious Royal Festival Hall.

Plaudits have showered down upon openers Fleet Foxes like the rain that is certain to drench theGlastonbury crowds next week. Everywhere you look, music journalists are dusting off their ‘Big Bookof Arcade Fire Cliches’ to herald the arrival of the new baroque pop messiahs.

Luckily, the band are the real deal, kicking off with a jaw-dropping acapella version of Sun ItRises, filling a venue that Brian Wilson has called his ‘spiritual home’ with a pitch-perfectBeach Boys homage. Much has been made of the band’s folky elements, but they prove they canrock out with the best of them – Your Protector is as good a backwoods stomp as you’ll find outsideof a Kings of Leon record, while set highlight White Winter Hymnal begins as a nurseryrhyme-simple chant before morphing into a soaring, Love-esque harmony that transports you tothe snowbound mountains and forests Pecknold eulogises.

After a set of such precocious excellence, old hands Elbow need to pull something special out ofthe bag to avoid being foreshadowed by their support act. And, incredibly, they do, to quitecomprehensively show the young pretenders who’s boss. Despite the scruffy, shambling exterior, Elbowhave always bought a certain amount of panache to their concerts and the group turn in a performancethat is simply stunning in its emotional intensity.

The band, with Garvey nattily attired in a black suit and bowler hat, dispense with the noiseearly. The victorious chant of Station Approach bounces around the Festival Hall like a terracechant, while the creepy Bones Of You sees him pugilistically rolling up his sleeves as if to take onthe world. This he does a few seconds later, dedicating the caustic Leaders of the Free World to’London’s special guest’ George Bush.

It’s easy to forget how good a band Elbow really are. It seems they’ve always been with us -despite having only released four records – ploughing a lone miserable furrow while contemporarieslike go supernova.

Halfway through, the band takes a step back to welcome onto the stage a thirty-strong male voicechoir, all dressed identically to the frontman. As the never-ending stream of mini-Garveys troop onstage, they chant the unmistakable introduction to early single Anyday Now over and over, and theband slide into the song.

It’s a piece of pure theatre, bettered almost immediately duringStarlings. After the lights drop, and the song’s electronica opening thrums around the auditorium,Garvey, bassist Pete Turner and guitarist Mark Potter are picked out in spotlights as they play asingle note trumpet fanfare directed to the venue’s royal box. In the box are anothergroup of trumpeters, playing the fanfare back to them. It’s one of those moments ofaudience interaction that Elbow seem remarkably good at.

If the rest of the concert failed to live up to this moment, it is understandable. However, thequality never drops – Grace Under Pressure’s ‘We still believe in love, So fuck you’ coda isbeautiful in its simplicity, New Born sees keyboardist Craig Potter climbing up into thenow-illuminated organ behind the stage like a long-haired phantom of the opera, drawing a standingovation from every member of the audience.

During set closer One Day Like This the choir march to the front of the stage and hundreds of thecrowd rush to meet them. As they finish, they place their hats on members of the audience’s heads,as if they are anointing their disciples, and Guy Garvey thanks the fans for ‘the gig of theirlives’. It’s hard to disagree with the sentiment.