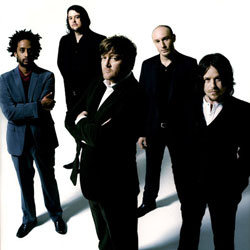 Sheffield University’s Fusion & Foundry venue has played host to many an up and coming band over the years, but it still seemed strange to see Elbow take the stage tonight. Surely a band of their reputation could fill the larger capacity Octagon over the road? And what were they doing on at the obscenely early time of 8pm?

The choice of the smaller of the University’s venues though meant that the stage was set for a suitably intimate evening with one of Manchester’s finest bands. Elbow have got better and better as they’ve grown older, culminating in the magnificent third album Leaders Of The Free World earlier this year. It’s a stunning, brooding classic of a record, and brought an appreciative crowd out in Sheffield tonight to welcome its creators.

As Guy Garvey hobbled on stage with the aid of a walking stick (the result of a fall earlier in the week apparently), a huge roar went up and the slow moody introduction to Station Approach was struck up. Garvey threw his heart into his love song to Manchester, conducting the audience along with him before a storming Fallen Angel saw him at the front of the stage, waving his walking stick like some kind of old-school preacher.

Garvey is an unlikely heart-throb. A big bear of a man, who resembles Ray Winstone with every passing year, he’s a bit overweight and proudly scruffy, yet still managed to attract cries of “get your kit off” from appreciative females in the audience. He doesn’t particularly do much on stage, but he’s got a real connection with his audience and his down to earth personality shines through at all times.

He’s also one of the best lyricists in the country. My Very Best is an absolute heartbreaker of a track, a lookback at a broken relationship with some killer lines (“would you tell her not to talk as if I died, though a tiny part just did”). The outstanding Great Expectations is another lyrical beauty, while Fallen Angel is almost poetry, describing a night on the town in Manchester, complete with a bouncer who’s got “that urban genie thing going on”.

As much of Elbow’s material is rather downbeat, you’d think that this may make for a dull night, but this is very far from the case. In fact, listening to Fugitive Motel or Switching Off is more intensely powerful than anything else. Yet Elbow are also a dab hand at the more upbeat numbers – Leaders Of The Free World rocks like you wouldn’t believe, and the last few minutes of the early classic Newborn are enough to make one’s head spin.

Even some technical gremlins couldn’t spoil the evening – when Garvey’s guitar was taken away for maintenance, he simply launched into a beautiful version of Asleep At The Back’s Scattered Black And Whites accompanied only by piano. It was a very special moment.

Throughout, Garvey also proved himself something of a stand up comedian when bantering with the audience – whether it be discussing who he thought was the best Spice Girl or discussing South Yorkshire’s traffic problems, he had a deadpan sense of humour very reminiscent of Sheffield’s own Richard Hawley.

A perfect encore of a minimal Puncture Repair and rousing Forget Myself rounded off the evening beautifully – no matter where Elbow play, they always manage to fill it with some truly life-affirming music.