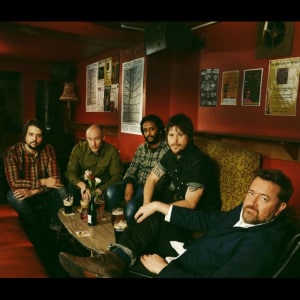 Elbow have mastered the market in delicately crafted, poignant songs about longing and love. They’ve ridden a rising tide of good feeling accompanying their journey since 2008’s The Seldom Seen Kid won the Mercury Prize and catapulted them to the mainstream, to the Radio 1 playlist and sold out nights at the O2 Arena.

It was hard to rue them a granule of that success, even more so when it became apparent that their homely northern warmth and nostalgic charm not only suited the huge arenas but expanded to fill them.

Nonetheless, it’s a treat to see them returning to smaller venues. Even with a black-clad string section, at the first of three sold out shows in the art deco splendour of the Hammersmith Apollo, this feels like an intimate gig.

They launch straight in with This Blue World, from most recent album The Take Off And Landing Of Everything, and only after that nod to the success of the last few years, a thank you to the acolytes picked up along the way, does Guy Garvey address the old hands and get to the crux of why we’re here: “We’ve got some old songs and some new songs for you tonight.” And with that they go back to the very beginning, with the first song from their first album, introducing Any Day Now as “an old one, about leaving our hotel room, which is something we never did”.

Bookending songs from their most recent and the most distant albums proves a complementary method. The low key, minor-inflected mumblings from 2001’s Asleep In The Back show the seeds of the emotive soundscapes of their most contemporary material, but with darker, more discontented musings, not to mention lyrics suggesting rich and complicated backstories packaged within a couple of simple lines.

This pattern continues through …Everything’s Fly Boy Blue / Lunette and then a “song about the dustbowl that we wrote in Texas, which I later learned is not in the dustbowl,”: Asleep…’s Fugitive Motel, a masterclass in yearning.

The songs are emotive and earnest, and yet the atmosphere of the gig never becomes cloying, in large part due to Garvey’s raconteuring between songs: “This song is about learning too late that you absolutely fucked it up.”

This intros The Bones Of You, and with it the middle of the gig and the middle stage of Elbow’s career, the time of rousing, barnstorming numbers such as Mexican Standoff and One Day Like This. After the obligatory audience sing song for the latter, Garvey invites us to “celebrate our wonderful moment of communion with a song about trawling nightclubs in a predatory fashion,” heralding in Bitten By The Tailfly, a stalking menace of a song which builds into a tremendous climactic rumpus.

Each incarnation of Elbow is greeted with rapture by the audience: the wise and constant companion offering solace on Hallelujah Morning; the defenceless, love-blinded partner on Switch It Off and Newborn; the childhood friend representing the reassurance of memory with Lippy Kids.

Only Garvey speaks, telling tales to the audience, occasionally strapping on an electric guitar for a few crunchy phrases, and sitting down on a stool to serenade us with an acoustic for Newborn.

A flash of light and they’ve disappeared, leaving the crowd to sing the ‘woah!’ refrain from Grounds For Divorce until they deign to come back five minutes later and play it for real. They finish with “an unsurprisingly sentimental and anthemic one,” My Sad Captains – yet it’s the refrain from an earlier song that sticks in the head long after: “Looking back is for the birds.” Perhaps, but how rewarding it is.