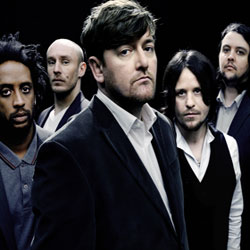 Elbow at KOKO? A match made in nursery-rhyme heaven if ever therewas one! And as Camden’s best rock venue slowly filled, the anticipation grew for this comeback gig to promote their new album. Actually, let me just read that last line again.

Well, wherever Elbow have been, they’ve certainly filled out. Now, I take the view that, in rock’n’roll, any criticism of the presentation is good coin, and when someone mentions how nice a woman looks in pop, that it is not meant to imply that she does not have other qualities. “You wouldn’t talk about her pretty blonde face if she was a man”. Too right, I wouldn’t.

And I might even hedge my bets about saying anything if she was fat. But Elbow, as a whole, are a portly group. Singer Gus Garvey admits this himself when he shuffles back on stage to the crowd’s rendition of the theme from The Littlest Hobo (a condition set by Garvey for the encore) and smirks at the sight of a thousand fans singing the tune to “five chubby lads from Manchester”. And has anyone spotted what Elbow spells backward?

But what, you rightly ask, of the music? Well, the vocals could have done with being turned up as the band drowned out Garvey’s gruff croon, particularly on the intense Switching Off, but all the crowd-pleasing moments from the first two albums were there, played with gusto. Pleasingly, the stand-out moments came from the new material, in particular Great Expectations – which was a bit too laid back and quiet for the assembled jabberers who were, sadly, not asleep at the back – and an absolutely storming Leaders Of The Free World. Early indications are that this new album will meet the expectations of the loyal cast of thousands assembled here tonight.

But let me return to the start and wonder again what benefit hibernating can have for a band, who only then wheel themselves backout when there’s PR to be done? Well, in Elbow’s case, it does seem that it is not only the waistlines that have grown. A passionate performance, a familiar ease with the audience and a set of new tunes that could rekindle the affections of the masses for their torch songs appear to be the result of withdrawing to the kitchen. And if music be the food of love, dining with Elbow is clearly a smart choice.