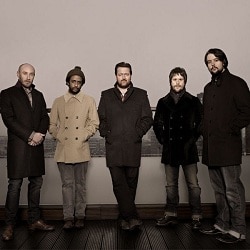 “If you’re thinking this a bit pantomime, that’s because it is,” says Guy Garvey as he strolls across his catwalk mid-song. Hang on a second. A catwalk at an Elbow gig? Anyone who’s seen the band rise to superstardom, albeit very gradually, might at first be rather shocked by something best reserved for the likes of Bono.

Of course it’s far from the only notable part of their show, part of a UK arena tour that winds up at the O2 with two sold-out nights in support of the recently released Build A Rocket Boys! It’s heavy on crowd participation with Garvey getting the audience to sing to particular parts of songs, introducing them like he’s in direct conversation and even handing out a cocktail to someone by the barrier. The rewards for the charming and unpatronising nature of his showmanship, aside from a pair of knickers being thrown at him during Weather To Fly (“The first time in 20 years!” he cries), are plentiful and the people in attendance are won over before a single note is played.

The music itself is drawn mostly from their newest critically-acclaimed release and The Seldom Seen Kid, the LP which catapulted them to the premier league. The main theme that runs all the way through this performance is how much more powerful these songs are in a concert setting, no matter what the dynamics are. The almost-hymnal Lippy Kids and The Night Will Always Win as well as the stripped-down Puncture Repair and Some Riot allow the emotion of their songwriting, which has always been upfront and honest, to really hit home. Barely a proverbial pin can be heard dropping.

They can also rock out extremely hard when required. Opener The Birds escalates and builds until strings announce their arrival with a euphoric flourish. Neat Little Rows and Grounds For Divorce are brash, loud and full-on. The ‘wall of sound’ trick is another spine-tingling element as shown in The Loneliness Of A Tower Crane Driver, one of their strongest album cuts.

The two most outstanding moments of the evening are Open Arms and One Day Like This. The former is joyous and uplifting in a way that not many other arena/stadium rockers can achieve. The latter predictably closes the main set and, no matter how many times TV have tried to kill it with near-constant use, it’s one of the strongest crowd-pleasers that can be unleashed. Everyone is singing at the top of their lungs and the sheer power of it is almost overwhelming.

Fans who’ve followed the rise of Elbow should cast aside their worries about them playing to larger audiences. For a start, Garvey is an expert at being Master of Ceremonies and gets everyone on board. Their musicianship is also far stronger than before and the setlist is the right-side of crowd pleasing. Tonight Elbow set out a very strong case for being considered one of the best live bands around.

Elbow played: The Birds, The Bones Of You, Lippy Kids, Mirrorball With Love, Neat Little Rows, The Night Will Always Win, Great Expectations, Grounds For Divorce, The Loneliness Of A Tower Crane Driver, Puncture Repair, Some Riot, Weather To Fly, Open Arms. Encore: Starlings, Station Approach, One Day Like This.