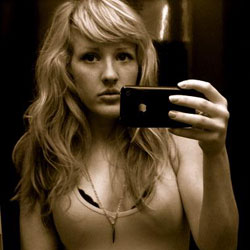 Ellie Goulding is on her marks and getting set to be one of 2010’s best known new stars.

We know this because:
a) She shares management with Frankmusik and her producer Starsmith, and a launch label with Marina & The Diamonds.
b) The major label marketing machine behind Lady Gaga is behind her, too.
c) She’s supported BBC Sound Of 2009 winner Little Boots on tour and heads out with Passion Pit in spring.
d) She’s already been on Later… With Jools Holland.

All she need do to justify the hype now is… well, sing a bit.

But this roll-call of credits, associations and ambitious friends in the right places aside, tonight was Goulding’s first full London headline gig; her first chance to deal with the rapidly burgeoning hype surrounding her. So. Is she any good?

Sporting an acoustic guitar from the off, she appeared as a folky oasis in the midst of a pop machine, both visually and sonically. It’s almost as though that machine, which points towards electropop ubiquity and supermarket shelves and seems to have assembled her band for her, is yet to trouble her away from her acoustic, waify tendencies. Her band are in Ibiza; she’s at the Cambridge Folk Festival.

Such a juxtaposition shouldn’t work. Encroaching on bearded Americana territory with her cover versions suggests she has a genuine feel for music by the likes of Fleet Foxes and Midlake; the latter’s classic Roscoe gets the Ibiza-lite cover treatment tonight to memorable effect, making a radio-friendly drivetime arrangement fly where Beyond The Wizard’s Sleeve once created blissed-out fantasia with the same source material.

Her own co-compositions are, in a live setting, a curious mix of fast-paced production of the frantic Frankmusik variety, straightforward drivetime melodies and her arresting voice. Where Marina and Florence belt out lines and knock horses dead at 100 paces, Ellie’s high-end warble, pitched somewhere around Joanna Newsom, is her most arresting trademark. Debut single Under The Sheets is a case in point; at once fragile and trilling, she gives the electronic arrangements a human base – and one that’s not a little nervous.

Her material’s not yet familiar to everyone in the room, but well before the end of her half hour it’s brought about cheers of “Ellie!”. “I welcome the shouting,” she says shyly. “It makes up for the fact I don’t say very much!” She does tell us that tonight is Starsmith’s last date with the band; he’s busy working on his own debut album. As such, when a drum is brought on for her to thump during inevitable follow-up single Starry Eyed by way of encore, it feels like an arrival of sorts, an artist now fully moulded and ready to strike out on her own journey. Perhaps she’ll say a little more, given time.