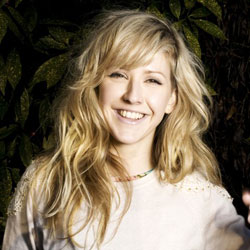 Despite charging her way into our consciousness at the start of the year, Ellie Goulding mania never really kicked off in the way it was predicted to. Her debut album Lights when straight in at Number 1, but the story of 2010 so far belongs to the more brash, obvious pop girls who made their breaks the year before, like Pixie Lott and Florence And The Machine.

Goulding’s had a few killer singles, but there’s nothing left on the album to sustain her for much longer. Many will be watching her next move very carefully because, from the very start of her career, she’s seemed a bit confused, and tonight’s show – her biggest to date – reinforced that.

With so much praise lavished on her from the outset (she won the BBC Sound Of 2010 award, and the Critics BRIT award) the chances of her living up to our massed expectations were practically non-existent but even still, Lights came as something of a disappointment. Her much hyped concoction of folk and electro failed to hit the spot, and the record was essentially a few singles padded out with songs which, to her credit, quite cleverly made the singles sound even better.

Tonight she’s dressed in denim hotpants and a beige crop-top, and she looks as fragile as her voice. It’s high-pitched but fluttering, it wraps you up but never too tightly. It’s got a whispering, folky edge that recalls the likes of Joanna Newsom, and it is her obvious fondness for that brand of kooky folk that sets her apart. She seems keen to highlight the idea that she is not just another electro-pop singer, and strums an acoustic guitar throughout most of the set, despite it being largely inaudible and completely unnecessary. She even covers Midlake‘s Roscoe, as if to prove to any dads or boyfriends patiently propping up the bar that she is the real deal, despite the sequins and flashing lights.

She’s flanked by her band of indie boys, who serve as another reminder of how differing her voice and their backing is. Fortunately, the combination works. Furthermore, the whimsical, weedy edge of Lights is chipped away live. The moody sixth form poutings that grate on record pack a stronger punch and even the likes of The Writer and Wish I’d Stayed make an impact.

Early in the set, a stripped down version of This Love (Will Be Your Downfall) works well, its simplicity giving her a chance to show off her voice. But the crowd are chomping at the bit – desperate for Starry Eyed. For now they are appeased with new single Guns And Horses, which sees her taking to the drums.

The rest of the big songs are reeled out late in her 13 song, hour-long set – Under The Sheets comes just before the encore, and she saves the best for last. It is what they have all come for, and she knows it. She launches into Starry Eyed by banging a drum that explodes with glitter as streamers fall from the ceiling. Gone is the mild mannered, well-spoken girl who mumbled her thank yous between tracks – she dances with her fists clenched, enjoying her moment as much as the audience.

She might have had fun with that, but it was Roscoe and This Love that seemed to really ignite her, if not her fans. With album number two surely underway, it will be interesting to see which way she goes – to please her fans and record label or herself, by further probing her folk roots.