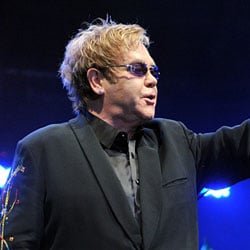 In a career spanning very nearly half a century, during which he has sold a quarter of a billion records, been knighted and enjoyed the astronomical fruits of his labours, Elton John has reason enough to suppose he has little left in music to prove. Opening the brand-altered 2010 BBC Radio 2 Electric Proms with a 33-song set that would last for some two and a half hours, it was as if the 63-year-old had decided to indulge his whims with Auntie Beeb’s largesse, rising to an occasion that allowed him to forestall becoming the tribute act to himself that might be expected of a household name at his stage of life.

But if the Electric Proms’ founding mantra of creating “new moments in music” could still be applied, even to this year’s line-up of senior citizens, Elton’s latest album The Union is one such moment; a collaboration with his “idol” Leon Russell, an American session musician turned singer-songwriter who’s played with everybody from Jerry Lee Lewis to Phil Spector. Tonight, with their grand pianos facing each other at the front of the stage, the two veterans would tinkle the ivories as they played The Union in its entirety as the centrepiece of a set that, like the album, was equal parts of both men.

Taken as a whole, the parts struggled to become a sum. A smattering of early hits from Elton, including 40-year-old opener Burn Down The Mission (Elton last played the Roundhouse 40 years ago, on that occasion supporting The Who) and the better known and Russell-influenced Tiny Dancer, formed an introductory mini-set that closed somewhat curiously with Plan B showing up in a suit and crooning a karaoke-standard edition of I Guess That’s Why They Call It The Blues. He came, he went, and the Earth remained unshattered.

A second mini-set followed, but this one began with a speedy entrance from Russell aboard an electric wheelchair. Stopping just shy of colliding with his piano, with the aid of a stick he shuffled over and made himself comfortable on his stool, his long white hair and long white beard revealing only enough of a face to be obscured by sizeable sunglasses. If Santa Claus lived in the Wild West, this is how he would look. His tremulous voice was initially at sea in competition with the 10-piece band as he reedily piped the words to Delta Lady, but soon the cobwebs parted and his eminently listenable tenor found its space.

This setlet also closed with a guest appearance, this time rising lounge-soul starlet Rumer, whose silky tones exemplified the character of Masquerade as Russell tinkled swooningly along. There would be two more short sets from the almost joint-headliners later, with Russell offered an Elton-less spot to wheel out some of his oldies while Elton offered a sop to hit-seekers with the ageless Your Song and the full-on romp of The Bitch Is Back.

But the centrepiece was to be The Union. Released just days before this gig, the new material seemed to be unfamiliar to most of the audience, even as the album highlights translated beautifully in a live setting. Russell’s collaboration with Bernie Taupin, I Should Have Sent Roses, was a wistful showstopper, the upbeat joint efforts If It Wasn’t For Bad and Monkey Suit caused some shimmies, and the boisterous Hey Ahab (repeated as an encore of sorts) and the poignant When Love Is Dying bore the hallmarks of Elton’s peerlessly classy, hook-laden songwriting.

Elton’s generous spirit in bringing his old friend into the public eye was touching, and rewarded by many of the show’s better moments involving Russell’s subtle piano flourishes – in contrast to Elton’s thundering, take-no-prisoners style. With so much material to their names they struggled to edit down a set that had no reason to last as long as it did, but for Russell the welcome exposure can only have done him good. And if such collaborations prevent Elton becoming his own personal tribute act for a while yet, the partnership has worked well for him, too.

Elton John played: Burn Down The Mission, Levon, Tiny Dancer, Ballad Of A Well Known Gun, I Guess That’s Why They Call It The Blues (with Plan B). Leon Russell played: Delta Lady, A Song For You, Masquerade (with Rumer). Elton John and Leon Russell played: If It Wasn’t For Bad, Eight Hundred Dollar Shoes, Hey Ahab, Gone To Shiloh, Jimmy Rogers Dream, There’s No Tomorrow, Monkey Suit, The Best Part Of The Day, Dream Come True, I Should Have Sent Roses, When Love Is Dying, Hearts Have Turned To Stone, Never Too Old To Hold Somebody, The Hands Of Angels. Leon Russell played: Tightrope, Prince of Peace/Out In The Woods, Roll In My Sweet Baby’s Arms, Strangers In A Strange Land. Elton John played: Your Song, Take Me To The Pilot, Sad Songs Say Too Much, The Bitch Is Back. Encore: Hey Ahab.