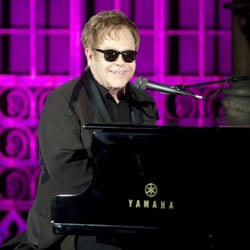 No tantrums, no tiaras. Tonight Watford’s finest left frills and vanity elsewhere, to play simply and alone with his Yamaha grand piano to an audience of just a few hundred.

A one-off gig, it was promoted by Absolute Radio, a fact you couldn’t avoid. We were treated to a promotional video celebrating their past year on two huge screens which stayed on stage behind Elton John all night, a stage also adorned with two large Absolute Radio flags. Plastering the Union Chapel with such monstrosities was a little like dressing the Mona Lisa with a rolling ticker tape and a few Zovirax ads.

But these things didn’t ultimately affect enjoyment of this phenomenal gig and they didn’t phase Elton, dressed in black and wearing sunglasses. He’d recently played at the Roundhouse as an Electric Proms headline act. That 33-song set lasted two and a half hours. Tonight was a lot more manageable. Again his latest album The Union, a collaboration with Leon Russell, the man he claims made him fall in love with the piano, was strongly represented. But tonight’s 90-minute set contained a more slimline 13 songs, five of which were new.

The remaining tracks were made up of “the classics”. Your Song was brought out early on, leading him to acknowledge and pay tribute to Ellie Goulding‘s current version. He complimented the way she changed how it was originally written, saying that was how covers should be done. We also got Tiny Dancer and Guess That’s Why They Call It The Blues, Don’t Let The Sun Go Down On Me, and Rocketman, which ended with an incredible piano wig-out.

It was a celebration of the way he used to make music. Every song played tonight was originally recorded live in the studio, a method he went back to for The Union.

It’s almost unnecessary to mention that his voice and his musicianship were immaculate. But they were. And it’s not like Elton’s songwriting credentials have ever been in doubt. But it was a testament to his talent that when accompanied simply by his own piano, these melodies remained vital and strong. Every single one of them was met with a standing ovation.

You’d normally associate an icon like Elton John with huge stadium concerts, and when considering the comparative merits of seeing his full Las Vegas show or this tiny acoustic version, both would be fundamentally amazing in different ways. The Union has found him in a raw and honest musical place and so tonight it made absolute sense for him to arrange those songs in this way. Ending with one of the finest of those new tracks, When Love Is Dying, he made sure he went with an emotional flourish.

Elton John has a thousand different options when it comes to performing the perfect live show, but seeing him without any of the usual accompanying glitter and pizzazz in an intimate setting like this felt like the best one.