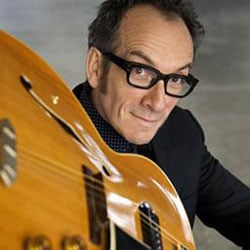 In a Meltdown Festival characterised by songwriters and storytellers, the securing of Elvis Costello was entirely appropriate. A curator himself back in the heady days of 1995, he commented tonight, perhaps sarcastically, on how at the time there were sneers that the South Bank Centre was being taken over by pop stars. They shouldn’t have worried. The festival has been able to try out all genres over the years, and has consistently turned up some of the best music events of the year.

Accessorised by his trademark thick-rimmed specs and a natty black and white hat, Costello took to the stage still looking just like he always does. His aesthetics may not have noticeably changed, but over a career stretching back to 1977, he has admirably defied expectation and hardly stopped for breath, creating a prolific back catalogue touching on whatever was inspiring him at the time. While that quest for musical fulfilment has brought collaborative albums with the likes of the Brodsky Quartet and Burt Bacharach, tonight he was on his own as he took us through a brief history of his songbook.

His debut album My Aim Is True was represented by Alison with its heart-tugging melody, and a paranoid Watching The Detectives full of distorted pedal effects as the song descended into madness. He also played old favourites A Good Year For The Roses and Everyday I Write The Book, a song he claimed to have fallen out of love with before he was taught how to sing it properly.

Three songs in a row from forthcoming album American Ransom could have messed things up but they turned out to be quite charming. While it was never going to be easy to sell new and unfamiliar material, his trick of naming his characters and using them to develop storylines reaped rewards. Jimmie Standing In The Rain in particular stood out. That sharp characterisation has always been one of the most appealing aspects of Costello’s work and tonight Veronica, a song inspired by his grandmother’s battle with Alzheimer’s disease was a treat. Meanwhile the mood lightened when Radio Sweetheart found itself segueing into a version of Van Morrison‘s Jackie Wilson Said (I’m In Heaven When You Smile) and once the crowd starting participating in the doo doo doo doo doos, there was no stopping them with the call and response section of God’s Comic.

For those of us who hadn’t seen him play live before, Costello’s voice surprised with its depth and richness and his guitar playing with its accuracy and agility. Ploughing through his two-hour set alone, he was eventually joined on stage by man of the hour Richard Thompson, making a further welcome appearance at his Meltdown Festival for a run of songs including Shipbuilding and the last song of the night (What’s So Funny ‘Bout) Peace, Love And Understanding. Not quite a greatest hits set without Oliver’s Army or Accidents Will Happen, but it served as a reminder of a talent to be proud of, a nice look ahead to his next adventures and a message back to those who sneered at him all those years ago that he was always more than just a pop star.