by Daniel Paton
published: 21 May 2011 in Live Music Reviews
Tweet 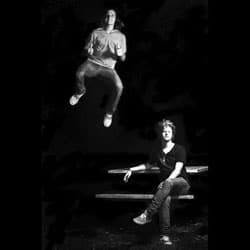 It’s a novel approach to concert promotion that schedules the opening act 15 minutes before the venue website suggests the doors open, but such were the conditions the admirably stoical Julianna Barwick faced at this otherwise excellent Stag & Dagger-arranged event. Unsurprisingly, her audience was a bit thin.

This was a real shame given her distinctive power as an artist. Her album The Magic Place has received richly deserved acclaim, and watching her build up its extraordinary one-woman choir through the use of samplers and loops was completely enthralling. Whilst this technology can enable, it can also render artists curiously impotent, glued to their machines on the floor. Barwick wisely uses a table, and it’s clear that she’s every bit as involved with the music itself as with the process of making it. Much of the time, her eyes are closed in thoughtful reverie.

Barwick’s music presents something of a paradox – it is at once minimal and expansive. The limited time span on her looping system means that there are a limited number of chord changes as such but she responds to this by adding layer upon layer to the vertical harmony, making it richer and broader. Sometimes, it’s just a thickened layer of consonant beauty – at other times she emphasises peculiar dissonances. The overall effect is resonant, contemplative and beautiful.

The drummer-less drones and textures created by Emeralds are a little harder to describe or define, but are arguably no less exciting. Watching them live is something of a revelation in fact. On record, they seem serious, pensive and searching. In concert, they seem like a remarkably unconventional rock act, with Mark McGuire adopting guitar hero poses and drawing out an impressive array of often blues-based licks that sit brilliantly above the multi-faceted synth noise created by John Elliott and Steve Hauschildt.

It’s a compelling spectacle as much as it is an aural treat and appropriately overwhelming from the senses. Material from the outstanding Does It Look Like I’m Here album is developed through a sort of vigorous, iconoclastic musical attack. Amidst the layers of fuzz and noise is a heightened element of melody. There is a genuine sense of spontaneity and excitement in the way Emeralds perform.