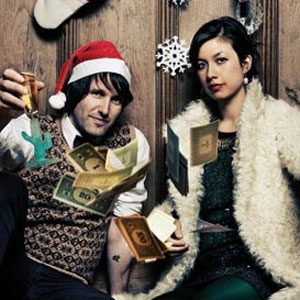 It might be our last night on earth, but who cares about the coming Mayan apocalypse when there’s Christmas songs to be sung? A year ago Ash’s Tim Wheeler and his glass-voiced chanteuse girlfriend Emma-Lee Moss (Emmy The Great to you and me) released their excellent This Is Christmas record, a collection of well crafted festive pop that combined Moss’s elegant, witty writing with Wheeler’s knack for a cracking hooks and melodies. They celebrated with a dizzily fun one-off show at the plush Bush Hall. A good time was had. A year on and the settings switched to the slightly more cavernous Kings Cross Scala and the ebullience isn’t quite as easy to channel.

The weather outside may be frightful, but it’s quite chilly on stage too. The songs, from the opening dash through Darlene Love’s Marshmallow World through originals like Sleigh Me, Home For The Holidays and the brilliant (Don’t Call Me) Mrs Christmas stand up rather well and Wheeler is his usual shape-throwing self, but Moss looks uncomfortable, her usually sharp banter is muted and she makes an awkward centrepoint to the stage. Things do begin to thaw though- a smattering of well-chosen covers, kicking off with The Ronettes’ version of Sleigh Ride and Wham’s Last Christmas begin a definite defrost and some of the tinsel and fire returns to their eyes.

For the most part it’s knowingly cheesy fun- the undead stagger through the audience for Zombie Christmas, Wheeler and Moss do a sincere rendering of East 17’s 1994 hit Stay Another Day, sharing a single stool and simultaneously rising on cue for the songs climax, there’s an encore of Elton John’s Step Into Christmas and the duo’s own brilliantly bonkers punker Jesus The Reindeer is delivered with twinkly-eyed joy. The pair certainly know their Christmas songs, with the more traditional festive fare being joined by The Ramones’ Merry Christmas (I Don’t Want To Fight Tonight) and Julian Casablancas’ version of I Wish It Was Christmas Today, while the Elvis standard Blue Christmas done as an acoustic duet is genuinely lovely.

“We’re hoping to make this a Christmas tradition” says a sharp-suited Wheeler at one point, and as a double whammy of Have Yourself a Merry Little Christmas and a very welcome Fairytale of New York (“thank you for not going to see the Pogues tonight” says Moss) closes proceedings that seems like no bad thing. If it’s the end of the world as we know it, here at least, we feel fine. Same time next year?