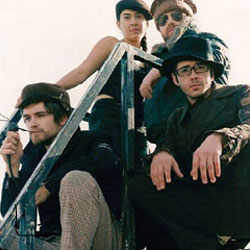 The second day of the inaugural End of the Road Festival has a line-up to die for, so waking from an autumn night that harbingers winter’s onrush like a trumpet in the ear is a pretty happy event. At nine a.m. some parties from the night before are still going on around the tent, but for those who have grabbed some hours, the real fun’s ahead.

Art-punk is an art-form hard to pull off at 11.45am, but Ladyfuzz do their best to get people off their asses as the wonderful Larmer Garden Main Stage bakes in sun. Flashing in the rays with electric blond hair, lead singer Liz Neumayr is like Justine Frischmann on heat as she bounds around stage, doing her best to rouse herself into the set. Raucous nuggets like Bouncy Ball though can rarely have been woken from wherever it is that songs sleep at this early hour, and reactions are inevitably muted.

Whoever coined the evocative phrase “the dog from the sea” for the festival’s first Swedish act, El Perro Del Mar, has got it pretty much spot on. Helped along by a band in immaculate matching tuxedos, her music floats into the gardens like sun-tinged mist, all laid-back and emotional and effortlessly accomplished. Sarah Assbring (AKA Mar) comes across as a pretty classy lady, all relaxed garb and immaculate short hair, happy to let her songs do the talking to the seated masses, in her peculiarly comfortable demeanour having the regal songwriter air that now accompanies the likes of Darren Hayman around indie outposts.

Glasgow’s My Latest Novel add their unmistakeably literary air to Saturday’s proceedings. With instruments galore and a quaintly intellectual Scottish charm in abundance, their live show is like a freeform art exhibition, poetry and song finding joint home in a set that speaks profoundly to the early evening crowd. The Novel’s incorporation of folk’s more cerebral elements into their slow-burning indie is seamless, and their guitar, xylophone and melodica licks ease us perfectly into the imminent, mouth-watering Scandinavian showcase up in the character-full Bimble Inn.

Event organiser Sofia is a Swedish gal, and vying for space on the playing field which spreads out in the centre of the venue, along with a football pitch that hosts a captivating game involving the dancing bears which escape from the end of The Boy Least Likely To‘s enjoyably quirky set, are numerous esoteric Viking games, including a mellow affair called Kubb, where you have to knock down bases with, rather disappointingly, a strictly under-arm throwing technique . It’s the bands however that really capture the imagination at this point, and a choice selection of some of the best in Sweden’s booming scene gathers under the Bimble’s friendly canvas.

First up are Fanfarlo, a band now resident in London, who hold the Inn’s revellers captivated with a sunny spray of canny indie pop. Boy Omega‘s Martin Henrik Gustafsson was splendidly named after Tottenham Hotspur’s legendary striker Martin Chivers, and the grand impression created by this fact is increased by his scuzzily emotional acoustics. If any of the Swedish acts had such thing as an ego then they’d maybe be up in arms about being lumped together in one tea-time fandango, but the very fact that they haven’t is possibly the thing that makes each one, in their own individual ways, musically irresistible, and the showcase thus an inspired organisational move.

Gothenburg’s Hemstad take it up a few notches and buzz to irresistible keyboard refrains, while Suburban Kids With Biblical Names subvert us with a terrific and humorous alt folk charm. Alas, Christian Kjellvander‘s set has begun with a couple of whisky-soaked gems, so it’s pretty hard to pull ourselves away from the charming little Inn, until of course recalling who’s up next back at the Big Top. When you think of a guy to bridge the gap between veteran, inspired End of Road selections like Charley Parr or Howe Gelb (coming up tomorrow) and indie newcomers like Flipron and Hush the Many, Ex-Hefner man Darren Hayman jumps to mind with summersaults. It’s a masterstroke by the organisers to have him here, spanning the generation gaps, and quite possibly pinning the whole thing together.

Hayman has been touring the smaller UK venues under his own name recently, and though it’s been a pleasure to witness his songs in smaller environments, it’s a blast to see him back under the bright lights. The crowd are actually a little slow to catch on, and early tracks like the typically lustful and poetically-wrought Pull Yourself Together are witnessed by only a hardcore few. His new tracks, wheeled out with typical Hayman ease, have the familiar character and quality of classic Hefner numbers, and by the time he launches into the sublime Breaking God’s Heart, the hordes have arrived to share in the brilliance. A bona fide hero of modern UK indie, this guy really has no time for the kind of mainstream fame he deserves.

Dual headliners Badly Drawn Boy and Guillemots in their own way each represent something noble about the End of Road line-up policy, the latter at the moment sitting at the top of the tree (popularity and fame-wise) of alternative indie chancers. Guillemots attract a huge crowd to the Big Top for their 10.45 start, and tracks like the enigmatically rocking Trains to Brazil and splendid Madeup Lovesong induce glorious chaos while balloons fill the air, Fyfe Dangerfield sitting there wabbling that mop and twirling his legs, yet you feel there’s still a lot more to come in the band’s quest to overcome all the trappings of fasionability.

This is something that’s presumably never really worried Damon Gough, and back at the Main Garden Stage he speaks to the peacocks and fans with a cheery, cidery air. Gough does rocking with a certain grandfather-like reluctance, and the rendition of new track Born in the UK is typically charming in that uniquely grudging kind of way he has.

The Boy done good further entertains with a number of new tracks and a sprinkling of his peculiarly lilting hits, Silent Sigh and Once Around the Block particularly reminding what an understated treasure he is, and when he promises to return next year, and everyone agrees to do it with him, it’s an emotional bit of mutual End of the Road love.

With Gough’s shuffling, unassuming demeanour and humour and the Guillemots’ alternative ambition, they’re the logical choices to sit at the top of today’s line-up, but really it could have been any of the above. A tremendous second day, with parties and random revelry that reaches deep into the night.