by Michael Hubbard
published: 30 May 2017 in Live Music Reviews
Tweet 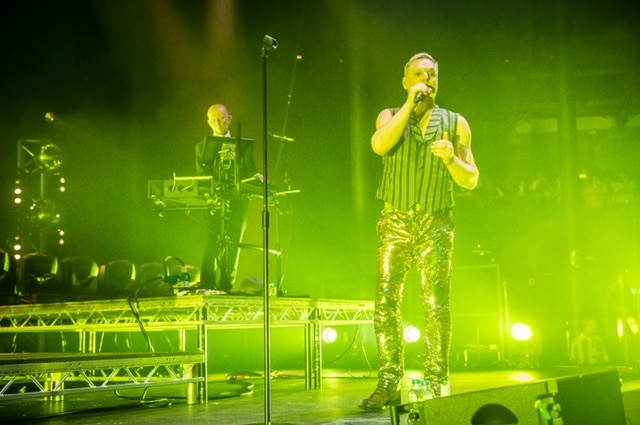 Erasure has been a going concern for over three decades, in a career spanning songs in the hundreds, gigs in the thousands and sales in the tens of millions. In a week in which senseless barbarity brought death to the pop spectacle of Ariana Grande‘s gig in Manchester, and a fire caused the evacuation of Erasure’s own show in Glasgow, the duo’s all-inclusive pop celebration at the Roundhouse was a well-ordered balm, one in which the line “Are we divided? Why can’t we be together” from It Doesn’t Have To Be took on poignant new meaning.

For all the show’s expected spangle and major-key pop nous, Vince Clarke and Andy Bell’s just-released 17th album World Be Gone is something of a descent into the depths, at least lyrically. A largely reflective, introspective work, like Clarke’s erstwhile compadres Depeche Mode‘s latest, Spirit, it is a work seemingly affected by world events. Here is music that tightropes twixt the personal and the political, and its mood is fittingly if rather relentlessly melancholic.

In context of the fruity high camp of an Erasure show – tonight’s backdrop is made up of mirrorballs, and Bell and his two backing singers are sparkling, mirrored bacofoil visions of silver – the mid-tempo pace of much of the new material felt at times like something to be indulged rather than loved. But this material did reveal sides to Erasure’s music that are less celebrated. The title track brought out Bell’s dramatic vocals in a way their jollier bangers do not, and the pining of A Bitter Parting was certainly a brave follow-on from Sometimes, while Sweet Summer Loving felt valedictory; Clarke’s funereal garb, an on-point black suit standing stark amid the shininess resplendent all around him, here seemed appropriate. The exceptions from the new material were the album’s bookends, starting with the single Love You To The Sky, which hardcore fans were already happily singing along to, and closer Just A Little Love.

But Erasure’s longevity was not built on such moments, and the biggest bangers of their career were as ever present and correct. Oh L’Amour went beyond singalong, as just about the entire audience seemed to be hollering along. Stop! had the whole room dancing. Blue Savannah – a firm fan favourite – sounded as fresh as ever. Chains Of Love enjoyed a souped-up eurodisco makeover. They reminded, were reminders necessary, that Erasure’s back catalogue contains some of the best pop songs ever penned. 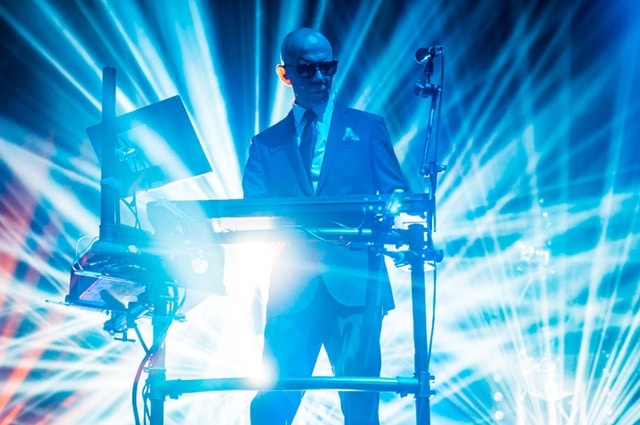 Clarke’s efficiency of performance was remarkable to witness. Occasionally picking up acoustic guitar, he more often busied himself with merely pressing buttons on his minimal in extremis set-up. For his part, Bell is also less frenetic these days, sticking mostly to the front of the stage and even sitting down to perform Sometimes. Yet if the duo lacked visual energy, their material – and their audience’s reaction to it – plugged the gaps.

The inevitable encore of A Little Respect continued to be sung splendidly by the audience long after the band had departed, the good natured camaraderie between friends and former strangers lasting all the way down the stairs and out into Camden. This was an affirming evening that brought people together, underlined what mattered and, just for a couple of hours, banished the cruel world by the powerful magic of pop.

Erasure played: Breath Of Life, Drama!, It Doesn’t Have To Be, Love You To The Sky, Oh L’Amour, Ship Of Fools, Chorus, Oh What A World, Just A Little Love, Blue Savannah, In My Arms, Sweet Summer Loving, Knocking On Your Door, Love To Hate You, Sometimes, A Bitter Parting, Still It’s Not Over, Phantom Bride, Here I Go Impossible Again, Stop!, Chains Of Love, Always, World Be Gone, Lousy Sum Of Nothing, Take Me Out Of Myself, Victim Of Love Encore: A Little Respect

Erasure’s World Be Gone is out now through Mute. They support Robbie Williams on tour during June and July, and have announced a European headline tour in 2018. Tour dates and further information can be found here.