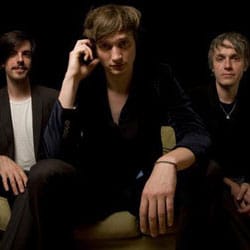 Having released one of the best debut albums of the year back in January, Erland And The Carnival seem to have been touring for most of 2010, promoting their attractive blend of indie psychedelic folk rock.

Now firmly established as a headline act, they are supported at XOYO by Anglo-Italian singer-songwriter-guitarist Anna Calvi, whose own debut album will be released through Domino at the start of 2011. Praised by Brian Eno and Nick Cave, Calvi is already making an impact with her darkly atmospheric stories of full-blooded passion, where romance comes with a hint of danger. Mixing disparate influences such as jazz, flamenco and rock ‘n’ roll, she bears comparison with Patti Smith and PJ Harvey. Strikingly clad in scarlet and red, she has the dramatic presence of a femme fatale, ably supported by Mally Harpaz on harmonium and percussion and Daniel Maiden-Wood on drums.

Erland And The Carnival begin their hour-long set with a haunting instrumental intro strongly reminiscent of Bernard Hermann‘s score for the Hitchcock film Vertigo. Though best known for their contemporary arrangements of traditional Scottish and English folk songs, mixed in with ’60s-style psyched-up garage rock, there is also a distinctly spooky quality to some of their music. Their freaky fairground organ sound, generous use of effects pedals and offbeat rhythms suggest a carnivalesque abandon.

Fronted by the charismatic Orcadian Erland Cooper, the band put on a lively performance of almost all of the songs from their album plus a few new ones. Their cover of Jackson C Frank‘s My Name Is Carnival (from which they took their own name) sets the tone, while current single Trouble in Mind has instant appeal. The fast-paced You Don’t Have to Be Lonely features delicious swirling organ and vocal harmonies, with delicate new song Nightingale making a nice contrast.

If Gentle Gwen sounds like a fuzzed-up folk song by The Coral, Was You Ever See has The Doors‘ Ray Manzarek-style organ-playing. Probably the highlight is the stunning twist on medieval-style hymn chanting of Love Is a Killing Thing (with a melody by Ewan MacColl and Pete Seegar). The two encores also go down well: while The Echoing Green (with lyrics based on poetry by William Blake) is gently mysterious, the starkly modern re-telling of folk standard The Derby Ram makes a powerful ending.

With his eyes sometimes closed as if in a trance, the tall, black-clad Cooper cuts a shamanic figure, as if tapping into the pagan rituals of The Wicker Man. The discreetly effective reverb guitarist Simon Tong (formerly of The Verve and The Good, The Bad And The Queen) and drummer David Nock (from Paul McCartney‘s experimental side project The Fireman) are here bolstered by a bassist and keyboardist.

No doubt due to it being a freezing tube-strike Monday night the basement venue is not full, but when we emerge from Erland And The Carnival’s distorted, dream-like gig the outside world seems to have changed into a surreally deserted and snowbound landscape as if the music’s spirit carries on.