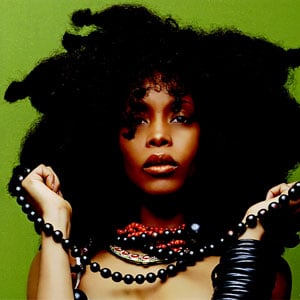 All hail the high priestess of cosmic-funk and soulful grooves, Texas-born singer and band leader Erykah Badu. Stepping on stage at the Hammersmith Apollo in front of her well-oiled 11-piece band, she radiated an unwavering command of allegiance. Maybe it was the big tan hat, the bright skinny orange jeans or the patent leather mega heels that demanded attention from the packed house. Or perhaps it was the outlandish cream raincoat with its stylish cape in its part banker, part superhero function that signalled it was time for business. Regardless, the drifting haze of weed smoke meant it was time to kick back and listen to the Dallas native sing and sing and sing, and keep every ass moving as she did. The crowd was not to be disappointed.

Playing as part of the annual BluesFest party, which graces assorted stages in London and beyond for two weeks, Erykah Badu is clearly the most challenging and current of the acts; the rest of the festival veers between blues revival acts of Ronnie Wood and Hugh Laurie to the armchair jazzmatazz of George Benson. And really there’s scant evidence to suggest she fits into the world of the traditional blues at all, other than the arresting moments where she sounds like a dead ringer for Billie Holliday on Appletree, from 1997 album Baduizm, where the ‘tree’ and the ‘fruit’ (“It was a stormy night” and “See I picks my friends like I pick my fruit”) recall Holiday’s eerie 1939 tale of Southern lynchings in segregated America.

But it’s at that point that the blues ends and the massive jam band Badu experience begins. Flanked by a drum machine and sampler at the front of the stage, Erykah led the ‘peace and love’ train through a wild 90-minute set of head-bobbing soulful funk. Surrounded by a crowd hanging on her every line, each song heralded audible satisfaction from the largely-female onlookers who were clearly steeped in her music.

To the uninitiated it sounded like one big ‘ole barrelling song punctuated by the superbly-crunchy and far-out bass playing of Los Angeles’s Thundercat, who last year released a 30-minute mixtape mixed by Flying Lotus. Hanging back deep in the pocket throughout the night, his reverberating basslines controlled the ebb and flow of the gig as the highly-choreographed set unfolded around his impressive and weighty anchor. So it was a shame that when it came to Erykah’s introductions of her band members, she only granted Thundercat a brief cameo. But he seized it with a mesmerising run of the fretboard while keeping hold of his rhythmic trump card.

The brief introductions happened mid-set – or around the time that Erykah had shed the hat, the cloak, and her initial nervousness – and was really letting rip from beneath her wild mane. Considering she feigned signing off after just six tunes, Erykah regained her groove and admitted to the gyrating crowd, “I do this cause it feels good. I do this for therapy!” While she expressed herself, it was left to the rest of the band to hang on her every cue, executing a faultless performance full of well-rehearsed and cunning riffs, segues and breaks that seemed to keep doubling back on themselves, which allowed for a few tracks from her classic album Mama’s Gun, a fitting extended take of On&On or on the lovesick Twenty Foot Tall from New Amerykah Part Two: Return of the Ankh.

The chorus of four backing singers, keyboard player, light-as-feather guitar licks and the stage-romping flautist combined with the super-tight rhythm section to ensure that whichever direction Erykah headed she was never left exposed in a funkless vacuum. And fair enough. She’s got an incredible voice, both strong and rounded, that could easily carry the crowd without all of the band’s over-the-top pyrotechnics. But for the 41-year-old singer, who seems to be set to stand as tall as Grace Jones as she goes on and on and on, this mama had shot her gun for the night. And without an encore, it was goodnight.