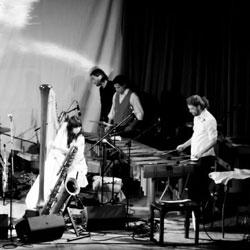 Esmerine may be one of several musical projects to branch away from Godspeed You! Black Emperor but latest album La Lechuza sees them succeeding in standing apart, very much pursuing their own distinct sound and also providing the occasional surprise along the way. To some extent they have followed a similar trajectory to fellow GY!BE side-project A Silver Mt. Zion, the rigid, sober instrumental alt-chamber approach of early albums being followed by albums that are freer in nature, often incorporating vocals and a wider-ranging sound palette. Tonight’s show was downgraded from the Union Chapel to Electrowerkz, a move that initially seemed disappointing – the gothic beauty of the former venue appearing to be a perfect fit for their music. However, the smaller, more secluded Electrowerkz was to prove equally as appropriate.

Support came from Oh Ruin (Irish singer-guitarist Eoin O’Ruinaigh) who played a set of raw, exposed songs that sat somewhere in between the darkness of mid-period Bonnie Prince Billy and the confessional intimacy of Josh T. Pearson. His vocals occasionally also matched the untethered quality inherent within those of Tim Buckley. His engaging in-between song interactions with the crowd may have sat slightly at odds with the strained nature of the material but helped elicit a positive response.

Last Waltz was the only track of the night to feature vocals. They were sensitively imparted by harpist Sarah Page, and almost made her sound like a tempered Joan As Police Woman. They opted not to attempt the other tracks on La Lechuza that feature vocals, which although not a surprise, did mean that the show was deprived of some of the highpoints and poignancy of the album. They closed with Little Streams Make Big Rivers, taut cello and stark drumming combining before playing out to an intense, slow-rising climax. With eyes closed, it could have been Godspeed You! Black Emperor themselves. The evening also offered reminders of other bands, namely the parched desolation of Dirty Three and string-based purity of Rachel’s.

The band returned to play an encore of two short pieces, both of which were not included on the recent album. The first was formed from the fragile sounds emitted from a music box, embellished with more harp and cello. They then closed the show with a second piece that Page light-heartedly referred to as ‘glock-rock’, glockenspiel and drums joining forces to end the show on a fast-paced, high impact note. It offered proof that this group of musicians is still a strong creative force, able to tweak their sound to capture a variety of moods and atmospheres.