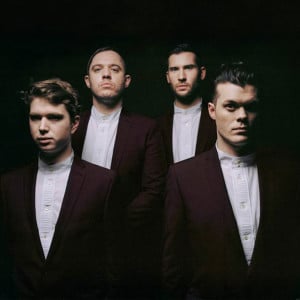 Inside Academy 2 this evening – or, as those approaching or over the age of 30 remember it, the University of Manchester Student Union’s Main Debating Hall – a welcome series of Kraftwerk tracks play over the PA system.

Minutes later, Everything Everything arrive on-stage, dressed in red and black; main singer Jonathan Higgs looks like a sort of hip preacher with a sort of red stole-cum-sash thing draped over his black t-shirt, while the rest sport red bomber jackets with black trim over black tees.

It sort of sums Everything Everything up: a modern pop band not succumbing to cliché yet unafraid to show off their influences. It’s witty; canny, even. And it can only be a good thing.

It reflects on who’s here this evening: students on a typical night out taking selfies by the dozen through to those who, let’s face it, probably aren’t into selfies. Everyone is flushed with enthusiasm; this is Everything Everything’s first Manchester gig since their residency at the now wonderfully refurbished Central Library, with new material being premiered. There’s a homecoming warmth of sorts. They do all live around these parts now after all, with Higgs a former student at the University of Salford.

They waste no time, going straight into new one To The Blade: a sort of cross between a Radiohead-lite, a bit of Heaven 17 synth and some rather conspicuous 1980s rock riffs. It augers well. Kemosabe from 2013’s Arc follows, with its Talking Heads and Brian Eno circa Another Green World leanings piercing through.

Yet what’s satisfying is that, ultimately, Everything Everything make these influences their own; from appreciating these tracks on a simple level because they’re catchy and bloody decent, through to looking at them from a more chin-stroking perspective.

New track Regrets is fairly post-punky and goes down well, before Don’t Try comes and gets a tremendous response: on the one hand conventionally rousing with its dance beats and loops but on the other peppered with Robert Fripp-esque riffs. Most, if not all, are dancing. And it’s impossible to keep up with Higgs’ vocal which, at times, goes like the clappers; there’s tonnes of energy here.

Radiant’s funk-cum-afrobeat rhythms bring things to a more laid-back level, while new track Spring/Sun/Winter/Dread brings things up a notch before MY KZ UR BF from 2010’s debut Man Alive raises excitement once again. Indeed, by comparing MY KZ UR BF to their more recent and newer material, you realise how confident and accomplished Everything Everything have become. MY KZ UR BF, despite being upbeat and full of indie poppiness, feels rather obsolete now.

New track Fortune 500 shows this: powerful dance sounding beats aplenty played by drummer Michael Spearman while Higgs passionately lets his political frustrations out with lyrics centring around a protagonist being made to feel loved by the Establishment, before going on a murderous rampage and “the people [he’s] doing it for”. This is dark and brooding. Again, there’s something of the Radioheads about this, even if not overtly so. It lives up to the hip preacher image, anyway.

New single Distant Past contrasts Fortune 500 and is arguably something of a bridge between the older material and the new: hip-hop overtones aplenty, especially with Higgs’ rapid vocal, before launching into a sequence of infectious bass and beats. It’s difficult not to like this track, which will likely be one of those that takes festivals and the summer by storm.

In many respects, Everything Everything are the ultimate crossover band. Their natural flair and ability to write tunes alongside the genre-hopping and clear, diverse influences means they’ll only grow stronger. They won’t be playing Academy 2 again for a long time. Bigger things beckon.