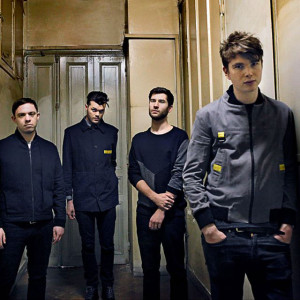 After cancelling their show in Liverpool due to lead singer Jonathan Higgs losing his voice, there was some concern as to whether Everything Everything would be able to perform at the Academy in Bristol. Despite assurances that the cancellation – their first in six years – would not affect the rest of the tour, Higgs’ unique vocals are so instrumental to the Manchester four-piece that it wouldn’t have been a surprise to see more dates postponed.

However, while the tour had clearly taken its toll on Higgs’ vocal chords, he still managed to show off his impressive range at this gig, where the band finally made the step up from their usual Bristolian venue of choice, the Thekla, for the first time. It was a promotion that was long overdue and reflected the fact that Everything Everything are now one of the most exciting and entertaining live bands in the UK – a reputation they cemented during tonight’s packed show.

Ditching the matching grey boiler suits that became so recognisable during their tour of debut album Man Alive, the band were given a heroes’ welcome when they sauntered onto the stage, before launching into a mesmerising version of Undrowned from latest album Arc. The track – which has more than a touch of Radiohead about it – is a slow-burning masterpiece; one that nicely sums up the emotive sound of that album, and it proved to be a perfect opener.

It was quickly followed by fan-favourite Qwerty Finger, with its frenetic guitar riff and Higgs’ remarkably quick delivery even more astonishing considering his recent vocal troubles, while signature song My Keys, Your Boyfriend had fans singing the chorus back to the band with added gusto. Another Man Alive highlight, the brilliantly off-kilter Schoolin’, was also on the receiving end of a madly enthusiastic response.

Yet, as good as the material from Everything Everything’s debut sounded, the impact that Arc has had on their live set should not be underestimated. The band have always been a supreme live act, but the very nature of their compositions – including Higgs’ falsetto – made them somewhat difficult to interact with in the live arena. However, unlike its predecessor, Arc is far more relatable and anthemic, and it showed throughout their set.

Songs such as Torso Of The Week and Duet certainly don’t compromise Everything Everything’s signature sound, but they also achieved an instant connection with the audience. The harmonies in Duet were particularly fruitful, providing plenty of opportunities for big sing-a-longs, while the infectious chorus on Torso Of The Week also went down a storm.

The melodic fourth single Don’t Try was another highlight, demonstrating the band’s newfound balance between intricate layers and a more straightforward, anthemic direction, with its beautifully engaging chorus. Elsewhere, Kemosabe had the entire crowd belting back the tribal shout of “hey” on its addictive chorus, before Everything Everything brought out classics Suffragette Suffragette and Photoshop Handsome to conclude the main set.

Following a brief break, the quartet returned with the soaring Radiant, before closing the set with Weights, which ended the night on a celebratory note. But it was the wacky Cough Cough, sandwiched in between the two, that received the biggest reception of the encore – and of the night. The band’s pitch-perfect harmonies swirled around the room as the song’s manic production whipped the crow into a frenzy, leaving everyone thoroughly satisfied.

They may not be everyone’s cup of tea, but on the back of this showing, there is no doubt Everything Everything will just get better and better. How Arc was overlooked for a Mercury Prize nomination still beggars belief, but it sure does sound good live. Everything Everything are all but unmatchable just now, and their individuality should see them top the bill for years to come.