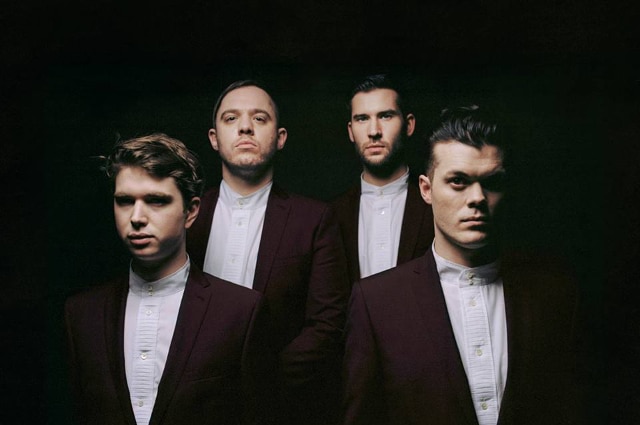 The hands in the air tonight, though, are at a sell out London gig from the quartet where the Mercurys’ loss is most definitely Brixton Academy’s gain. Regrets? Only two, as “REGRET! REGRET!” is hollered back at the band by their exultant audience, part of one of their most popular songs to date – and with support act Stealing Sheep on backing vocals.

This is a night illustrating not just how far the band has come, but also where they could go from here. Unexpectedly, lines such as “You are a thief and a murderer too, stole the face that you wear from a craven baboon” find themselves turned into football-like chants, Jonathan Higgs finding that even if he stops his trademark high register vocals, the crowd are more than ready to pick up the baton.

There are freshly tender moments to the set, giving the band’s expression more breadth than before. Warm Healer is where the music ought to take a breather, though unsuspecting people who see this as a signal to head for the bar have their heads turned by the depth of emotion Higgs unveils in the chorus, followed by a wall of keyboard sound you simply have to dive into. By contrast the set and album opener Blast Doors sets the tone for the night, the rat-a-tat vocals ducking and diving in and out of the urgent keyboards and guitars.

There is so much more to Everything Everything than vocal virtuosity – which in the live environment is admittedly stunning – for the primal dimension to their music is coming through with ever greater intensity. The vocals may be too clever on occasion but the band have managed that all-too rare achievement in music these days of combining brilliant musical hooks with unusual tag-lines. The appearance of Talking Heads in the DJ set prior to their appearance is a telling guide to influences, but in truth the Everything Everything sound is unlike any other.

No Reptiles brings all these elements together, and with little banter from Higgs on stage this is the one song where thoughts of recent gig horrors in Paris resonate deeply. “It’s alright to feel like a fat child in a pushchair,” sings Higgs above swooning keyboards, “Old enough to run, old enough to fire a gun.” And for an unknown, telephathic reason the crowd is right there with him.

This, the first of three encores, precedes a pair of euphoric favourites, one old (My Kz Ur BF) and one new (Distant Past). Bathed in a warm glow, they send the crowd into raptures, Distant Past’s big 1990s-style dance riff sparking thoughts of later night clubbing. Higgs is knocked out. “We really feel like we’ve made it here tonight,” he proclaims with genuine feeling. And you know what? They probably have. Who needs the Mercury Prize when Brixton Academy is so utterly onside?