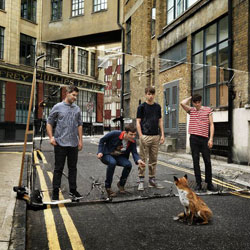 It wasn’t long ago that Jonathan Everything told us that he was looking forward to his band’s debut album to be released. Then when it’s time for headline tours their audience will know the songs. When the inventiveness and manic joy of Man Alive finally landed it came as a welcome surprise to many and surpassed a lot of expectations.

So he deserved some wish fulfilment, and tonight the Everything Everything four-piece was to be found topping the bill at a crammed Scala. And not only were people not confused by the songs, but a lot of them were singing along. Which, if you’ve heard Man Alive, is not a skill to be sniffed at. Of course the audience weren’t on the stage so can get away with crimes against the lyrics. But part of the cynical glee of seeing Everything Everything live was to see how Jonathan was going to cope with a lyric sheet so complex and scattered, it would make someone with Tourette’s syndrome wonder what’s going on.

In fact our lead singer pulls it off without faltering. Commanding attention away from the other three, everything he does is executed exactly and deliberately – perhaps that’s how you deal with the volume of words that tumble out of his mouth. His performance is spot on and bolstered by a few choreographed hand gestures (sing “hungry” = point to tummy. That kind of thing).

The set list pretty much covers the album. From the potentially difficult transitions in time signatures on Qwerty Finger through to the closing encore of Photoshop Handsome, the whole band recreates their sound faithfully, while using the live setting to add extra dimensions to these songs.

They chop the order up a bit, shoving recent attention-grabber My Kz, Ur Bf in the middle of the set, and saving Photoshop Handsome till last, with those two songs seemingly locked in a fierce tussle for the position of “signature tune”. This leaves Final Form and Two For Nero side by side, demonstrating that they can do “spine-tingling” just as effectively as they can do the rock-out that happens on Suffragette Suffragette. And that they’re certainly more than just a quirky indie band.

Nonetheless, their eccentricities will, for now, leave them loitering on the fringes of popular music. But having a stunning debut album and being able to back it up and indeed enhance it with such an entertaining live show will keep the word Everything on a lot of people’s lips for some time yet.