Everything Everything @ Village Underground, London 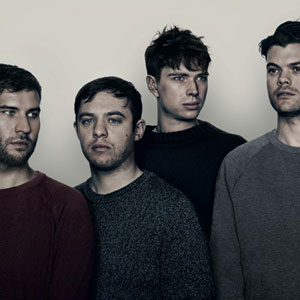 Everything Everything seem to have dodged a bullet. Their debut Man Alive won them critical acclaim and a devoted following, but not a large one. With their unassuming demeanours, obtuse lyrics, and complex arrangements, they’ve managed to avoid the hype machine and thus dampen down expectations for the follow-up.

This tour gives fans the first chance to hear a handful of tracks from Arc, due in January, and early indications are that it should allow Everything Everything to make the leap to more mainstream success, and aim with confidence for a summer of festival triumph. The idiosyncracies and intricacies of Man Alive remain, but there’s a new directness to the songs, with arrangements focused on delivering the hooks as soon and as often as possible. Dressed in smart new blue jackets, replacing their traditional grey boiler suits, they take to a stage in this cavernous red brick venue and launch into crowd-pleaser Suffragette Suffragette. It’s a fine space for a gig, and kudos to whoever saved it from flat conversion or an agonising existence as a Social Media Architecture agency.

It’s a strong start, backed up by the frenetic Qwerty Finger, but as the set goes on the quality of the new material highlights the faults of the old. MY KZ UR BF features perhaps their best known chorus, but arrives at it via the most twisty, impenetrable route. Final Form meanders and loses its momentum several times. And the new Everything Everything would never allow a hook as strong as the whistled notes on Schoolin’ to be let down with such an ordinary chorus. In contrast, the first two untitled new tracks aim for the refrain with marksman-like accuracy, featuring pulsing synths, hip hop beats, a widdly guitar solo, and a curious sample that’s something like a glass being repeatedly tapped, like a best man trying desperately to get his speech started. Don’t Try showcases Jonathan Higgs’ ability to create infectious melodies out of what is basically a bit of scatting, before heading to a noisy percussive climax, like Woodkid‘s Run Boy Run with extra wood.

There’s certainly nothing simple or safe about the new songs showcased – they still run through more genres and ideas in each song than many bands manage in a career – but there seems to be less tendency towards wilful obscurity. This extends to the lyrics too, as classics like “Pedigree Chum, I’m never your Father” are replaced with decipherable and even intelligible phrases like “I’m at the border…I’m out of my depth” and “Do you feel left behind, like there’s something not right?”. Out of the seven unfamiliar tracks played, only the somewhat flaccid Choice Mountain fails to make an immediate connection with the audience.

This new-found desire to communicate hasn’t quite yet found its way into the band’s performance. An additional keyboardist has allowed Jonathan to roam around with the microphone on certain songs, but he hasn’t quite worked out yet what to do with this freedom. But the dazzling lights add a certain impact, and there’s a feeling that they’re just itching to get to the larger venues, where their most expansive, epic moments will begin to make sense and take shape.

The set ends with recently charting single Cough Cough, and its rapturous reception bodes well for 2013. The difficult second album is an accepted truth. But on tonight’s evidence, by making their debut album as difficult as possible (for themselves as well as the listener), Everything Everything are in the strongest position possible to avoid that particular curse.