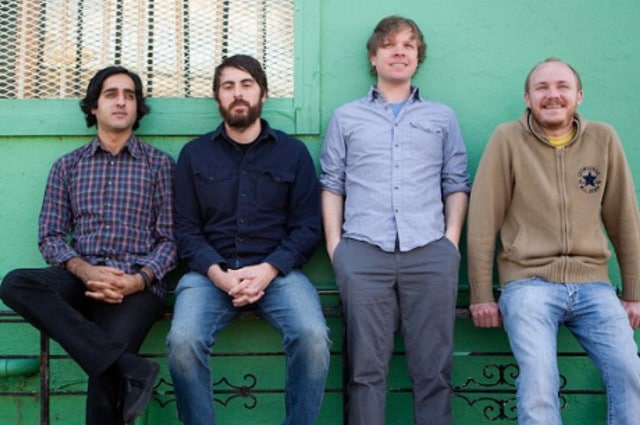 Explosions In The Sky

Guitar centric music has been pretty low on the radar for some years now. Realistically, in the UK at least, the last time acts that built their sound on the once ubiquitous six string dominated the collective consciousness was back in the ’90s. Since the days of grunge, and then Britpop, the old guitar has seen a steady decline as the instrument and ‘sound’ of choice. Where it has held a modest, yet nonetheless significant stronghold is in the post-rock output of bands like Explosions In The Sky, and their contemporaries like Mogwai and Godspeed You! Black Emperor. Watching Explosions In The Sky at Brixton Academy on a damp October evening is a wonderful reminder of why guitar based music can still be a stirring and vital experience.

The Texans have become well known for their searing live performances, and they waste no time validating that reputation tonight. They launch headlong into the opening track of this year’s The Wilderness with a commitment that sucks you into their narrative without any chance of resistance. It’s a brief, yet grandiose exposition shot that hints, without spoilers, at what the night will entail. Which is to say that unlike a lot of current music that deals in specifics, details with a macro-focus Explosions In The Sky concern themselves with more abstract large scale notions. A case in point is the epic, both in length and scope, With Tired Eyes, Tired Minds, Tired Souls, We Slept, which is played out with a manic ferocity, as is the frenetic build of Catastrophe and the Cure. This isn’t Netflix on your laptop, it’s Terrance Malick in 70mm widescreen.

He is a filmmaker the band seem to share certain a aesthetic with. The pure wide-eyed wonder much of their music evokes is reminiscent of many of Malick’s features. They also hinted at an affinity with the director when they used a voice clip from his WW2 film The Thin Red Line in their track Have You Passed Through This Night from their 2001 record Those Who Tell the Truth Shall Die, Those Who Tell the Truth Shall Live Forever. Logic Dream plays out these tendencies this evening with a vast and dramatic soundscape that collapses into a twinkling reflection.

Visually, the performance doesn’t disappoint either, as every member dedicates themselves wholeheartedly. They take to their instruments with an exuberance that sees the stage come to life with flailing limbs, and the lighting makes their movements and performance even more dramatic. Shards of burnt orange light reach skyward as the tracks build, and at one point rainbow colours spill into the audience – an enchanting and effective spectacle. In thought and application the band work really hard, but also give the sense that they still, after sixteen years since their debut, find joy in what they do. This is also reflected in they career spanning set, which doesn’t rest too heavily on plugging their latest effort. Their music could be seen as incredibly earnest at times, but there’s genuine joy on display.

Longtime fans are treated to favourites like a lush rendition of Your Hand In Mine and a fittingly brutal Greet Death. And that’s where Explosions In the Sky really soar: mixing achingly tender moments with the crashingly heavy ones. Some say ‘they don’t make ‘um like they used to,’ but it turns out guitar music hasn’t had its day at all: it lives and breathes quite happily in this kind of rainbow coloured post-rock that’s fit for any big screen.

Explosions In The Sky MP3s or CDs

Explosions In The Sky on Spotify