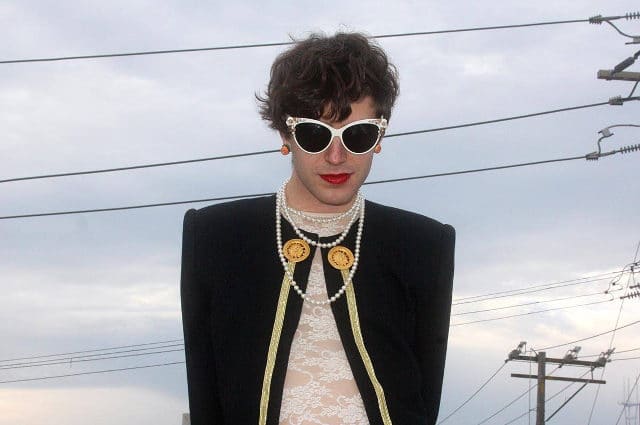 It’s October 31st. London’s Roundhouse is packed, and aside from the odd witches’ hat and hockey mask, most have opted to come as themselves. Ezra Furman would no doubt approve, having suggested in the run up to the show that, although costumes were encouraged, this had always been a stressful time (“I feel weird about costumes. I hate being pressured to present myself in a certain way.”), and having said before that “dressing as I please has signalled the end of a lifelong performance of straightforward masculinity”.

Halloween it may be, but there’s clearly no obligation to do anything but celebrate the extraordinary year or so which has brought Furman from selling out the Lexington last May, through the release of the irrepressible Perpetual Motion People, to the 2000-capacity Roundhouse tonight.

First, Charlotte Church and assorted hooded henchpersons bring us Late Night Pop Dungeon, the hit of festival season. It’s a headlong mashed-up trolley-dash, with a cheerfully callous disregard for notions of genre. A snippet of I Monster‘s Daydream In Blue is spun, via Tchaikovsky, into Nine Inch Nails‘ Closer; Jefferson Airplane‘s White Rabbit becomes Sugababes‘ Overload and there’s a superb run through SFA‘s Hometown Unicorn. Church is a versatile, charismatic presence, and the band are excellent. (In particular, backing singer Marie Batchelder threatens to steal the whole shebang with a staggering take on Amerie‘s One Thing.) By the time En Vogue‘s Don’t Let Go threatens to morph into 21st Century Schizoid Man, it’s become the X Factor live show from hell. Tonight of all nights, this is, of course, A Plus.

It’s an absolute joy, which doesn’t let up once the Boy-Friends make their appearance, playing pallbearers with a large pink coffin. Set centre stage, there’s a brief moment of Spinal Tap-inspired panic before the lid is thrown open to reveal Furman, who slinks out in a black dress and straight into the huskily gospel-inflected R’n’B of Big Maybelle‘s Ocean Of Tears. If it sometimes seems like there are multiple Ezras – the ragged, emotional, still enthralling headline set at this year’s End of the Road festival being a case in point – tonight Furman is passionate and assured, with a rollicking Anything Can Happen and a raw, raucous Tip Of A Match being early, spirited highlights. Delivered tonight as a “protest song”, Day Of The Dog remains among the very best Furman songs, at once minatory and triumphant (“…and you can go home tonight/and you can think that you’ve won/but I’ll see you again/and I’ll prove you dead wrong”).

Throughout, the band feed off Ezra’s positive energies, seemingly able to switch in a moment between being Boy-Friends, Bad Seeds or Attractions, with saxophonist Tim Sandusky peering out from under his bordering-on-comically-oversized topper to add sharp, sparky flurries and skronking solos, and Jorgen Jorgenson providing propulsive, James Jamerson-esque bass. After the downbeat-doo-wop “Ditty bop sha lang lang”s of Ordinary Life, there’s a short solo interlude, with Furman musing on the Roundhouse’s origins: “I hear this was a hospital for trains?” (adding that perhaps “we’re all sick trains who’ve come to get well”).

From here it’s a jubilant rush to the finish. A dizzying Reckless Year, Body Was Made and a declamatory, self-explanatory Tell ‘Em All To Go To Hell would have been enough, but there’s room even on a Monday for the defiant (“they don’t allow no crying/In the cold straight world of men”) Teddy I’m Ready (like most of August’s six-song offcuts collection, Big Fugitive Life, it was far too good to waste) and I Want To Destroy Myself. Just another night with Ezra Furman and the Boy-Friends, then; a Halloween party for the Halloween-indifferent.

To finish, another cover: typically, a euphoric canter through Higher And Higher. Tonight, though, Ezra has other ideas, and it’s Where Eagles Dare by none-more-black ur-horror-punks The Misfits. It’s a great choice, given the date, however you want to dress it.