by Rob Mesure
published: 26 May 2015 in Live Music Reviews
Tweet 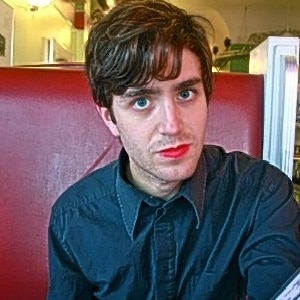 The year is 2007. An unassuming, slightly awkward young man is perched on the edge of a bed with an acoustic guitar: “Kirsten Dunst,” he announces to the eponymous object of his serenade; “I’ve loved you since I saw Spider-Man 1”.

Swipe forward to 2015: over an insistent pattern of drum and tambourine, his band have taken the stage, one Boyfriend at a time and that same man has a capacity crowd hanging on every word of Day Of The Dog, the title track of his fabulous, fluorescent 2013 album and tonight’s opener. A picture in pinky blue shirt, plastic sunglasses and pearls, Ezra is fresh from a session for BBC 6 Music and a spot on Later… with Jools Holland, between such likely bedfellows as Simply Red and Skepta, his first TV appearance barring a station in his hometown of Chicago – and a big one. Not that he’s let it go to his head, of course; a recurring theme throughout 90 incandescent minutes is just how grateful he and the band are to be here.

“This is not a failure-proof environment, so please hold on with me” says Ezra, after his guitar lead comes a cropper following stunt stage manoeuvres two songs in. It’s testament to the hold he has over us that there is near silence while the crowd waits for him to untangle a spare lead on loan from a member of Du Blonde, Beth Jeans Houghton’s new outfit, supporting tonight. Cable duly uncoiled, next up – somewhat ironically – is Lousy Connection, the irresistible lead-off track from the upcoming Perpetual Motion People. Between doo-wop backing vocals and American Graffiti soundtrack saxophone, it perfects the trick Ezra employs elsewhere of classicism without clichés, far too sincere to be mere throwback or novelty.

After the garage-rock howl of Walk On In Darkness and the pitch-black biblical allusions of American Soil, Ezra turns to his band and suggests they do “the b-side”. We’re in no doubt as to which, and Caroline Jones, from the reverse of My Zero, inspires unison whistling from the audience. This is fairly swiftly followed by Restless Year, the first single proper from the new LP, a punkier, darker (“Death is my former employer!”) take on some of the same rhythms last used by Vampire Weekend.

From here on, the energy levels never dip and the highlights are many. Mysterious Power is “about listening to music and feeling mysterious” and is dedicated to Ronnie Spector, although it could easily be to the late Clarence Clemons, so much has Tim Sandusky’s E Street Band saxophone part transformed the song from its origins in Ezra’s work with his former band the Harpoons; My Zero teases unabashedly joyful choruses from the rapt congregation and I Wanna Destroy Myself is given an autobiographical spoken introduction that ratchets up the tension, Sandusky at one point playing the part of Furman’s psychiatrist (“Do you relate to the monkey in the zoo, or the monkey that’s free?”); when the band tears into the song proper, the mosh-pit that has been threatening to form all evening breaks out of its cage.

Finally, we’re sent out into the night with an encore: Jackie Wilson’s appropriately euphoric Higher And Higher, complete with trick ending; the Boyfriends are almost offstage when Furman returns, tells us that they really must go, then drops his hand and his well-drilled band pick up on the offbeat; a superb finale to a rather special show.

Meanwhile, back in 2007, Ezra pleads with the object of his affections, singing: “Kirsten Dunst, Kirsten Dunst, why don’t you date someone who’s not famous for once?”; on the strength of tonight’s performance, she should act quickly.