Ezra Furman: That’s When It Hit Me @ Barbican, London 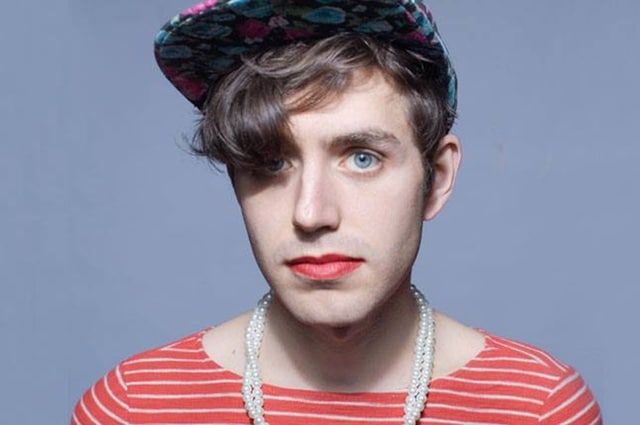 Performing at the Barbican to celebrate 20 years of Simon Raymonde’s Bella Union label, to which he is signed, Ezra Furman seems overwhelmed to be alone on the illustrious venue’s stage. His hero Leonard Cohen, whose song So Long Marianne he covers with Du Blonde, played here with Philip Glass in 2007. He references feeling out of place throughout the evening in songs, poetry, chat – and even with a slightly dubious Liverpudlian accented imitation of the famous John Lennon quip for the people in the posh seats to rattle their jewellery.

A ramshackle announcement introduces Furman to the stage. There is an air of anticipation, that anything can happen. Opening with solo performances of older songs Cherry Lane, The Worm In The Apple, Penetrate and Queen Of Hearts, Furman soon finds his voice. And having warmed up, he starts to have a little fun, pulling out a stripped back version of Restless Year, his love of the Velvet Underground clearly on show. It could so easily have lead into a cover of Rock & Roll.

New song Amateur gets an airing, and sees him sing of shaking off learned conventions in order to be completely free. “If you can forget your vocabulary you’ve got wings to fly, there’s no sense in keeping them folded neatly, take to the sky,” go the lyrics, and he’s living these words. He puts down his guitar and slowly strides across stage to a single drum, purposefully mis-hitting as he sings Hark! To The Music, underlining the same point.

Having hit his stride, he proceeds to revel in being able to do whatever he likes. Without the bombast of his regular band The Boyfriends, the songs reflect their genesis, in particular of Furman’s strong connection to poetry. Preparing for each one, he hums and haws, giggling at thoughts and memories that run through his head. He jokes of an alter ego releasing an album made up of these noises.

During the rest of the show Furman is joined at points by Ben Joseph from The Boyfriends and new project Secret Bad Boy, on the grand piano; Du Blonde on guitar and vocals; and a string quartet lead and arranged by Fiona Brice. There is an interlude with poem The Mail Order, which highlights Furman’s wry humour amid his usual fare of despair and rebellion. Bad Man, a song well able to stop a listener in their tracks on first hearing, has the same devastating effect this evening; this is a Barbara Streisand-esque showtune, albeit with added piss and vomit.

Written for her grandfather after his death, Du Blonde introduces Isn’t It Wild, any sadness soon chased away as she struggles to get the distortion right, and is left with something a bit metal. “This one’s for you Grandad,” she says with a wink. All sorted, they start, and the duet proves to be one of the highlights of the show, their voices perfect foils each for the other.

The introduction to Refugee, Furman’s song about how he imagines his grandfather’s escape from the Nazi occupation of Poland, playfully digresses into whether we’d all be here watching Adele instead of him, if his grandfather hadn’t made it to America, and as if she wouldn’t be mainstream successful in every alternative timeline. It’s a moment of levity before a stark reminder of what’s at stake in the current climate, and one that represents Furman at his most natural and confident. His songs are his home. It’s a joy to see, and to coin a phrase, That’s When It Hit Me – Ezra Furman can do anything. Other than a Liverpudlian accent.