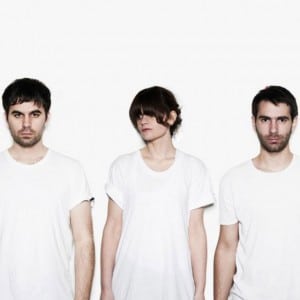 The last 30 or so minutes of Factory Floor‘s set at Heaven is brutal. Prior to that, we get something a little different to what we’ve seen from them before. It is perhaps more to do with familiarity than anything else, but there was something that seemed less organic about the set early on.

The trio are supported tonight by the whirling limbs and snappy dress sense of William Doyle as East India Youth, whose electronic soundscapes, all morphing, looping and refracting, makes him the headliners’ perfect opener. The two sets follow a pattern; slow to get going and winding up in something approaching frenzy. Doyle’s debut album Total Strife Forever is set for release in January, and the set represents it well, taking in his vocal-based songs and the more successful techno side and mixing them together to make quite the party for one. Switching repeatedly between guitar, laptop, microphone and electronic gizmos, he gives the impression of being a man of many ideas. At this stage they manifest in many forms, some fully formed, some still germinating. But when closer Hinterland gets up to speed, everything comes together.

Previous Factory Floor shows often felt like neither the audience nor the band were quite aware of exactly where it would go next. This was more recognisably a set made up of songs, complete with plenty more moments when a fragment would bubble to the surface and pop recognisably, be it the synth line that introduces How Do You Say, sparking and nagging and needling away, or the snippets of Nik Colk Void’s emotionless voice intoning during two Different Ways.

Not that it isn’t good. The songs Factory Floor do have are mostly excellent. It’s just odd to hear them do a set which doesn’t appear to have been mostly improvised. The set is a little slow to get going, too; the initial phase is lacking a little in crispness. Things work best when Factory Floor’s surfaces have the kind of stark metallic cleanliness that would make a Danish reductivist mortician feel at home.

But they do get there. Once they do, the foot is not lifted from your throat. It is (seemingly) endless barrage, a hypnotic rush of minimal techno. On stage, they’re mostly expressionless. Dominic Butler, seemingly engaged in rewiring instruments as he goes, Gabe Gurnsey playing merry hell with all manner of percussion and Void capturing, then distorting her vocal. There’s quite the parallel between the visual of her action and what is heard – into the microphone she sings, then she twists at knobs and the captured sample screams and refracts.

Then there’s that last half hour. Each time you think it’s done, each time you think you’re being spared, they pull you back down into it. Pounding, obliterating, firing pulse after pulse at you until you can’t take any more, and your submission is all but guaranteed. On this evidence, sometimes punishing is exactly what you need.