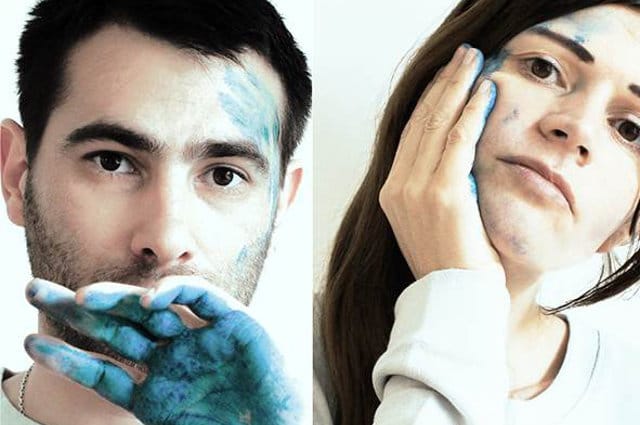 Given their latest album, the excellent 25 25, has seen the band embrace a sound which is more machine than human, it wouldn’t have been a surprise to see Factory Floor colleagues Nik Colk Void and Gabe Gurnsey poised between two banks of electronic equipment, doing nothing more strenuous than plugging, replugging and the occasional hard push of a button.

But no. There’s a full drum kit on stage, which Gurnsey places himself behind. You wonder if he had been told that today was going to be the hottest day in the world since records began, he’d have been quite so quick to jump back behind the kit. With hindsight being a wonderful thing, he plants himself behind the drums with perhaps just a hint of a sigh that this will turn out to be more of a workout than he had originally expected.

It is pretty much Bikram drumming. Because it is hot in here. Like swelteringly, stiflingly, fiery furnaces of hell hot. Which given Factory Floor are all about motion and movement, makes it far from ideal conditions to watch.

While it’s a surprise to see the return of the drums, it’s not an unhappy one, and there is definitely something impressive about seeing Gurnsey accurately reproduce the relentless, machined rhythmical punch of 25 25 so precisely.

He becomes the trigger. Dial Me In’s frenetic cymbal workout, moving purposefully into those New Order-like breaks, becomes the central plank around which the writhing synth line wraps itself. “Sad face,” Void intones, voice vocoded and distorted. “Awkward,” she adds, as if she’s reading out one side of a WhatsApp conversation about a traumatic first date.

In keeping with the aesthetic of 25 25 the performance is stripped back. There’s no visuals to speak of. There’s no chat. Just the same dedication to the beat and the pulse which the album revels in. So Dial Me In segues into the squelching 25 25 with barely a breath taken. It then heads full pelt into Ya, which takes yet another simple jabbing electronic note and then prods you in the ribs with it with such intent that there’s nothing left to do except hand over your inhibitions and agree that yes, this is a marvellous thing.

Factory Floor talked about 25 25 being born from a desire to recreate the atmosphere of their live shows, so it’s not a surprise to find that the songs from it works brilliantly in this kind of environment: incessant, single-minded and totally mesmeric. They make the throng dance. They make the throng totally happy. Which is all that Factory Floor are about. Nothing extra, nothing extraneous. Just hot, sweaty, synthy action.