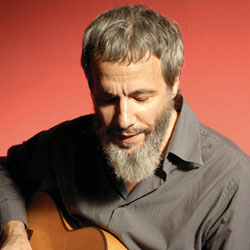 “Don’t ask me to play Father And Son!” said a grinning Yusuf Islam to some ambitious fan’s request, “we haven’t rehearsed it!”

This was the former Cat Stevens’ first festival appearance for 37 years, so he told us. The announcement that Yusuf, promoting a new album in Roadsinger, would play at this year’s Cropredy provoked more than a few raised eyebrows across the media, not least at where on the congested bill he would appear.

He eventually ambled on about halfway through Fairport Convention‘s headlining set on the Saturday night to run through a handful of new songs – all typical of his enduring tranquil simplicity – before playing a couple from his mid-’70s period of mediocrity, and then Peace Train, Richard Thompson and Fairporters in tow.

He was on for barely more than 20 minutes, and steadfastly refused to oblige those after Moonshadow or Wild World. Given the rampant sentimentality that pervades Cropredy every year, this was actually a refreshing dose of rationalism from the great man.

Yusuf’s cameo aside, the theme of this year’s festival was undoubtedly virtuoso guitarists. The unexpected instrumental talents of Steeleye Span‘s Ken Nicol counterbalanced the flippancy of his comedian partner Phil Cool on the opening afternoon, while later that evening Steve Winwood took the stage to deliver one of Cropredy’s great sets. Again, not one to dabble too much in nostalgia, he balanced his time between recent solo work and Traffic classics like Empty Pages and Dear Mr Fantasy, the latter replete with an astoundingly soulful solo. His more challenging work like Light Up Or Leave Me Alone and The Low Spark of High-Heeled Boys went on for a very long time in front of a knowledgeable crowd (his fans, perhaps crossing over from the jazz world, are less the steak-and-ale folkies than the average Cropredy denizens).

The fret-wank was taken up to 11 with John Jorgenson the following day. While the session supremo and former member of The Desert Rose Band did overdo the fancy stuff a little, he did perform a startling version of The Beatles‘ Love To You that began with a lengthy drone that took in several other George Harrison songs. It was impressively creative, more so than the sets of Ade Edmondson and The Bad Shepherds and The Dodge Brothers (Mark Kermode on stand-up bass), both here to push the feel-good factor rather than anything else. The unfortunate Scott Matthews did not go down so well with the Cropredy faithful, possibly because he is too much of the new breed of folk for this one audience that demands its folk traditional – and that it got with Feast of Fiddles, 4 Square and The Churchfitters.

Richard Thompson remains in a sphere above everyone else who played this year, with the exception of Winwood. His solo Saturday night slot saw his usual caustic wit complement the still, over forty years since he joined Fairport, extraordinary imagination he shows with a guitar in his hand. Particular highlights included Down Where The Drunkards Roll, I Want To See The Bright Lights Tonight and Persuasion, performed with daughter Kami.

Thompson hung around for most of Fairport Convention’s headlining set on Saturday. More so than in recent years, they ventured into the less-visited corners of their enormous back catalogue, including three songs from iffy 1971 concept album Babbacombe Lee. That said, Reynardine, Who Knows Where The Time Goes?, Matty Groves and inevitably Meet On The Ledge sent fans back to their default setting of gushing emotiveness. Thirty years after the first concert here, their own Peace Train chugs on.