by Rob Mesure
published: 1 May 2016 in Live Music Reviews
Tweet 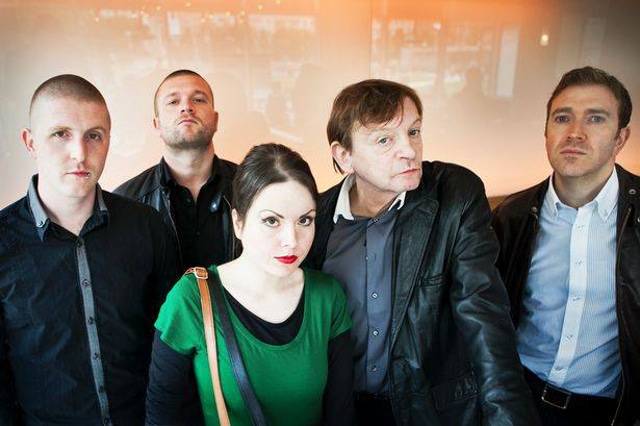 It’s 22.15 on Wednesday night, the third of The Fall‘s four-night occupation of The Garage, and Mark E Smith and co are running late – the capacity crowd grows increasingly prickly as every minute of the ominous electronic thud of the intro tape goes by.

A couple of hours before that, though, there’s East London five-piece Arrows Of Love, who attack their opening slot like they’ve got something to prove. By their second song – So Very Predictable – boiler-suited singer and guitarist Nima Teranchi is bent double, face and microphone hidden behind a mop of hair, his voice pitched hard against the bluesy, grease-stained grind. The loping prowl of Pretend Friends follows, with lead guitarist Pip hacking shapes out of the air.

The band are recent recipients of a PRS Momentum award, funding the cost of second album PRODUCT, whose lead single Toad is next. They’ve worked on the album with Bad Seeds/Grinderman alumnus Jim Sclavunos, along with Shellac bassist Bob Weston, and it’s easy to hear why. It’s full of the jet-black, deviant creep of The Jesus Lizard, with almost Fugazi-taut post-hardcore verses and a tandem vocal by blue-haired bassist and vocalist Nuha Ruby Ra on the chorus (“I see the toad’s up to no good”) recalling the glorious, razor-toothed proto-riot grrrl howl of Silverfish.

A doomy, half-spoken piece from the new album and the scathing Prescriptions follow, before the band leave the stage after a tense, pummelling final song that sees Ra take a violin bow to her bass. They’re vocal about being honoured to be invited onto this bill, but on the strength of this wonderfully scuzzy noise, they’ll soon be nobody’s opening act.

Then there’s Vladimir, tonight’s second support. There are just two things you need to know about Vladimir:

1. Their name should provide many minutes of headline-writing joy (Vladimir Are ‘Putin’ On A Show, anyone?)

2. During their set they cover Underworld‘s almost-certainly-now-described-as-iconic Born Slippy, its synth chords and Karl Hyde’s echoing vocals replaced by guitar drone and Gallagherian snarl. If this sounds like a terrible idea, it’s far worse in practice.

Although bongo-playing grannies are still conspicuous by their absence, much has been said about the numerous musicians that have done time in The Fall, and how the current incumbents are now the longest-serving. Tonight, they sound well-drilled, and rattle through the opening Venice With The Girls – from last year’s Sub-Lingual Tablet – with the brash, angular assault of the band’s earliest incarnations.

Not that Mark E Smith would be interested in mere nostalgic retreading, of course. It’s the 35th anniversary of the release of 1981’s cut-price classic Slates (its cover stating “cost: two pounds only, u skinny rats”) today but there’s no time to look back: tonight’s set, as usual, focuses mostly on the band’s last decade or so.

During Bury Parts 1-3, from 2010’s Your Future Our Clutter, Smith starts his customary tinkering, turning up guitarist Peter Greenway and Dave Spurr’s thundering bass, and singling out Elena Poulou’s keyboards for particular attention – despite her protests. She’s skipped a few dates recently, for reasons unclear, and there’s a bit of unease at this moment. But what tension there might be feeds straight back through the music to the crowd, who throw their backs into the rumbling Dedication Not Medication and the explosive, rockabilly chaos of First One Today.

After a dip into the band’s imperial ’80s phase for Tuff Life Boogie, Spurr and drummer Keiron Melling set off the motorik groove – part NEU!, part Radar Love – of Auto Chip 2014-2016, extended here to just shy of twenty minutes. They may have told us “we dig repetition” nearly four decades ago, but they go above and beyond here. Greenway’s needling five-note lead line is a constant presence while, stage left, Smith swaps roles with Poulou about halfway through, playing a few notes on her synth as she shouts the refrain (“Suffering away-ay-ay-ay!”). A glance at a few recent set lists suggests that a few songs were cut to allow for this marathon take, and its long running time doesn’t make it any less thrilling, seemingly constantly on the verge of falling apart, constantly asking us – as the band seem to – how much longer they can keep going.

Having left the stage, with some shouting for further selections from the classic catalogue for the encore, Smith returns to answer the question. After mumbling a few non-sequiturs (“Residency… Res… The man can’t even fucking pronounce residency… Billy Bragg’s producer… Grant Showbiz…”) he yelps “Hey! Mis-ter Pharmacist!”, leading the band into a superb, acid-drenched rendition of the perennial favourite, tracing a line from the 1966 original (by L.A. garage-rockers The Other Half) through 1986’s Bend Sinister to this sweaty, satiated club in 2016. How’s that for nostalgia?