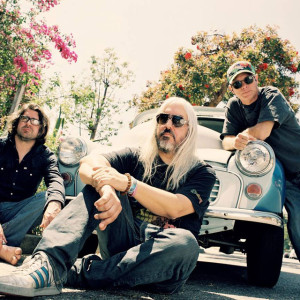 And so the end is near, but the final curtain is not quite ready to be faced just yet. That will happen for the second of these ATP End Of An Era festivals when Loop, Slint and Mogwai hammer the nails into the coffin and send a large velvet drape swooshing across the stage – at least in the UK.

The last time we saw Scout Niblett at ATP she was decked out in the height of Hi-Vis fashion. This time around she’s less health and safety conscious but still brilliantly arresting. Her songs might not be the most in your face, but her vocal range is at times utterly compelling. Meanwhile, Magick Markers are blitzing the second stage and kicking the festival into life with a sonic blitzkrieg. Why play a guitar when you can throw it over your head and ride on a wall of insane feedback? When it sounds this fantastic, why indeed?

The loud vs quiet face off is something that defines the majority of Friday’s running order. If the sweeping elegance of múm does nothing for you (although that should be impossible; they seem remarkably animated and excitable for the majority of their set), then there’s always The Icarus Line to keep things red-lined and combative.

Lee Ranaldo And The Dust are, against all odds, a reasonably straight up rock band. With his Sonic Youth background, it wouldn’t have been unreasonable to expect something a little more challenging, but there are no complaints with his set; it’s loud and perfectly formed. Low should be one of the highlights of the weekend but their phenomenally delicate songs are all too often battered into submission by the chatter of a crowd who bizarrely seem to be disinterested. When it is possible to hear them, they are stunning, but they deserved better than this.

Saturday’s line up is jam packed with highlights and offers little opportunity to eat anything at all. Starting with Tortoise’s startlingly aggressive jazz meanderings (and meanderings can be good) it’s a pretty full-on day from start to finish. As unlikely as it seems, it is Har Mar Superstar’s set that sets the bar high for the weekend. Occasionally he’s derided as a bit of a comedy turn, but Mr Superstar deserves a little more kudos than he’s afforded in some quarters. Once you get past the image a large, sweaty, Ron Jeremy lookalike cutting ludicrous shapes and pay attention to the details, it’s clear that this is not parody or a comedy act but someone who pays homage and adds to the soul and funk genre. He’s a frenzy of energy, great tunes, killer banter and magnetic stage presence. If ATP needed someone to get the party started, then Har Mar Superstar more than stepped up.

Choosing between Television and Wolf Eyes is a real quandary, but once Television launch into their Marquee Moon set (albeit played out of order) it is hard, if not impossible, to leave. There has been a little consternation regarding their gigs leading up to tonight, but they totally nail it here. As might be expected, it is Marquee Moon that expands into a genuinely moving experience, played almost perfectly; it is a truly wonderful. Godspeed You! Black Emperor’s set is similarly jaw dropping, the material from Don’t Bend… forming a brutal and unrelenting wave of noise. Completing a triumphant evening on the main stage is Dinosaur Jr (pictured), long time stalwarts of ATP. As usual they’re on blistering form with a fantastic set list covering just about every corner of their career. As might be expected, Freak Scene sends the pit wild, whilst J Mascis pummels them with his colossal guitar noise, looking as relaxed and nonchalant as ever.

Sunday’s line up is perhaps not as inspired as Saturday’s, which might explain why at times the site seems a little like a ghost town. There are still plenty of fine moments to be found however. Adam Gnade’s set with Youthmovies is a particular highlight coming across like Jim Carroll fronting Meanwhile Back In Communist Russia. Post-rock poetry might not be everyone’s idea of a good time, but it’s done with such conviction that it’s impossible not to be drawn in. Pharmakon are equally spell binding but in a much more terrifying way. However, if anyone understands terror, it’s The Haxan Cloak, with his nightmarish set of almost unbearablly bass-heavy electronic soundscapes – the sound of passing on into the blackness of the end. But with more smoke, obviously.

And so, the ATP festivals as we knew them take one step towards the abyss. It will be sorely missed. Not just for the bands, but the little things that made it such a great weekend and a sanctuary from the mundane. It’s s fond farewell to the pub quiz, the karaoke, the chance to see the bands doing everyday things (J Mascis buying crisps, Kristin Hersh settling down at Burger King, Albini’s poker nights, Har Mar Superstar giving massages or Kelley Deal’s knitting circles), and playing 2p machines relentlessly in between acts. Here’s hoping they find a way to resurrect the festival in the future, for surely some will be lost without it.