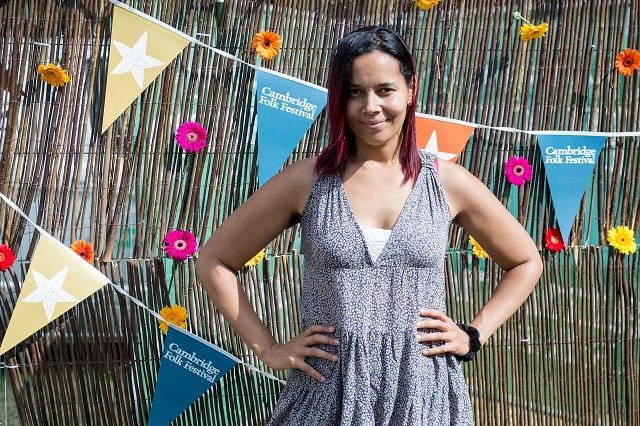 Now in its 53rd year, Cambridge Folk Festival is undoubtedly one of the world’s most celebrated festivals. From humble beginnings back in 1965 it now attracts over 10,000 people every year. While it may have no problem attracting a loyal audience – many of whom will boast of having been coming for decades – and being able to book folk royalty into headline slots, it has had problems of a different sort.

Cambridge has, for years, been one of the least diverse festivals around – in terms of audience and artists – with its focus traditionally being overwhelmingly on white men of a certain age. This year, however, organisers put a huge emphasis on female artists, with Peggy Seeger, Eliza Carthy, Kate Rusby, The Shee, First Aid Kit and All Our Exes Live In Texas all in prominent slots. 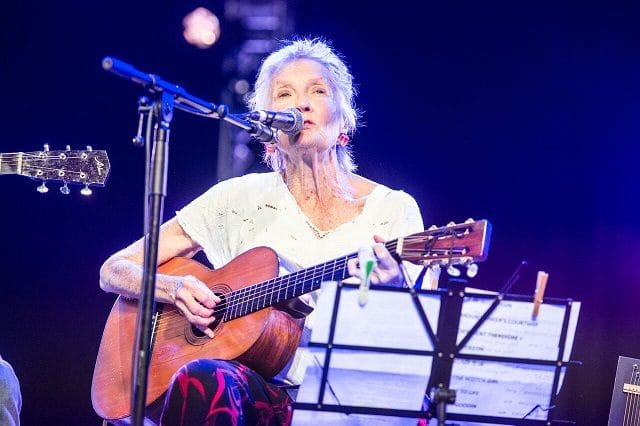 They also played a master stroke in asking Rhiannon Giddens – a festival favourite – to curate some of the line-up. She responded by bringing a selection of the finest black, female folk, country and soul voices, which brought fresh perspective, energy and life to the festival, shaking it to its core.

These acts included Amythyst Kiah – whose mix of old time music, country and blues is woven together with jaw dropping voice and a natural gift for story telling. She covers Vera Hall’s Trouble So Hard (best known as the sample used in Moby’s Natural Blues) to huge applause. But it’s her own music that really captivates her audience, and from the moment she first opens her mouth, with: “Woke up this morning feeling bad, worst hangover I’ve ever had…” you know you’re in for a helluva ride.

Birds of Chicago are also endorsed by Giddens. The husband and wife team – Allison Russell and JT Nero – have been described as ‘secular gospel’ and it’s an understandable if lazy term. Joyful, soulful, they leave a roasting hot Stage 2 infectiously beaming, following a singalong with Darlingside to close their set “This is a real folk song – we sing the chorus 63 times.” 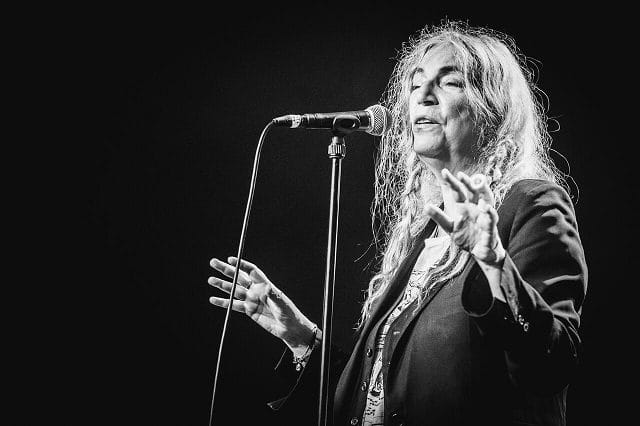 Elsewhere, women continued to provide the highlights. Patti Smith‘s set was a triumph. At first it looked like things were going sour quickly, as she demanded the smoke machine be turned off “I’m not Metallica!” and that someone in the front row stop filming “I thought I saw Bertolucci but it was someone else” – but after that she was all smiles, taking obvious delight at headlining a folk festival despite, she admits ‘folk not being our forte’. As a nod to her surrounds, she delivered a stunning version of Bob Dylan’s A Hard Rain’s A Gonna Fall. She takes a break while her band play a rousing take on The Jim Carroll Band’s All My Friends Are Dead…and she even performs a hymn, We Three Kings. But the stand outs are an emotional version of Because The Night and a raucous Gloria. Her set skipped between the genres of popular music – again, a smart move to expand the boundaries of this thing we call ‘folk’.

Stick In The Wheel merge a background in electronic dance music with traditional sounds and themes, with tales of witches bottles and ‘naughty sailors’ – and even their version of The Abbots Bromley Horn dance – reportedly the oldest dance song. They’re atmospheric and challenging – and rather at odds with singer Nicola Kearey’s easy stage chatter.

John Prine‘s Sunday evening set was an absolute joy – his gravely voice dishing up songs that ooze with character, humour and heart. The 71-year-old’s most recent music, from The Tree Of Forgiveness, released earlier this year, is as raucous and on form as classics from his back catalogue. Songhoy Blues brought their Malian rock to Saturday night, while St Paul and The Broken Bones had the enviable late night slot on Friday – when the day trippers have left, the more boisterous music begins, and their booming R&B with lashings of brass more than did the trick. 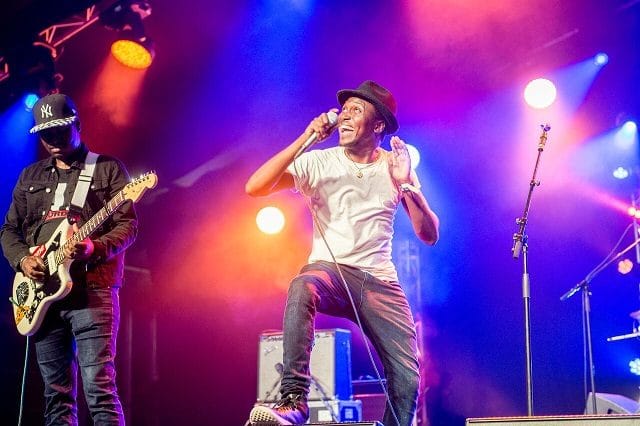 But the last set at the Club tent on Sunday night was undoubtedly the highlight of the festival, bringing together all of Giddens’ apprentices – also including Yola Carter and Kaia Kater – for a session of original songs and covers of the likes of Joplin, Gillian Welch, Dolly Parton and Mavis Staples. Giddens is clearly delighted at the spectacle of thousands of people crammed in, shunning the stomping finale of the Peatbog Fairies on the main stage. Perhaps the most poignant moment came as she laughed into the crowd: “It’s beautiful to see so many of you singing along to ‘Black Myself’.

Giddens’ influence was keenly felt, and embraced, throughout the festival. Her acts were positive, uplifting, challenging and thoughtful, proving it’s possible to progress even an institution like Cambridge, opening it up to new audiences, without losing people along the way.