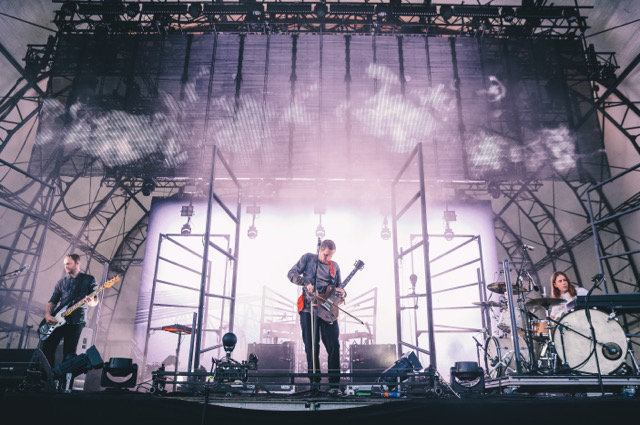 Some tweaks and tucks to the site used for Lovebox over the previous two days and Citadel’s second edition is ready to go. The former VIP area is opened up for a gastropub feast, Sunday Papers debates, a fire juggler in a cage, art classes, and what looks like a wedding tent in which to shelter from the scorching heat. Elsewhere a comedy tent spills out beyond capacity, stalls sell makeovers, braids and hats. There’s no lake on site, but it’s otherwise as if Latitude’s uniquely positioned music-and-the-kitchen-sink success up the road in Southwold this weekend has at last been noticed by a London promoter willing to steal at least a portion of their market.

The crowd seems to be at least as big as that of the preceding day, and the snaking queue for the site’s only ale bar is commensurately absurd and maddening. Punters had arrived early with good reason; Norway’s Susanne Sundfør takes to the main stage looking suitably summery in shades and a flowing white dress and alternates between synth, mic and, for new song Redemption, acoustic guitar. Material from 2015’s glorious Ten Love Songs has to contend with inexplicable static parpings from the speakers, but the crowd gradually builds during a set that sees her appear comfortable with being the centre of attention and freely interacting with her audience’s enjoyment of her dramatic, resonant electropop. Fade Away provides one of several moments where thoughts of Abba spring to mind.

At the opposite end of the field, the current iteration of Tinariwen blow in all the way from the Sahara for a far-too-short half hour set in the Big Top in front of a surprisingly numerous crowd. Dressed as ever in their desert best, the four Tuareg make for a stately if a largely static presence until the very end when one of their number starts wildly dancing as if possessed, instantly setting the place alight. His headdress comes undone and flaps about with as much abandon as his limbs. All too soon it’s over. But not before reminding that music, whatever language its lyrics are penned in, can be communal, emotional and intense, often all at once.

Cat’s Eyes, unfairly labelled a side project of The Horrors, is the vehicle for that band’s front man Faris Badwan and soprano-composer Rachel Zeffira. In the scorching mid-afternoon sunshine of the main stage they represent quite the opposite of The Horrors’ black-clad remit of psychedelia, playing instead in shimmery gold sequins to a small but appreciative crowd. Badwan seems comfortable cracking jokes at the audience these days too. The same stage later hosts grizzled veterans Calexico, whose Tex-Mex melange of straightforward melodious rock and mariachi-laced horns place them in a category quite of their own. Seasoned and likeable professionals of decades’ standing, they’ve always inhabited a space somewhere to the left of mainstream guitar music. Their musicality, fusing Mexican traditions with singer-songwriter guitar-led acoustica, remains a winning one with a festival crowd, with plenty of call-and-response moments – especially on the always enjoyable Guero Canelo – to serve alongside some sassy shimmying from their loose-hipped audience.

Back at the Big Top and Battles’ intense, drummer-led barrage bludgeons a delighted crowd with a set which makes up for in musical talent what it lacks in temporal variety. It’s meaty, violent even – words not often associated with an instrumental outfit – and, as one of many bands playing today who are decidedly between albums, it treads heavily on past glories. Another band between albums, Caribou seem even to be wearing the same clothes they sported for their slot on Latitude’s stage in 2015, and play many of the same songs to a considerable crowd. Dan Snaith, in the Fabric tent the day before in his Daphni guise, leads through choice moments from their four-album career, majoring on Swim and Andorra. They close on Sun, with the weather beautifully backdropping their best-known track.

Fabric’s tent, belting out organ-wobbling bass all weekend, continues in the same vein with the sagely bearded Andrew Weatherall unleashing a two-hour set featuring assorted dancers and helpers, while Lianne La Havas tops off a day of under-the-radar acts on the outdoor West Stage. Both sets come to a close just about in time for everyone to head back to the main stage and the undoubted climax of the weekend.

Sigur Rós now number just three, following the departure of Kjartan Sveinsson, yet their sound is no less epic. An elaborate visuals show of lights, screens and images plays out across, over and behind the trio, who just about manage to silence the huge crowd in awe at Jónsi’s legendarily soaraway alien-boy vocals and frenzied guitar bowing, Orri Páll Dýrason’s wild-armed drumming and Georg Hólm’s anchored bass. Ostensibly and initially a brave choice for a headline set, they tentatively open with new single Óveður. But when the Icelanders leave their initial back-of-the-stage huddle and use the space available to them, and the audience begin to recognise songs, they slowly begin to own the evening. Glósóli provides the first lump-in-throat moment, Jónsi’s soaring falsetto recalling the song’s video of children flying off a cliff, the rhythm section all but illustrating the smashing of the Atlantic into the volcanic island from which this extraordinary music hails. Ný Batterí is similarly mesmerising, hymnal, balming and experimental all at once.

Jónsi holds an epically long note during Festival to much cheering and applause, and on Sæglópur optimistic-sounding glocks and piano contrast with gargantuan bowed guitar to memorable effect. They close, as they have for every one of their shows these eyes and ears have witnessed, with Popplagið. It begins slowly, quietly, almost serenely, and builds, and builds, before the instruments drop out, leaving churning drums and cymbals before letting loose a veritable stormhead of the most gorgeous noise ever made by the hand of man and one of the best conclusions to any piece of music. An hour and a half has flown by, over crashing waves, brooding cliffs, and into another place and time, Citadel’s willing audience quite transported.