Festival Review: End Of The Road 2018 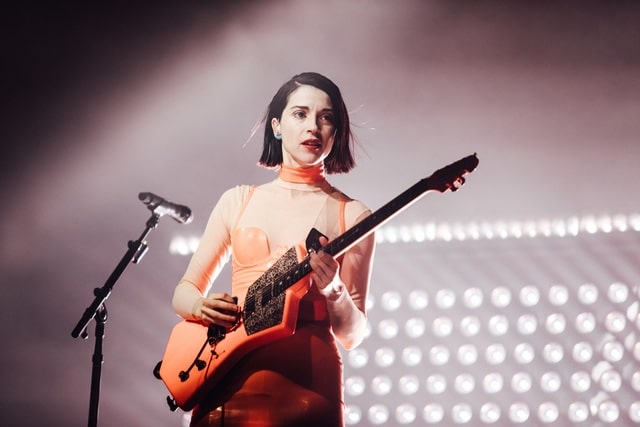 Now in its 13th year, End Of The Road is firmly cemented as a final hoorah in the UK festival calendar. Set amidst the idyllic surroundings of Larmer Tree Gardens where peacocks roam and parakeets swoop, there is a sense of otherworldliness across the entire site. The woods are full of fairy lights, art installations and even a DIY cassette recording studio. There is an art gallery and endless activities for the young and the young at heart alike. In the Outlands there is a cinema, a ferris wheel, fairground stalls, a karaoke booth and of course the disco ship with light up dance floor which fills to bursting as the live music ends and the night owls hoot into the early hours.

The comedy stage boasted an impressive line-up including The Bugle, Alice Fraser, Mark Watson and Bisha K Ali, and crowd favourite the Universilly Challenge quiz, hosted by Bec Hill and Sarah Bennetto, to name but a few. The literary stage in the woodland library played host to Tom Cox, Backlisted Podcast Live and Christina Patterson among others.

But it is the impressive music line up that steals the show. With four advertised stages running from midday to gone 2am the choice is sometimes overwhelming, and the programme includes a foldout clashfinder; much of early Thursday evening is spent poring over this and the detailed band profiles. Play End Of The Road competition winners Suggested Friends open proceedings on the Tipi Stage, bringing their DIY style catchy pop punk to the eager beavers.

Later that evening Kiran Leonard delivered a set of chaotic precision largely drawn from forthcoming album Western Culture. The new material, together with older tracks Secret Police and storming closer Geraldo’s Farm, balanced grace and discord in equal measure – highlighting the continuing development of a unique songwriter and supremely gifted musician. Over on The Woods stage, Yo La Tengo played a diverse set to an adoring crowd, building up from gentle folk and culminating in an almost psychedelic cacophony. 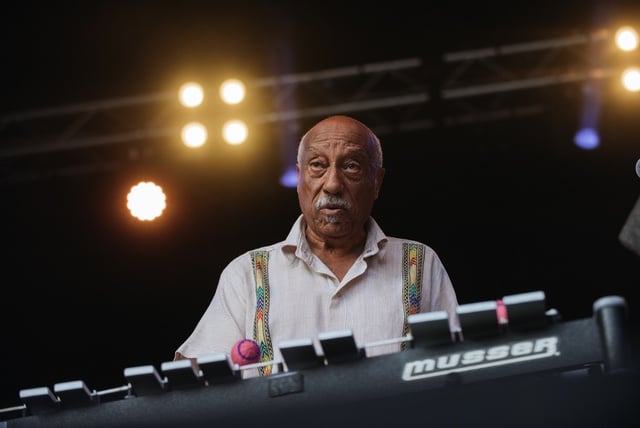 And so Friday dawns with clear blue skies after a freezing cold night and the full festival site is officially opened. Hollie Fullbrook’s Tiny Ruins blend comfortably into their Garden Stage surroundings with wonderfully hazy, blues tinged, and David Lynch-produced songs. On the Woods Stage, three years since she unveiled her debut album as Du Blonde, Beth Jeans Houghton returned with a slightly cautious but ultimately gentle reintroduction of her music’s charisma.

Witty lyricist Lucy Dacus made her first ever UK appearance at 2014’s End Of The Road, and she seemed delighted to be back, playing a selection of songs from both her debut album and 2018’s Historian during a charming and more riff heavy than expected afternoon set on the Woods Stage and again later that evening in a secret Tipi slot, where she was joined by Julien Baker to play Bite The Hand as two thirds of recently formed supergroup, boygenius.

Josh T Pearson seems to be everywhere this weekend. Clearly revelling in the attention, he used his Woods stage appearance to advertise his Midnight Podcast, record signing and secret piano stage sessions the next day. Between all this he manages to showcase his dichotomy as a performer seamlessly switching between getting the crowd a little hot under the collar with dirty jokes and Straight Hits and then breaking their, and seemingly his, heart with deeply personal songs of love and loss. 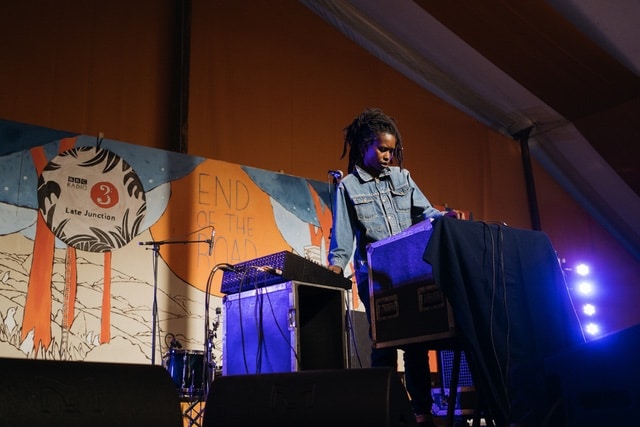 In the Big Top Melbourne’s Amyl And The Sniffers firmly lodge themselves into the consciousness of the largely genteel crowd and lush Dorset setting with a deliciously rude, crude, and raucous set, where frontwoman Amy Taylor encourages the crowd to call one of the security guards a wanker, and later in a late night appearance calls the Tipi Tent audience “fucking poms”. And they love it, as her cheek is more than matched by a brilliant performance that whips both crowds into a dizzy spin. Also in the Tipi Tent Moor Mother offered a breathtaking counterpoint to the predominantly white, and guitar heavy, line-up with her punk, poetry, power electro protest music. She provides an astonishing performance that is at once instinctual and cerebral. What electronic music and often lacks in a live setting she provides in spades through her impassioned execution of music that is avant-garde, disturbing and always intensely moving.

Friday night’s competing headline sets are poles apart. While many were lured by the glamour of St Vincent and her high art melodrama, a hushed but sizeable audience gathered for the lower-key prospect of Jeff Tweedy in a woolly hat with a guitar. Following a rapturously received secret set on the Piano stage earlier in the day, that’s all the Wilco frontman needed to enchant an already reverent crowd – well, that and an increasingly enviable songbook. Tweedy repaid his audience’s loyalty with a career spanning set that included Uncle Tupelo, a host of Wilco favourites, and a couple of newbies. Although the festival offers a lot beyond its Americana, folk and rock roots, as Tweedy sings “if you still love rock and roll” during Misunderstood the crowd join him jubilant fashion.

Saturday doesn’t see a let up in quantity or quality. If you’re at End Of The Road to get your rock hit then who better to oblige than New Jersey trio Screaming Females who mainline the genre’s spirit in rare fashion. A heady mix of Merissa Paternoster’s inimitable voice and guitar work matched with Jarrett Dougherty and Mike Abbate’s rhythm section made for a veritable feast of punk rock and a band largely unparalleled on the live circuit. That’s followed by a quick dash to the more sedate Tipi tent to catch Lail Arad & JF Robitaile’s beguiling double act, who let slip their plans for a Christmas show. 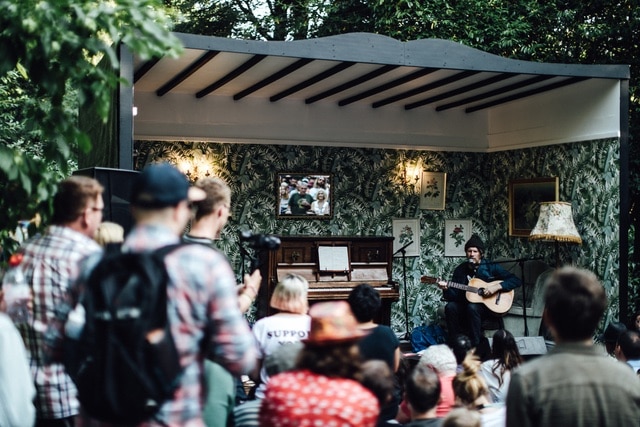 Californian quartet Shannon And The Clams treated the Saturday lunchtime Woods crowd to a glorious slice of doo-wop/garage punk that complements the sunshine blessed festival. The Buddy Holly-esque lovelorn tales and ’60s girl group melodies of their music are shaped into their own image, making them less retro throwbacks than timeless sonic travellers, and one of the festival’s highlights. The Garden became standing room only early in the afternoon for Julien Baker, whose hauntingly melancholic songs about mental health, religion and sexuality occasionally lost their power in the bright sunshine. But the prize for getting a crowd to its feet first on Saturday surely belonged to Omar Souleyman, who brought a taste of the Middle East with big beat, traditional dabke bangers and sent the crowd skyward.

Those looking for some alternative grooves to those provided with a six-string could have done a lot worse than soak up the wonderful sound of Mulatu Astatke and his band. His sublimely presented Ethio-jazz supplied a soothing tonic to the ravages of inadequate airbeds and too much sun and booze, yet also stirred the senses with the beautiful build of tracks like Yèkèrmo Sèw (A Man Of Experience And Wisdom).

But Saturday belonged to headliners Vampire Weekend. Back after four years away with the promise of an imminent new album, Ezra Koenig and his new band members blast through a better than remembered back catalogue. Every song shimmering with afro-pop perfection with hints of Graceland-era Paul Simon. There’s an ad-hoc Q&A with the crowd that culminates during the encore with a very polite stage invasion and wheelchair wheelies during Walcott. This truly was the feel good moment of the festival, not a soul in the crowd is able to resist dancing and the smiles are infectious. 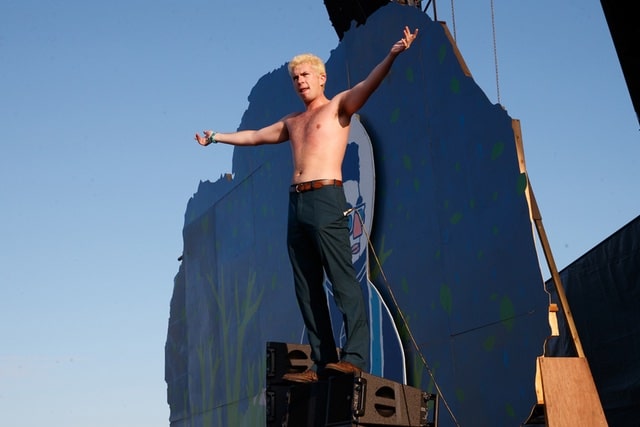 As Sunday raises its sleepy head, there’s no let up in musical possibilities. Haley Heynderickx delighted early risers with songs from I Need to Start to garden where else but on the garden Stage. And it’s fast becoming a rule that if you’re at a festival and Richard Dawson is performing, you don’t miss him. Yet again the psych-folk troubadour proves he is an essential live performer. Seemingly stepping it up a notch with every show, by the time he closes with Ogre he, his band, and the crowd has reached such a joyful pitch it could make your heart burst.

Over on the Piano stage secret sessions, Patrick Stickles of Titus Andronicus rocked up and rocked out with just his guitar, before heading over to the Woods for a more rounded set. Japanese Breakfast collect ever more fans with an enthralling Big Top set combining scuzzy synths, woozy shoegaze and ’80s style basslines, it’s a masterclass in paying homage to musical influences whilst making something unique. Fans are word perfect for breakout hit Boyish.

From there we stumble out into the fading light for the final furlong. Ezra Furman, fresh from interviewing personal hero John Cale over at the hidden Piano stage earlier in the afternoon, powers through their songs of protest and resistance. Furman and their highly talented backing band, The Visions, are unstoppable, exhorting the crowd to rise with them, whipping everyone into a sax strewn frenzy. Intertwined there are moments of quiet contemplation and raw beauty with songs such as Psalm 151. It’s clear this is a band that loves this festival and this festival loves them.

Unsurprisingly the Big Top is rammed for the increasingly popular socially conscious racket of Bristol punks Idles. They don’t disappoint with a set of blazing heaviness and an impassioned message. Markedly, frontman Joe Talbot introduces two of the songs as being about feelings, seemingly sensing an increased urgency to set apart the coarseness of his delivery from the compassion he’s trying to impress. It’s a heartening sight to see a room full of, mainly, younger folk soaking up music that rails against toxic masculinity in the wake of Britpop’s laddish legacy. 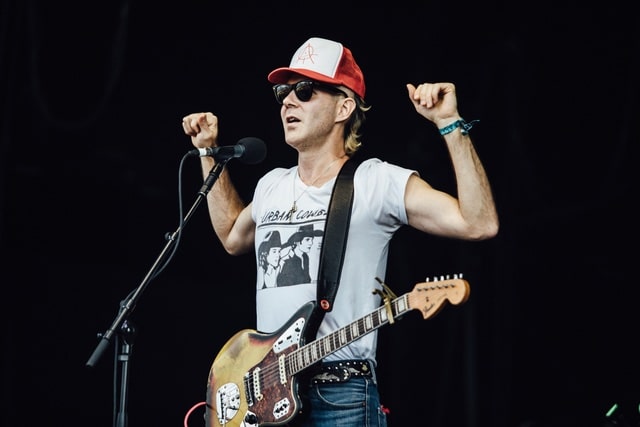 After the frenzy of Idles, Feist is an hypnotic headliner for a Sunday night. Demonstrating extraordinary guitar skills and her beautiful voice, there’s no need for any gimmicks. Despite the large crowd, it still feels incredibly intimate as she sings songs from last year’s album Pleasure as well as the better known hits, although a last minute change of heart means the much loved 1,2,3,4 doesn’t get an airing. It’s refreshing to note that there has been at least one woman on stage for all four headline shows on the Woods stage.

Rather than tail off End Of The Road concludes with a final flourish of secret sets, including Croydon’s elusive Black Midi. These fresh-faced young men evoke the curious mystery of Slint on account of their youth and the startlingly complex racket they make. Equally sprawling and tightly wound, with math-rock agility the band put on a show that will no doubt further fan the flames of anticipation for some recorded material.

There are so many things that make End Of The Road so special, but it’s the amount of fun every single band seems to be having that makes it stand out. That and the festival’s love of a good cover version. Over the course of the weekend on main stages and in secret sessions we hear tributes to Bruce Springsteen, Sandy Alex G, The Smashing Pumpkins, Madonna, Le Tigre, Nina Simone, Velvet Underground, John Cale, Neil Young, George Strait, and Peter Gabriel too.

In fact, our only complaint is that we have to wait another year to do it all again. 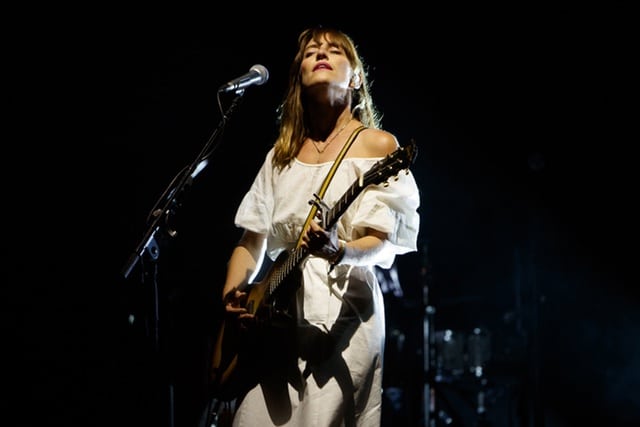