Festival Review: End Of The Road 2015 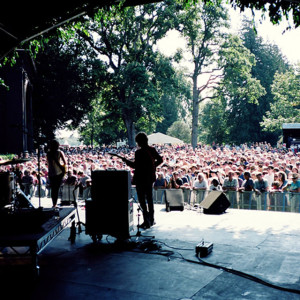 End Of The Road is a fever dream. A happy hallucination. It’s a music festival the way you used to imagine them before you were old enough to go to music festivals. The scruffy/hip bearded/beautiful people plod contentedly from stage to stage. Peacocks appear, at intervals of their own pleasing. Installations and art happenings are there to be stumbled upon in hidden corners. Street food from several continents is freely available. There’s a cheese wagon, a red double-decker offering cream teas, a cider bus, a GIN van.

And it might, initially, be easy to look around, take in all of this, and toss End Of The Road into the basket marked ‘Festivals That Are All About The Vibe, Man’. But that would be a serious injustice. Make no mistake: this is a music festival with the emphasis very much on the music: carefully – painstakingly – curated, with acts matched impeccably not just to the general audience’s proclivities but also even down to the micro-level of which of the stages (four main and a few hidden ‘secret’ locations, tucked away in the wooded areas to the margins of the Larmer Tree Gardens site) they most closely fit with.

So if you like your bands with an edge and some bite, you find yourself gravitating into the blackness of the Big Top tent. Here, we were blown away by Pond, their raucous noise wonderfully inclusive, their ‘show’ its match in energy and thrills. Metz brought similar rackety pleasures, while Nadine Shah’s set was a delight: her no-bullshit humour and political observations between numbers an astringent contrast with her dark, haunted tunes. Du Blonde balanced fragility and anger in much the same way as she does on her current album Welcome Back To Milk; Jane Weaver was spaced out, cosmic and unnervingly aloof; Ultimate Painting were pleasant but perhaps a little fey for their surroundings, their C86 indie rather lost in the darkness. One of the tent’s finest moments came with the love-them-or-despise-them Fat White Family. After their rambunctious performance on Saturday evening, psychobilly served up on a clatter and a wave of sweat, it was into the former camp we went.

For gentler, subtler, less in-your-face but often more left-field delights, the glorious Garden Stage is the one. The most beautiful of the main locations, and scene of much family picnic-blanket-and-weekend-papers action on sunny days (oh HAI, Sunday), here you can often source your laconic Americana, your experimental solo artists and the like. On Saturday the stage was handed over to Heavenly – the imaginative record label currently celebrating its 25 year anniversary – so we were treated to a roster full of delights, from the Pavement-if-they-were-young-again (and from Liverpool) college rock of Hooton Tennis Club to Eaves’ impeccably-delivered torch songs – the disjoint between the unassuming, long-haired, besweatered young man and the crowd-stopping beauty of his voice making for one of the festival’s most dramatic – and wonderful – contrasts.

Heavenly also brought us enjoyably out-there sounds and guitar virtuosity from DRINKS (a collaboration between the imposingly cool Cate Le Bon and White Fence’s Tim Presley), and Stealing Sheep’s fanciful kraut-folk. On Sunday, as the crowds unfurled their limbs under the unexpected bonus of a blazing sun, Amy Boone gave perfect voice (bruised but unbeaten, lived-in, tender and wise) to Willy Vlautin’s ever-compelling tales of life, love and loss as The Delines gave us one of the weekend’s best performances.

The Tipi Tent is the smallest venue, with the feel of a spectacularly-well-curated village fête beer tent. Diagrams charmed the audience with his playful pop, and his set’s Poundshop-Flaming Lips finale with audience participatory balloons and countdowns brought smiles and frivolity to proceedings.

The Woods Stage is the main ‘arena’ (although this is emphatically NOT an ‘arena’ kind of a festival), and notable both for its convenient gentle downward slope and its impressive sound, a combination which means that wherever you choose to take up position, you are sure to have a reasonable chance of both seeing and hearing the act properly.

Sunny Sunday brought excellent daytime performances from Hinds – breathless, having travelled through the night to make the show on time (cheers, Easyjet) – and a superlative Alvvays. Tame Impala’s Friday night headline set was merely alright when it ought to have been wonderful, while, conversely, The War On Drugs topped off proceedings on Sunday night by pulling out all the stops, their subtleties coming across magnificently on the large stage and finally making sense (to me).

But hanging, like a wonderful alluring cloud, over the first half of the weekend, was always going to be the draw and pull, the anticipation and expectation, of Saturday’s headline slot. Sufjan Stevens, fresh from a tour which reportedly had the power to reduce swathes of hardened (well, okay…) alt.music lovers to one amorphous sobbing heap, had finally agreed to play End Of The Road, eight years after organisers had first written to invite him. To say that his set was ‘much-anticipated’ would be a slander to anticipation, with even his early Saturday morning soundcheck drawing a respectable crowd.

But forget the soundcheck: the main performance was a genuine beauty. A display of shimmering emotion delivered with grace and charm to a hushed, awed crowd, the set weaved and spun a perfect balance between Carrie & Lowell’s sombre glories and lighter touches from his back catalogue. Old home movies from Sufjan’s childhood flickered in the background, interspersed with a twinkling light show, gently enhancing the mood of the music. When you think ‘Festival Headline Set’ this is a million miles from what you imagine – there were no pyrotechnics, no grandstanding, no whoops and screams from the moshpit (indeed – no moshpit) – but it was nevertheless one of the most impressive headline shows I have ever witnessed. It ended with a protracted sequence of extended noise, chords stretching out into the Dorset night-time, the audience riveted and pulled along on a wave of what felt like euphoria. Safe to say, it was a highlight. But that’s the kind of wonderful experience that, year after year, End Of The Road seems to deliver. No dream, no hallucination, just a very very special place.