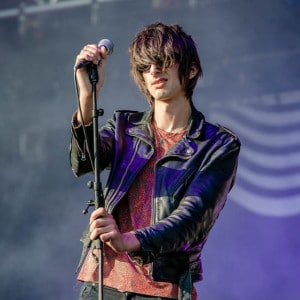 Field Day has grown to the extent that its title is now a misnomer. Spread for the first time across two days, the Victoria Park event still brings together London promoters and publications for a resolutely independent and fresh programme of new music and outlying icons.

Previous years have crammed together too many acts in too short a time, but for the last few editions bands have had time to play decent sized sets, and the space between stages similarly gives one a feel of a fine day of music sampling at one’s leisure, rather than a supermarket sweep style rush round as much as possible. Sound levels and queue times are also vastly improved and this year there was even sun.

Baltimore musician Lo-Fang‘s opening day lunchtime set is sparsely attended, but his classy pop easily commands the attention of those present. It’s graceful, yet imbued with just enough of a bubbling electronic undercurrent to remain compelling. Lo-Fang is a true storyteller and despite the live setting not being completely conducive to this the sight of him switching between guitar and violin and then wielding violin as a makeshift guitar is beguiling.

What’s immediately apparent from Sky Ferreira‘s set is she seems one of many spooked by ultimately erroneous reports of thunderstorms and hail as she arrives dressed in an oversized khaki parka which she resolutely keeps on throughout her set despite increasingly baking temperatures. It’s hard to tell if her performance is really good, really bad or just perfunctory. Ferreira is adept at seemingly blank disinterest, what she does have though is a clutch of outstanding vibrant pop songs and I Blame Myself and You’re Not The One are delivered with real panache and attitude. Elsewhere, the lulls find her struggling to connect with the crowd.

Omar Souleyman‘s late-starting set is incomprehensibly scheduled at the same time as Seun Kuti and Egypt 80 take to the main stage, in arguably the most irritating clash of the day. Souleyman and keyboardist Rizan Said, as ever, are curiously still despite the clattering, booty-shaking beats crunching out from the cheap, knackered keyboards. Occasionally Souleyman brings himself to clap or move his arms a little; and occasionally they both disappear in dry ice. His show is unchanged visually since we first saw him five years ago; it would benefit from moving up a level soon. 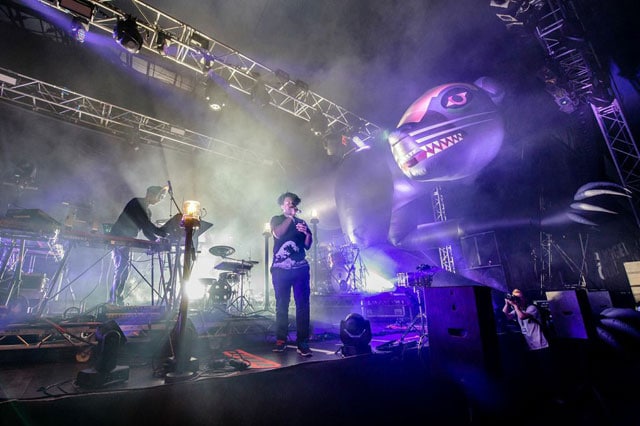 Neneh Cherry gained new fans with a run-through of highlights from new project Blank Project, made with Walthamstow’s Rocketnumbernine. The uncompromisingly lengthy Weightless and the title track are today played at a slower tempo than in her initial shows, allowing the words a chance to breathe and equalising the set’s vibe with sassy slower numbers like Spit Three Times. In her fiftieth year, Cherry demonstrates that she can still get a room – or a tent – moving, and tops the set off with a reworked version of her 1989 classic Buffalo Stance. It proves to be a delightful flourish.

Blood Orange‘s Dev Hynes is in an exuberant and chirpy mood and well he should. His main stage set is very well received. Hynes has grown into a true performer. Blood Orange’s mix of clipped, funk pop is slick, smart and assured. It’s abundantly clear that Hynes’s Prince idolisation is stronger than ever as he apes his guitar style on some shredding solos but this is more than a pastiche. Hynes is a star of his own making. It’s also a joy to hear a shout to Mansun’s Paul Draper as the band and co-vocalist Samantha Urbani perform a wonderful slow-jam version of I Can Only Disappoint U.

Jon Hopkins‘ Immunity album, which juxtaposes throbbing, pulsating techno with cinematic ambience and features the stunning singles Open Eye Signal and Collider, works well in a confined space for maximum claustrophobic bug-eyed immersion. Be it London’s Village Underground or Brighton’s Corn Exchange, a room with a roof seems to intensify the masterfully engineered and precisely placed component parts of his tracks. In broad sunny daylight, with a blue sky overhead, something of that intensity is lost, but Hopkins embraces the change of scenery by unleashing giant balls onto the heads of the sun-drenched crowd who variously bat them at each other or capture them to sit down on. It’s all rather a distraction from the sublime music emitting from the bare stage, Hopkins jerking and spasming behind his desk of tools doing who knows what, accompanied only by visuals on the small screens either side of the stage. But no chance to allow these tracks, through big speakers, to take over control of your body is to be missed.

Money are an interesting and slightly incongruous prospect. At first sight they seem fairly nondescript but they proceed to turn their short set on the pokey Shacklewell Arms stage into a spectacle that belies their prosaic surroundings. Singer Jamie Lee is intensely magnetic while their spindly, declicate sound swells to epic proportions. For those of us who’ve caught them live already they confirm their obvious upward trajectory; for others, they amount to a wonderful surprise. 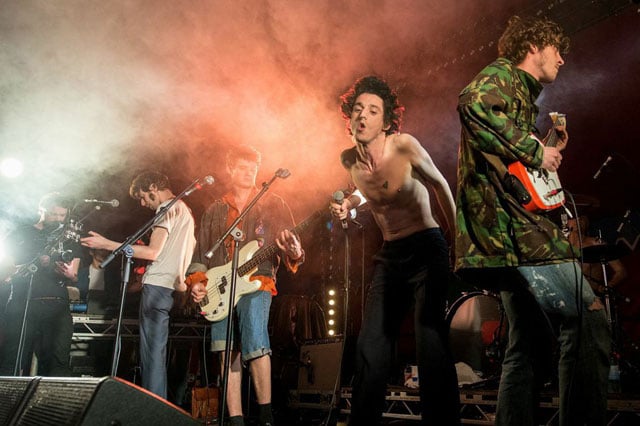 Making their fourth appearance headlining the Bugged Out tent, SBTRKT are Field Day veterans. They are also now a very big thing indeed. There’s a sense of real anticipation in the air and their atmospheric performance suitably matches it. The key is in the masterful pacing, taking in well placed new songs featuring Jessie Ware, Denai Moore and the ever excellent Sampha, who arrives to perform new track Temporary Viewing. Old favourites like a gloriously warped Wildfire and euphoric Never Never are ecstatically received and show just how far SBTRKT have come as a live proposition. A big year lies ahead.

Metronomy take a step up to headline the main stage, following the Mercury-nominated success of their album The English Riviera and this year’s follow-up Love Letters. Resplendent in shiny suits, they’re visible from half way down the park. Back at the Shacklewell Arms stage and on a much more intimate scale, Fat White Family gain a whole tent full of new fans with their hipster-friendly blend of rockabilly and raw authenticity. Front man Luis Saudi is shirtless from the off, looking every inch the rock star awaiting his dues, and the tent’s red colour and balmy temperature gives perfect backing to a set that’s as energetic as it is melodic.

With just four stages vying for attention, the second day’s timetable consists of around a third of the sets of Saturday, almost as if the Day 2 was a tentative step in two-day expansion. It began a little later, allowing for recovery for the punters and a cordoning off of the site to make it slightly less than half the size. There was less choice, especially in the evening when just one act was playing at any one time – a fact that would cause TENT FULL signs to be displayed outside one gig later on – but there was still much to see and hear, both at the stages and at the Village Mentality area; tugs-of-war and a brass band underlined that a day out at Field Day was not exclusively about catching the newest of the new.

The day is, in contrast to the electronics of Saturday, predominately guitar heavy and Brighton trio The Wytches provide a bracing opening on the main stage. Their sound is scabrous and swirling with ragged riffs and howled vocals creating a dark cloud on stage to counteract the blazing sunshine. 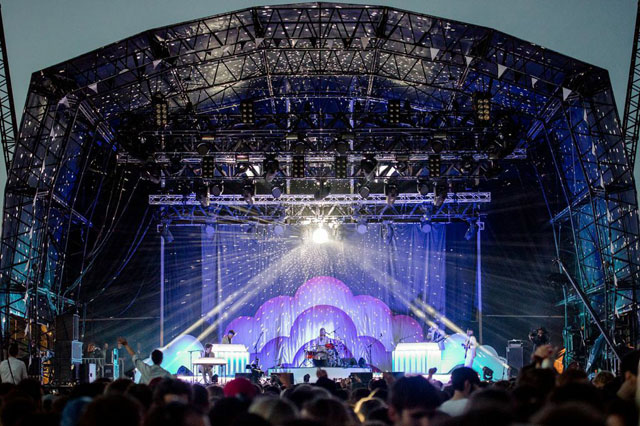 Australians Pond seem right at home with their main stage slot taking place at the height of the afternoon sun. Spaced out psych grooves and long jams allow you to langrorously drift off into a blissed out splendour that’s occasionally punctuated by heavy blasts of guitar freakouts. Like four different groups in one, Pond provide something for everyone.

Championed by the likes of Johnny Marr and Noel Gallagher, Temples proved today why they’re easily the best in what Britain has to offer currently on the psychedelic front. All big, fuzzy hair – and big, fuzzy melodies, too – the Kettering four-piece sound like a sonic kaleidoscope, a musical rainbow, a mixture of early-era Pink Floyd and latter-day Beatles, soaked in a sea of cosmic noise. Jangling guitars and hypnotising drones combine to make some pretty anthemic, psychedelic jams that sound like 2014’s version of ‘60s acid rock. Nothing ironic here, these guys are for real.

No matter how tight or powerfully-sounding the set, The Horrors were never going to pull off the perfect performance in broad daylight. With the sun still burning bright by the time 7pm came around, you couldn’t help but feel a bit bad for frontman Faris Badwan having to sport a thick leather jacket through the entire set, the band’s dark brand of sonic assault just not quite hitting the mark atmosphere-wise on a hot, sweaty day like this. Still, Badwan actually moved about the stage from time to time and they played a decent mixture of tracks from new album Luminous and older tracks, most especially from albums two and three.

There comes a time in every successful bands career when everything magically falls into place and they ascend onto a whole new exalted level. 2014 has seen Future Islands experience this rise and their headlining set on the Shacklewell Arms stage is a triumphant confirmation of their success. Of course, frontman Samuel T Herring is, despite appearances, the captivating and charismatic focal point. His performance is elaborate, primal and, crucially, wonderfully human. As he illuminates every song with guttural growls, leaps, sways and yelps you feel you’re in the presence of something quite special. The vibrant electronic pop of their songs is exciting enough but what’s really striking is the visceral connection between band and audience. On this evidence few bands can match Future Islands in all their chest-beating, heart-stopping brilliance. 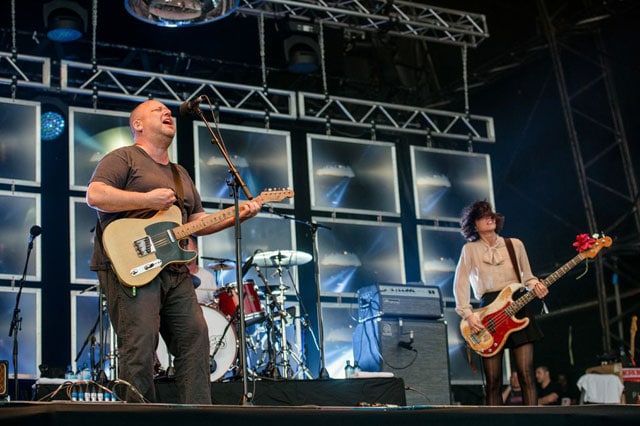 Short sharp and simple – that’s how the pros do it. Minimal on the talk and maximum on giving the crowd what they came for (one damn long set of classic songs), the legendary Pixies – or at least the current incarnation of, minus Kim Deal – plundered through a huge back catalogue for a whole hour, barely pausing at all between songs and touching on everything you’d hoped they’d play: Where Is My Mind, Here Comes Your Man, and best of all, Monkey Gone To Heaven. Pixies also easily brought out the most enthusiasm from this mixed bag of a crowd, with many punters actually headbanging, crowd surfing and jumping in a frenzy for the first time of the entire day, especially when the not-so-great-catching-skills of drummer David Lovering also provided some laughs. This is what a good show looks and sounds like; even if some will say this band is now a tribute band to itself, they fully deserved their headline slot.

Blessed with summery sunshine – a welcome contrast to torrential downpours of recent years – and a feeling that the festival’s artistic booking policy continues to differentiate it from the crowd, Field Day 2014 underlines what can be done with persistence, vision and a bit of meterological luck.