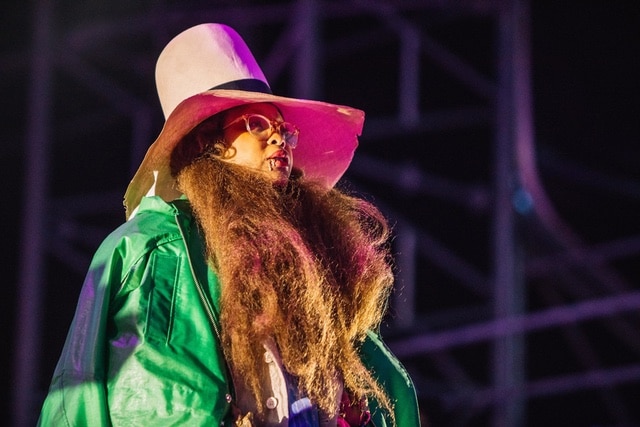 Looking back, we’ve had soggy Field Days, sunny Field Days and queues-as-far-as-the-eyes-can-see Field Days. But this year’s 12th outing was set to be the first small Field Day, due to the occupation of its usual home, Victoria Park, by the brand-new behemoth that is All Points East, waving its wallet about and snapping up an enviable selection of names.

Undaunted, plucky Field Day relocated south of the river to Brockwell Park, in the face of justifiable local scepticism following the issues surrounding 2017’s Sunfall, and finally getting the go-ahead towards the end of April this year.

As we arrive, the move seems all for the good: the site is nicely undulating, and there’s a pleasingly ‘local’ ambience, preserving the usual pseudo-village green schtick – a North vs. South London tug-o’-war, brass band, coconut shy and more that stays just the right side of the quaint/parochial divide. Options for food and drink too are vastly improved, with ample vegan and craft beer options (naturally), and queues for stalls never a huge issue.

Most importantly, in the face of All Points East’s (not to mention Primavera’s) monopoly on big names – particularly those with guitars – the line-up is of as high a quality as we’ve come to expect, but perhaps more diverse than ever, picked with an adventurous and eclectic eye and with young British jazz acts front and centre, especially on the opening day but liberally scattered throughout. There might have been as many saxophones at this event as guitars. We lost count. 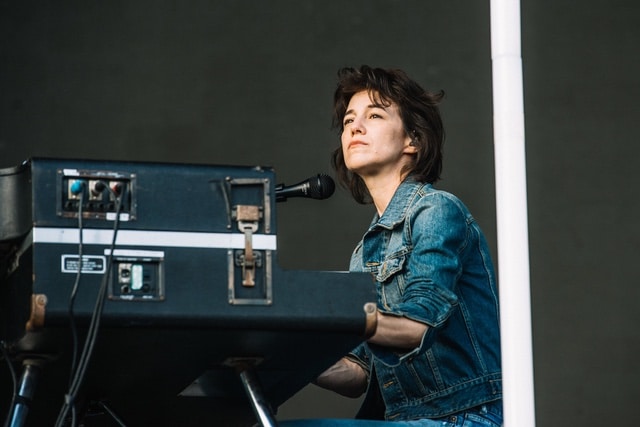 London-based five-piece Ezra Collective‘s afrobeat-flecked works draw a huge crowd which is rewarded with a breezy, free-flowing set including current Jedi-inspired single Mace Windu Riddim. Sons Of Kemet‘s high intensity performance has an even greater urgency, and saxophonist Nubya Garcia seems to harness the sunshine from outside to deliver a positively charged show that gets a whole tent dancing. Hailu Mergia‘s Ethio-jazz by contrast is proficient enough, though only really comes alive when he steps out from behind his keyboards to play accordion.

On the main stage more jazz was to be found in the shape of Norwichers Mammal Hands, who feel their way forward to a territory not dissimilar to early Portico Quartet, with whom they share a label; their woozy jazz proves to be a perfect complement to the afternoon sunshine. In similar conditions and on the same stage, the altogether funkier Nao – singer Neo Jessica Joshua’s stage name and nothing at all to do with the National Audit Office – also enjoys a great reception, and might have been precision tooled for the slot she finds herself in. At the other side of the park, one of the day’s biggest crowds is doing its best to see IAMDDB, which for anyone arriving late was a forlorn hope. The 21-year-old Mancunian’s trap-tinged jazz takes things in a quite different direction, and on the evidence of this crowd’s response her direction is already proving to be very popular.

Jordan Rakei, meanwhile, is one of the undoubted highlights of the first day. There’s a burgeoning spirit within his upbeat, feelgood set of jazz-tinted R&B, and tracks like Goodbyes and Nerve confirm the strength of last year’s Wallflower album. He finishes with Sorceress, which results in one of the most communal moments of the day in the packed tent.

There are times when headliner Erykah Badu‘s set seems to be a little fragmented and low key, not to mention shorter than expected due to a late arrival on stage and an unceremonious end to meet a strict curfew. But the crowd clearly approve, especially of older tracks like On & On and Next Lifetime from her 1997 debut Baduism. She claims she wrote Baduism “for the millennials”, which further endears her to the younger generations gathered in front of the main stage. She’s keen to interact with the crowd regularly throughout, which tends to interrupt the flow, but Window Seat has a lifting effect and the longer she plays the clearer it becomes that she’s the ideal headliner for today’s jazz and R&B centred bill.

The tented conclusion happening at the same time consists of a meeting of minds between afrobeat legend Tony Allen and Detroit techno exponent Jeff Mills, who freestyle-battle at each other and keyboardist Jean-Phi Dary with beaming grins and a clear love of collaboration which draws the crowd immediately into their performance, and wraps up the opening day with a big-hearted and good natured vibe. 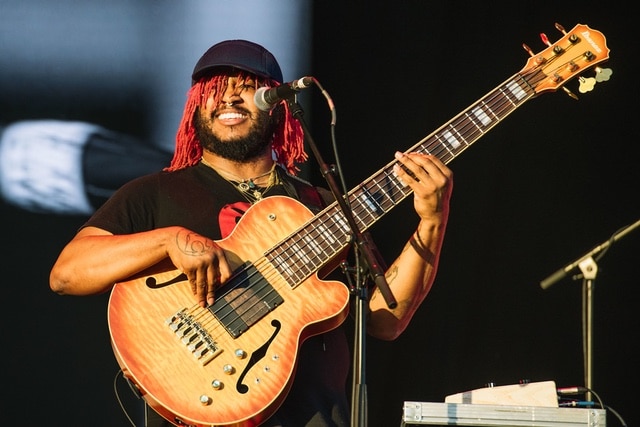 We arrive on Saturday to a noticeably busier site and the news that Earl Sweatshirt will no longer be appearing; he later issues a statement explaining that he’s cancelled all his European dates due to ongoing battles with anxiety and depression. So first up for us is Oumou Sangaré and her seven-piece band on the Eat Your Own Ears stage. From the off, they’re buzzing with colour and sound and quickly getting a relaxed crowd to their feet with Kounkoun. It’s a super-funky, richly bassy start to the day, full of long keyboard lines, tumbling patterns on the kamele n’goni and fidgety, knotty guitar lines. Kounadya is an early highlight, with the band playing rhythms crossing rhythms and Sangaré a commanding, captivating presence out front.

Another change from Friday is the return to Field Day of the Barn, the gargantuan structure debuted in 2017 to house Aphex Twin’s extraordinary set. Like much else on site, it feels somewhat smaller today, and, crucially, it’s closed off at all but one of its sides, the entrance/exits of which open out to one of the site’s main bars. It may only be half past two, but the Barn already appears to be near-capacity for Nils Frahm, with a lengthy line of punters trying to squeeze in, if only to see what the fuss is all about. Frahm delivers a set derived from that which earlier this year sold out the Barbican for four nights. Weaving together tracks from his latest album All Melody – Sunson’s beats elicit cheers – with older favourites Hammers and set closer Says, his set-up replete with Roland Juno, grand piano and straw spotlights looks entirely uncompromised.

Elsewhere, Zhu are an unexpected treat. Joining the DJ onstage are a gold lamé-clad – yes! – saxophonist and a hard rock guitarist. The tunes are old school house-based EDM with soulful vocals, but occasionally the music will quieten down and the two musicians each have a 30-second freak out. It seems a bit silly but definitely quirky enough to get massive cheers all around. One of the biggest comes for a brief excerpt from the late Avicii‘s Levels, which has the crowd throwing hand-hearts back at the stage.

Helena Hauff provides a welcome set of early-evening industrial techno, laced with the occasional moment of cheeky acid house, that whilst perhaps lacking any sense of creative ornament, does manage to provide streamlined rhythm, reliably intense beat drops and communal bliss to a sun damaged and eager young swarm. In a smaller tent later on, similarly happy vibes come thick and fast courtesy of DJ Klose One.

Back in the sunshine, Charlotte Gainsbourg has obviously come prepared to ‘put on A Show’, even if she makes it appear effortless, launching into an icily cool Lying With You and a coolly icy Ring-a-Ring o’Roses. There are lighting props, a stage set of empty white frames and colour-matched double-denim uniforms and white t-shirts for the entire band (the new Gap Band, perhaps?), yet somehow it seems as if she’s stumbled here from a photo shoot and is making these melodies up on the spot. The mix is a triumph, making the most of the PA; a giant wall of effects provides the modular warmth for a set that’s one of the day’s best, its highlights a rousing Deadly Valentine and a bittersweet Charlotte Forever. 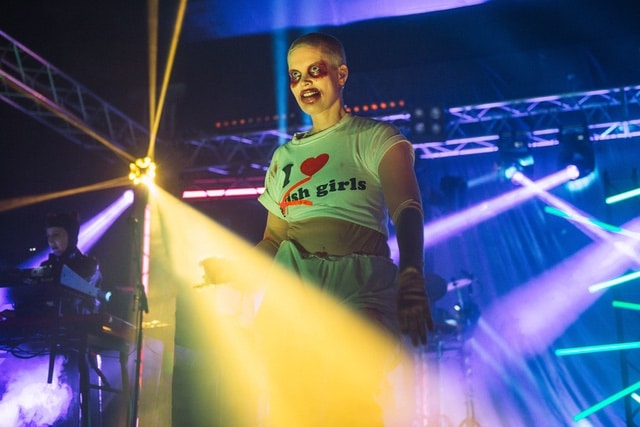 Next, there’s a fruitless attempt to catch Floating Points in the Barn, which is bursting at the seams, the tent’s three entrances/exits – for there’s no attempt to differentiate – already thronging, ominously with some people attempting to climb up sections of the scaffold by the doors in order to get a view, and no indication that those inside have any other means of getting out. We return to the only outdoor stage – it seems difficult to call it a main stage, given its final act of the day kicks off at 8pm, in a likely sop to objecting local residents – where Thundercat, aka Stephen Bruner, is in natty red shorts and wielding his mighty six-string bass, a testament to that adventurous booking policy. Field Day are effectively closing the largest stage of the festival with a three-piece playing 70 minutes plus of dazzlingly lithe and rhythmically complex jazz fusion and cosmic funk.

And it goes down a storm. This is in no small part down to Bruner’s charm and often bizarre wit, as quick as his fingers are nimble and time signatures frantically mutated. During a set largely drawn from last year’s sprawling odyssey Drunk, amid frenetic duelling with drummer Justin Brown, also on dazzling form, we get a tale of a teenage trip to Tokyo (complete with a shoutout to Cornelius, currently onstage elsewhere in one of the day’s more unfortunate clashes); a dedication of Friend Zone to “all the video gamers out there”; and a few words for Lianne La Havas, who “always has lotion for my kneecaps”. Towards the end, Erykah Badu makes a welcome return, adding to a triumphant Them Changes, then tinkling nonchalantly at the keys on the closing snippet of Show You The Way.

Inevitably the crowd look for somewhere else to go, and the programme divides them between Fever Ray, in a tent, and Four Tet, at the Barn. Punters at the latter had run out of luck. As had seemed inevitable from the start, the stage’s obvious design issues and the lack of circulating space surrounding it were finally causing things to fall apart, and Four Tet’s set was paused “to allow concerns about congestion to be addressed”, according to the festival’s official statement. Something of the set eventually resumed, but experiences reported across social media underlined that entrances and exits, properly stewarded and with circulating space enough to actually circulate, are not optional extras. What had otherwise been a hugely positive weekend for organisers dealing with a new site had, with the Barn stage, acquired a flipside, and one that will need investigating.

Entrances at Fever Ray’s show were also crush-depth deep, but we managed to pick our way right round to the other side of the tent and find some space stage right from where we could enjoy Karin Dreijer’s honed-to-perfection demonstration of her music, her feminism and herself. She and her bandmates are wearing the same outfits they’ve worn everywhere on their world tour, including their sold-out date at London’s Troxy earlier this year, and Dreijer’s wicked-imp grin is present and correct for the balance of a set that sports sound to match her music. Showcasing the bulk of recent album Plunge, To The Moon And Back’s central mic drop moment – “I want to run my fingers up your pussy” – is but one of many highlights which included retooled cuts from her debut album, not least a singalong Keep The Streets Empty, and a rapturously received IDK About U.

It proves to be one of the weekend’s most thrilling performances, at a sun-drenched festival festooned with fantastic artistry, visionary dedication to seeking out the new and exciting, and which so nearly got everything right.