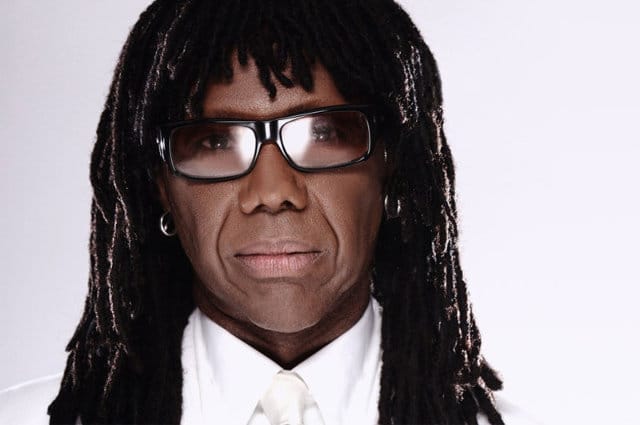 Chic maestro Nile Rodgers‘ Fold Festival began life in the US in 2015, from where it found its way across the pond to pitch up in the garden of a sometime bishop’s palace in west London. The ingredients have changed little in the intervening year; Chic play all three nights, before, with and after a handpicked selection of musicians ranging from up and coming to legendary, all of whom have worked with the white-jacketed disco guitar icon, and the feel is one of relaxed intimacy. Arriving at a time when the country was collectively just beginning to get its head around the anything-but-relaxing consequences of the EU referendum result, Rodgers’ timeless music offered some much needed balm to bruised brains.

The grounds of Fulham Palace, with the building itself forming an illuminated backdrop, make for an upscale wedding reception atmosphere, and the festival site is surprisingly intimate. Security is relaxed, and a well-heeled walk along the tree-lined north bank of the Thames from Putney Bridge makes for a pleasing festival prelude – despite falling on Glastonbury weekend and being subject to changeable weather conditions, there would be no trenchfoot setting in hereabouts. For those with the budget for such things, a range of VIP packages involve staying the night in the palace itself, complete with three course meal, champagne and access to the golden circle, as well as a meet-and-greet with Rodgers himself. This is not a normal festival.

Having successfully overcome cancer, Rodgers has been throwing himself more than ever at his music in recent years, continuing to do what he does best and surf on the post-Daft Punk wave that has propelled his brand of upbeat hook-laden pop back into public consciousness. A man whose records – as producer, performer, writer – have sold upwards of 300 million copies, Rodgers is justifiably never shy of telling his recent story, and it’s a compelling one, explaining as it does the admirable motivation behind why he needs music. It’s difficult to feel other than grateful that he won his fight, and is around to play from his considerable back catalogue of gold-plated hits.

And what hits. Chic’s set each night features a run-through of chart-busting songs from five different decades. Madonna‘s Like A Virgin sits alongside Daft Punk’s Get Lucky, Duran Duran‘s Notorious and umpteen else from the years between. There’s also the best of Chic’s own legendary disco funk, with Dance, Dance, Dance, Le Freak and Everybody Dance leading inevitably to Good Times closing the set. The stars of those records and their star power are missing visually, but Chic’s vocalists – especially Kimberly Davis – do grand jobs of filling in the blanks.

Chic feature guest stars each night, in sets that are otherwise similar. Alison Moyet drops by for a mini-set within the set on the opening night, with Don’t Go from her Yazoo days wheeled out alongside more recent material. On the final night Angie Stone takes the guest spot and tells us she’s flown in from Chicago specially to urge us all to sing. Her smoky delivery and demands of her audience suggest, as with Moyet, that she might have been afforded a full set of her own, but it’s good to have her all the same.

Rodgers being rather humble, even in charge of his own festival he surrenders top billing on the first two nights, first to Labrinth and then to Beck. Labrinth’s headline spot comes at an odd time for the Syco signing, four years on from his debut album Electronic Earth and amid delays to its follow-up, Take Me To The Truth, but if he has any career worries they don’t show tonight; instead, sunny energy is offered to all as he alternates between keyboard, guitar and flashy showman moves. His spot on the second night is taken by Beck, who warms up for Glastonbury and a larger London show at the Brixton Academy, wheeling out classics Devil’s Haircut and Loser in what is surely for him these days an unusually intimate space. John Newman pops up on the final night, albeit in a supporting role.

Taking place in the same weekend as Glastonbury, Fold London could hardly be a more different proposition; the genteel surroundings, the lack of mud and the small crowd all made for a pleasingly different experience. If it felt like three nights of Chic gigs with sundry trimmings, maybe that wasn’t such a bad thing.