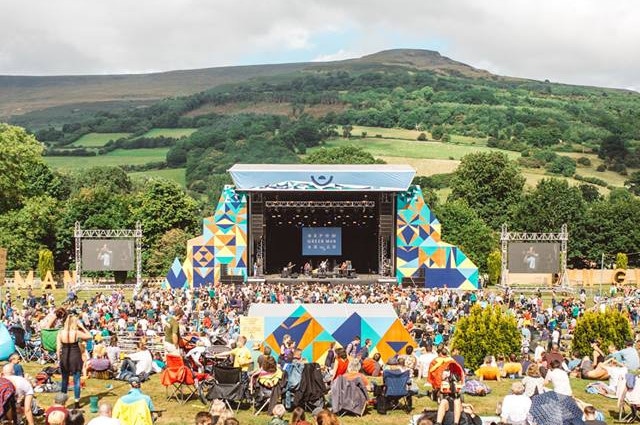 You’ll be hard pushed to find a more impressive setting for a festival than the one that Green Man resides in. Glanusk Estate is slap bang in the middle of Brecon Beacons National Park, and unlike say Latitude Festival’s immaculately groomed Henham Park, this spot it more rugged and dramatic. The Mountain Stage sits nestled in a valley, its backdrop the imposing Black Mountains, and the site is flanked by the mighty River Usk. The setting feels a little more authentically wild than most festivals and the weather does a good job of adding to that. The whole weekend is an endless shift between showers and bright spells, as the high winds keep the weather patterns on a swift turnover. Equally, there’s no mobile internet and very patchy phone reception, which all helps to focus the mind on the present; on Green Man and all the many treats it has to offer.

Arriving on Thursday gives plenty of time for a good scout around to check out the aforementioned Mountain Stage, as well as the Far Out tent and the Walled Garden that are amongst the many venues on offer. Early arrivals are treated to a double header of King Gizzard And The Wizard Lizard and Wild Beasts. Although to be fair it seems like most of the festival’s population is already in situ, so getting near the moderately sized Far Out tent to watch either is nigh on impossible. Even from a far off vantage point KGATWL sound suitably wildly psychedelic and Wild Beasts are in full on party mode with a triumphant All The Kings Men closing proceedings.

First up for the start of the festival proper its The Oh Hellos on the Mountain Stage, and the band seem very impressed that they have secured a good turnout just when the heavens decide to open. But then if you come from Texas then witnessing a bunch of folk turn out in the rain for your, relatively, unknown band may seem curious. Originally a sibling duo of Maggie and Tyler Heath, they went own to recruit a number of friends to form a touring band, and the 10 piece that take to the stage at Green Man enthuse you into submission. Their music, on record, is fairly gentle folk rock, but live the band take to their instruments like their life depends on it. Their performance is exuberant, incongruous and utterly compelling.

The sun makes an apt appearance for Meilyr Jones’ whimsical chamber pop, and his performance is as satisfying as expected. With the sun still shining, it’s time to head inside the Far Out tent for Kamasi Washington, and that seems a shame – not only because of the rare rays – but also it just feels like his expansive music would be better served on the main stage. As it happens, that is probably the case. Not only as the tent is rammed, but also Washington takes to the stage only to leave very shorty afterwards as his mic isn’t functioning. After a half hour delay the set finally starts, but Change of the Guard is marred by continuing sound problems. Despite these initial issues the sound does improve and he goes on to deliver a blistering set.

White Denim, its has to be said, are a little disappointing in the main part because their set is so slick. Their performance seems a little too polished and fails to capture the excitement of their records. On the other hand James Blake’s soulful dubstep is unpicked for his main stage performance to ensure that the often downbeat nature of his music makes for a marvellous headline performance. The beats seem heavier and more immediate and are perfectly complimented by his expressive vocals.

In a late night twist about as far from the previous two acts, the night is rounded off with Charlotte Church at the Walled Garden stage treating the crowd to an exuberant blast of the maddest selection of pop covers ever put together. She flits from Sugarbabes’ Overload to Super Furry Animals’ Hometown Unicorn and Blue Boy’s Remember Me to Neutral Milk Hotel’s Holland 1945. And En Vogue’s Don’t Let Go is a real highlight. It might not work could she not actually sing and she looks pretty bloody amazing in a gold sequin number. Suffice to say Church instigated a whole lot of fun for a very appreciative crowd. Like Guilty Pleasures, but better.

First up for Saturday morning is another covers act, the wonderfully titled Deep Throat Choir. The all women choir from Hackney do a brilliant job of creating their own unique take on an array of covers with just their voices and a set of drums – the highlights being Björk’s Stonemilker and Sade’s Sweetest Taboo.

Cate Le Bon is another of Saturday’s high points. She plays a set that relies heavily on this year’s excellent Crab Day – the title track and Wonderful being particular favourites. It’s left to Edward Sharpe And The Magnetic Zeros to lift the crowd after Tindersticks’ performance, and they do a fine job. Frontman Alexander Ebert spends a lot of time diving into the crowd whilst delivering joyous versions of Up From Below, Home and a rousing cover of John Lennon’s Instant Karma.

Next up a tricky choice between Laura Marling on the Mountain Stage or Battles at the Far Out tent. Battles it is, and the experimental New Yorkers don’t disappoint. There extended jams build a frenetic atmosphere that is concluded with a dazzling The Yabba. A fine way to finish off the penultimate evening.

The final day of the festival starts with an exciting prospect; a performance by Moonlandingz the once fictional, and now brought to life, project conceived by members of Fat White Family and Sean Lennon, amongst others. It’s a high energy, exciting performance of scuzzy, psychedelic rock. Lias Saoudi shares vocal duties on a number of tracks with Slow Club’s Rebecca Taylor for a maniacal and highly charged performance that would have been better served with a late night slot, but even so they’re a treat to watch.

Taylor makes a swift move to the main stage for her band’s own performance which although brilliant it’s a gear shift from the aforementioned set that feels like too much of a contrast. And perhaps Taylor feels it too, as she gently berates the crowd for their lack of enthusiasm.

It feels like a real rollercoaster of a day when Songhoy Blues take the stage next wooing the audience with their masterful dessert blues and energy. The Malian band are a joy to behold and its impossible not to fall for frontman Aliou Touré’s euphoric performance. He has the crowd eating out of his hands as he instructs them in various dances making for one of the sets of the festival.

Julia Holter’s up next, and although the tempo is slowed this music is no less affecting for it. Just as her performance is a more stationary one she still manages to engage the audience with wonderful renditions of tracks like Feel You that shine by being both stately and poised. Sadly, her set is cut slightly short by the rain, which drenches the instruments.

Next is the boy wonder himself Ezra Furman ,who is at his vampish best in the Far Out tent banging out one after the other of his singular yet catchy ditties for outsiders the world over. Then main stage proceedings are bought to a close by Belle and Sebastian, who are inexplicably making their Green Man debut. They’re pretty much a perfect round up, as they mix the danceable disco of Girls in Peacetime Want to Dance cuts with old favourites like Judy And The Dream of Horses. And their now standard stage invasion during Boy With the Arab Strap is on a scale the band have never seen – so large in fact the band can’t be seen for some time.

The main stage may have seen its finale, but there’s still the burning of the Green Man and associated fireworks which is great fun, and then a couple of DJ sets to ward off the end of the festival for an hour or two. DJ Yoda is at his crowd pleasing best, banging out endless slices of pop perfection like Tribe Called Quest’s Can I Kick It? and Prince’s Kiss. He also get props for spinning the title track from Netflix hugely popular Stranger Things. Then it’s left to journalist Pete Paphides to share his slices of pop heaven to a small but enthusiastic crowd. He may not have the technical prowess of Yoda, but all are somehow grateful to be throwing themselves around to Don Henley’s Boys of Summer at three in the morning in the middle of the Brecons.

Now in its 14th year, the Green Man Festival team have proven themselves masters of curation and atmosphere. A weekend that celebrates good music and its environment like no other.