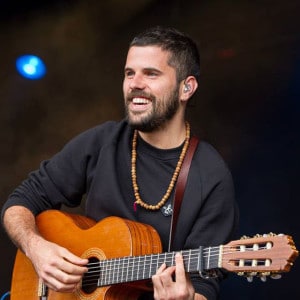 The festivities kicked off on Thursday night, setting the theme for two of the supporting stages, with The Waterboys playing rousing Celtic folk tunes to a full Far Out tent, the second stage; and Pink Oculis, a soul and hip hop vocalist playing to a happily bopping crowd of hippies in Chai Wallahs, a dance tent with the original addition of a tea and coffee bar.

Friday morning saw the site come to life, with Wildest Dreams opening the main Mountain Stage. Winners of the Green Man Rising competition to take the slot, their dreamy melodious electropop was an excellent backdrop for hundreds of marauding toddlers making giant bubbles.

Welsh raconteur John Mouse opened the Walled Garden stage, playing slightly belligerent songs to an appreciative audience. With a chip shop and a pub, the small garden was a delight for more offbeat music.

Ergo Shmidt played sweeping, Coldplay-esque piano songs to a sleepy Chai Wallahs. Charles Howl played raucous, baggy-influenced noise to a keen crowd who may or may not have been largely comprised of their parents, on the gorgeous Green Man Rising stage, hosting upcoming musical talents, many local.

Back on the Mountain, Tunng offered a jaunty folk angle punctuated with strange sci-fi noises, before Sun Kil Moon wove plaintive guitar harmonies around lo-fi songs of heartbreak, slowing the marauding toddlers not one jot.

Augustines took to the Mountain Stage with their divisive Bruce Springsteen, U2-citing rock anthems. Opener Nothing To Lose But Your Head starts big and they get bigger – this is an excited band. It’s singer Billy’s birthday! It’s keyboardist Eric’s birthday tomorrow!! “We’re from New York City! We went to a fucking castle today!” The enthusiasm is contagious. Festival gossip throughout the weekend has this as one of the highlight sets.

Over at Far Out, Poliça played understated electronica, finishing to rapture with Chain My Name, setting the tone for stage headliner Caribou, with their extraordinary alchemy of intelligent, cool house with a warm, human tone – a set that promised big things for their upcoming new album.

Daughter played to the Mountain Stage’s biggest crowd so far, their wistful atmospherics preparing the crowd for headliners Beirut, who blazed through a set of proto-classics from 2011’s The Rip Tide, with an enormous sense of carnival. The toddlers were now asleep in fairylight-decked carts and wagons, but the adults were enraptured until the very last note of A Sunday Smile.

Good grief, is it only Saturday? The sun was out, the toddlers and their bubbles were back and Zachary Cale regaled the early crowds with pretty, wistful Americana as they ate breakfast from the Strumpets with Crumpets van. Up next was Mutual Benefit, with their luscious, string-sprinkled, self-contained anthems. Angel Olsen rounded off the morning with stompy, big-voiced indie.

Woman’s Hour looked moody in the Far Out tent, the sun from outside highlighting the gloom inside. Their melodic, rather insouciant indie works well with the low lighting, but a louche, leisure suit cover of Dancing In The Dark was difficult.

Chai Wallahs hosted Count Bobo, a funky, skanky ska group inspiring dancing way outside the tent, who created the defining moment of the festival with a brilliant version of Pink Elephants from Dumbo.

The distinctive voice of Hamilton Leithauser drifted from the Mountain Stage: gravelly and emotive, fine-tuned from all those years fronting The Walkmen. Chantreuse Sharon Van Etten followed with lilting guitar and piano-driven balladry, preparing the way for The War On Drugs, who brought their own take on the current nostalgia for classic American explorations of the soul.

Meanwhile, The Dark Jokes from Edinburgh played on a strip of grass next to a giant interactive drum machine: shouty, fuzzy and punky, an excellent palette cleanser. Broken Brass Ensemble from Holland warmed up an already sweaty Chai Wallahs with fun, singalong brass ska and skiffle harmonies. Jeffrey Lewis and the Jrams invited their captive audience at the Walled Garden to consider WWPRD: What Would Pussy Riot Do? Probably not head back to the Mountain Stage for Mercury Rev, but someone must, as it’s time for the legendary New York band to play their 1998 sweeping classic Deserter’s Songs. Epic and sprawling, yet dreamy and delicate, each song is treated like an old friend – as indeed is a cover of Sparklehorse’s Sea Of Teeth, dedicated to Mark Linkous, a troubled friend who died in 2010.

Slint took to the Far Out tent with no preamble, no band chit chat, no glitter or embellishment to distract from the visceral, lurching intricacy of their uniquely heavy sound. Long, silent spaces between songs see a mass exodus of young people from the tent, never to return, but the oldies that stay are positively enraptured.

Sunday already? For a dramatic change of pace, Poco Drom opened the Solar Stage in the science-themed Einstein’s Garden, singing interactive songs about animals. Not being the target demographic for this, it’s time for The May Birds in the Walled Garden, lovely triphop-inflected girlgroup harmonies.

Over on Mountain, Other Lives played cleverly orchestrated folk with a driving percussion presence; Boy And Bear greeted the sudden blast of intense sunshine with their own blast of radio-friendly, danceable bluesy rock; Anna Calvi blew the last of the cobwebs away with her dramatic, intense, cinematic songs.

First Aid Kit took the prize for ‘band that we didn’t know we knew the words to’, leading an unexpected singalong on country ditties Master Pretender and Emmylou, before headliners Neutral Milk Hotel took to the stage for a riotous, glorious set of urgent, sophisticated punk songs with their original In the Aeroplane Over the Sea line-up.

Like all the best festivals, the music is merely one ingredient. There isn’t time or space to wax on about the tiny wooden houses in trees, the glowing teeth in the denture disco, the duck petting zoo, the live-score silent movie about polar explorer Ernest Shackleton, and so much more. The burning of the Green Man and an explosion of fireworks around midnight is merely one more extraordinary flourish amidst a weekend of countless others.