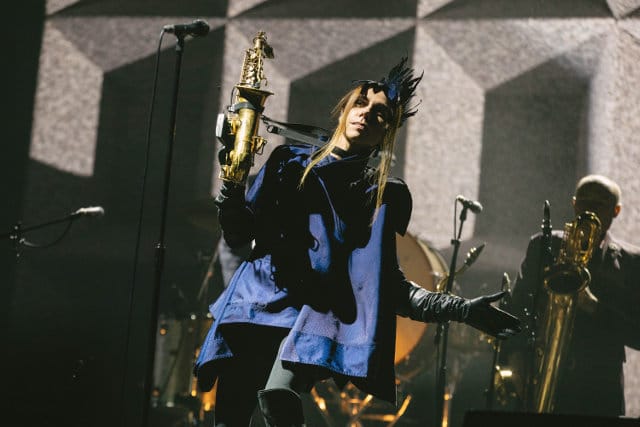 PJ Harvey @ Green Man 2017 (Photo: Poona Ghana)
Before you even hear the first note, a scream of feedback or pounding beats blare out of one of Green Man’s sound systems, the event has a dizzy magnetism. That initial draw is due largely to the beauty of the festival’s Brecon Beacons setting, which lies deep in a valley hugged by the Black Mountains. Alas, yet again the organisers have compiled a mouth watering bill that leaves little room for lingering on countryside appreciation here, but it has and does add to its unique charm.

Pity those who didn’t arrive in time for Anna Meredith’s performance. As just one of Thursday night’s opening acts for the 15th anniversary of the Welsh festival she and her band set the bar fantastically high. Of course armed with songs like Nautilus and the Vapours – which open and close the set in bombastic and beautiful fashion – Meredith leaves the starting blocks with the upper hand. But since the release of Varmints last year she has also proved herself to be one of the best live acts out there. The skilfully variegated show takes in bouncing pop, touching quieter moments and often reaches explosive peaks. It’s basically the musical equivalent of being tasered… in a good way. Badbadnotgood and Ride follow in their wake, and despite solid sets from both bands it’s hard not to feel like it’s a bit of a comedown, if a fine one nonetheless.

Friday offers an opening set from the mysterious WH Lung, who having released just two songs so far have bagged themselves both a Green Man and an End of the Road slot. It’s a performance that builds from slow burning broodiness through to fist clenching intensity. The lead singer is fairly mesmerising, rarely breaking eye contact with the crowd and has moves unique and expressive enough to rival Future Islands’ Samuel T Herring. Their sprawling, but tightly focused, psych/krautrock is played out in heady fashion ensuring they’re one to watch in the future.

A switch to the Mountain stage finds Happyness recalling the slacker quality of Pavement, the sweet harmonies of Teenage Fanclub, and playing their hearts out every step of the way. They also make full use of a sole mannequin leg for shredding and general waving about, which is nice. Then it’s high hopes for Hurray For The Riff Raff, who don’t disappoint. The set swings heavily in favour of this year’s excellent Navigator, and its themes feel even more poignant just a few short months following its release. Alynda Segarra is an arresting performer, who both entertains ( a killer cover of Springsteen’s Dancing in the Dark) and achieves pathos (a hugely affecting rendition of Pa’lante). She tells the crowd that her band are the resistance, and if this is what it sounds like, it’s gonna be sweet. 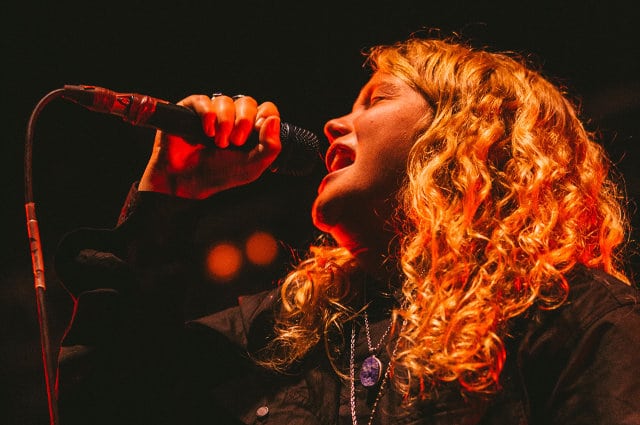 Kate Tempest @ Green Man 2017 (Photo: Olivia Williams)
Unless you were super organised, it was nigh on impossible to catch either Nadia Reed or Aldous Harding who proved they have more fans than the modestly sized walled garden can contain. But disappointment is soon alleviated by the always dependable British Sea Power whose back catalogue is made for festival slots. Tracks like Carrion and Waving Flags hit the emotional and anthemic peaks that they feel like they were made for.

Next, great excitement for what must be a major coup for the festival. Lift To Experience have gained quite the reputation given they have just one record – albeit a double album that imagines the second coming of Christ in their native Texas. Following his forays into heartbreak drenched solo records, Josh T Pearson returns clean shaven, lively and with a droll sense of humour to lead the band through a dazzling set. Expansive post-rock spirituals like These Are The Days are truly euphoric live moments, and a thrill to experience.

Having left a scorched trail in their path, it’s up to Future Islands to carry the elation and run with it, and they deliver a set that is as jubilant as you might expect. Herring is on top form, working the crowd with every inch of his body and spirit, delivering every air-punch and death growl like it’s his last. 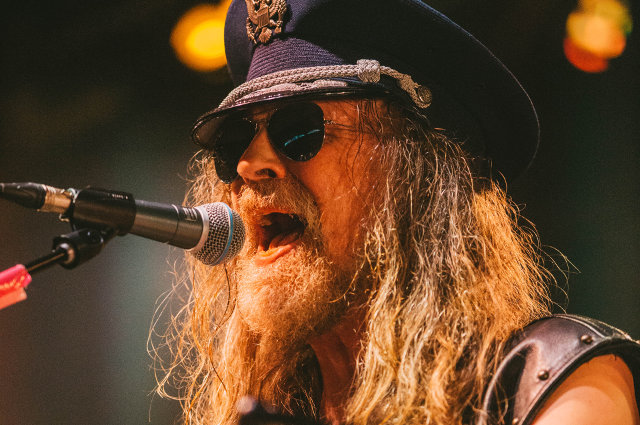 Julian Cope @ Green Man 2017 (Photo: Olivia Williams)
The Saturday lineup is a gentler prospecting many respects, with contemporary and veteran folk acts taking centre stage. Newcomer Siobhan Wilson won the Green Man rising competition that saw her earn an early set on the Mountain stage, and she performs for the second time at the Rising Stage. It’s a cracking performance to kick off Saturday, as Wilson eases the audience gently into the day with her enchanting melodies and gossamer smooth voice. Then she goes on to throw the curveball of the weekend, a charming – yes charming – cover of System Of A Down’s Chop Suey.

Following as lovely a set as you might expect from This Is the Kit it’s time for the legendary folk-pioneer that is Shirley Collins. Last year she released Lodestar, her first album in 38 years, and there doesn’t seem to be a better event at which to celebrate her return. Collins beams from the stage, embracing the festival spirit with a smudge of festival glitter adorning each cheek, and performs a quietly captivating set that moves and delights. Then Michael Kiwanuka delivers a performance that includes a gloriously sweeping Cold Little Heart and a stirring Love and Hate that see him reach for the political grace of Marvin Gaye’s music, and the earthy emotion of Bill Withers.

Saturday night’s headliner is Ryan Adams and, whilst he certainly tries hard with impressively excessive stage props and leg-spread arena-rock posturing, it’s a show that fails to ignite. In many respects, there’s little to criticise, but somehow the required connection isn’t made.

Surely it’s pretty much official that Deep Throat Choir are Green Man’s house band by now. It’s their fourth time at the festival, and as always it’s a wonderful way to open up the final day of the event and soothe an ever culminating hangover. In a nod to the day’s headliner, they even throw in a brilliant cover of PJ Harvey’s the Words That Maketh Murder. 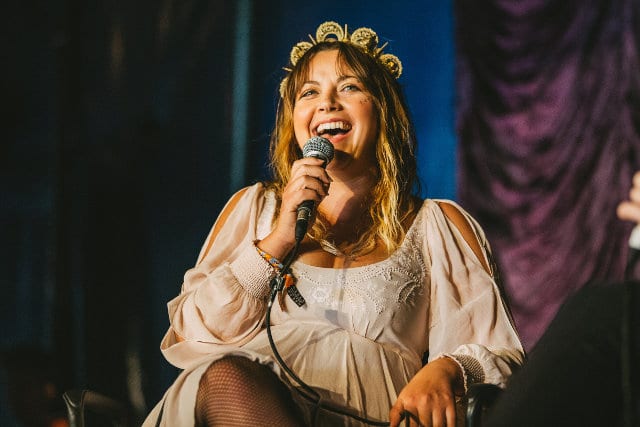 Charlotte Church @ Green Man 2017 (Photo: Olivia Williams)
It’s fortuitous that there’s a solid run of acts at the Far Out tent as the heaven’s begin to open. Snugly tucked inside it’s down to South-London punks Shame kick off the run. Front man Charlie Steen burst onto the stage with a determination that he never lets slide, and proves to be difficult not to fall for. A sweaty, bare-chest-beating riot. Sunflower Bean also impress with a live energy that injects a new level of joy into the tracks from last year’s fine Human Ceremony. The Brooklyn-based trio are heavier and more urgent than on record and deliver a pumped show.

But of the Sunday afternoon line up in Far Out, it’s Richard Dawson that delivers one of the performances of the festival. Highlights include Ghost of a Tree, performed solo whilst he foot stomped along to his own blistering, building vocal which raises the roof; equally, Ogre is deeply unique, idiosyncratic, human music delivered with delight. Later Field Music dish out a faultless skit that much to the pleasure of the crowd, and the multidisciplinary raconteur Julian Cope entertains as much with his mid-song tales of psychedelics and mellotrons as with his music.

PJ Harvey closes the festival’s main stage with drama, a sense of occasion, and the presence that has set her apart for some years now. She rattles through tracks from Let England Shake and The Hope Six Demolition Project effortlessly and impressively. Older cuts are also provided in the form of a wonderfully spiky 50 Ft Queenie before she smashes the deep, dark groove of To Bring You My Love. It’s a majestic end to a 15th anniversary edition of this exceptional festival that has become a mark of quality.