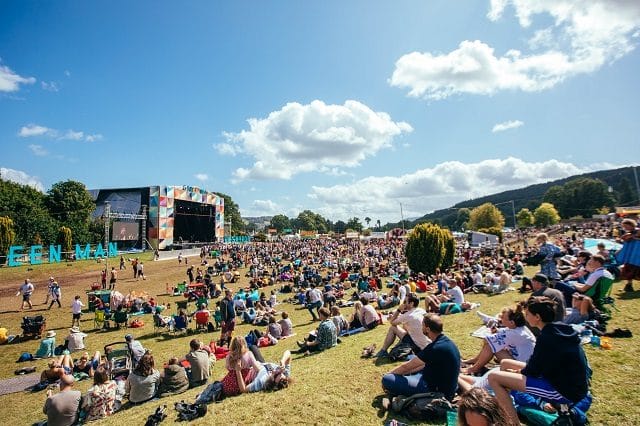 Complaining about rainfall at a music festival held in the Brecon Beacons is no better than screaming at the passage of time. Much better to embrace it with full abandon, arms wide, self-comfort be damned. It’s a philosophy that certainly defines Fat White Family’s set on the Mountain Stage at Green Man on Friday afternoon, as frontman Lias Saoudi beckons the heavens with a cocksure smirk that knows the apocalyptic conditions can only enhance the beautifully deconstructed mayhem of his band’s set.

The audience are split; there are followers and sceptics. The latter never turn their focus too far away from the discomfort of their sodden jeans and not-as-waterproof-as-advertised waterproofs, but the former are hovering on the edge of delirium. The band’s aesthetic is so familiar now: reckless, addled, romantic, confrontational. They dip into their back catalogue freely, with an almost shamanic I Am Mark E. Smith the centrepiece, the performance of which sees revellers starting a rain dance of their own. Why turn back, now that we’ve come so far? 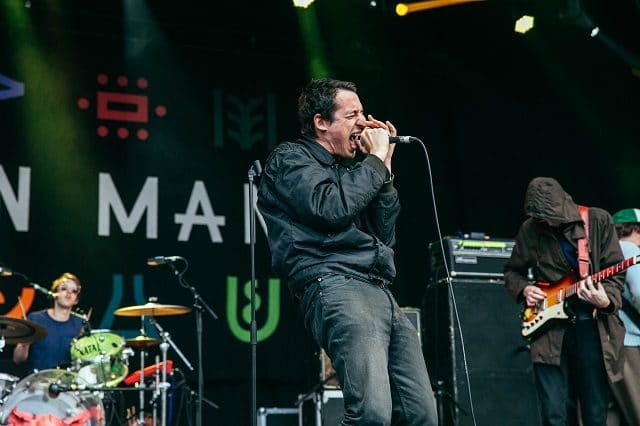 For many present, the touch paper had been lit an hour earlier by a similarly incendiary set by Pigs Pigs Pigs Pigs Pigs Pigs Pigs in the Far Out Tent, a recall to the roots of heavy guitar music, a collision between black country rock and Iggy posturing. “Welcome to Donnington 1979!” bellows frontman Matt Baty, and it could have been. As sets to break a crowd into a festival go, this is a blockbuster, but it is only as the people stream out of the tent that it becomes clear that Pigs X7 have burst a hole in the sky too.

It would transpire that Friday would be the only wet day of Green Man 2019. Bands in the Far Out Tent inevitably benefit from the conditions, whilst Mountain Stage headliners Yo La Tengo are victims. Their textured, thoughtfully experimental indie has a loyal following but the numbers are low in the crowd. When favourites like I Heard You Looking and Autumn Sweater arrive, there is love in the air, but the sense of climax that great headline sets can elicit is sadly missing. 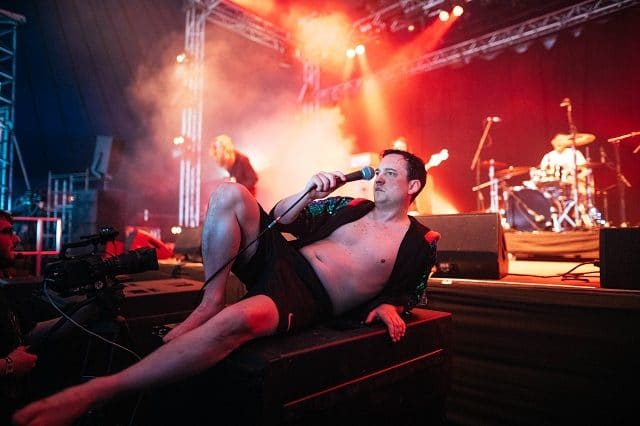 When Saturday comes, it is suncream weather, such are the times that we live in. Jockstrap play an early afternoon set at Far Out, the most beguiling and exciting emerging band at the festival. They are experimentalists in the least precocious sense of the word. Theoretically a duo, there are five musicians on stage, each absorbed in a deadpan stillness. Barely a word is spoken between tracks, barely a muscle movement wasted. They make sounds out of music rather than music out of sounds; samples of strings, for example, are chopped and spliced until they become no more than building blocks. They are not aiming to create tunes and they appear to enjoy that an audience is programmed to expect them to. They take your expectations and they torture them, they dance on their graves. Beauty warps and deteriorates in Jockstrap’s hands, unless you start to get used to that, at which point they will break into a pretty melody, just their latest experiment. It is fun to see music treated this way, a young voice hungry to find the new thing. Ones to watch.

By Friday’s standards, Saturday afternoon is idyllic. For a relatively small site, there is much to do – take a wonder and one might discover an impromptu two-person theatre act with sentient hedgehogs, for example, or stumble across a hypnotic set by British jazz supremos Sons of Kemet. You might head into the cinema tent to catch some of the marvellous new Frank Sidebottom documentary, or, if you’re really lucky, you might become a character in a performance art piece concerning a recently-ditched crying bride and her adult baby (don’t ask). Meanwhile, over in Far Out, A Certain Ratio are transporting revellers back to the Hacienda in 1989, a live band incarnation of acid house, their funk-punk opus Shack Up a perennial highlight. Fast forward just a few years and you arrive at Stereolab’s set on the Mountain Stage, a consummate slab of psych that proves how ahead of their time Tim Gane and Laetitia Sadier were all along.

Ushering in the night-time in Far Out are Car Seat Headrest, the Virginia band led by Will Toledo that have provided an authorial voice for the disenchanted indie lover that had long been missing. 2016’s Teens of Denial remains one of modern guitar music’s major works, an excuse to sing (or scream) away the existential worries that that particular year brought to the world. The tent is brimming, simmering at boiling point, until the chorus of Drunk Drivers/Killer Whales arrives. To hear the conviction in the cries of thousands of voices as they scream, “It doesn’t have to be like this,” is genuinely moving, a raging catharsis that expunges the drip-drip-drip horror of our daily news cycle. When they return for an encore of Stevie Wonder’s Superstition, we’ve earned the right to have some fun.

Sunday afternoon at a festival has a character all of its own. Bodies and minds are weary, but spirits are high. The Talking Shop Stage comes into its own in such moments, this year, as last, expertly curated by Laura Barton (Saturday had seen a sell out for a quite brilliant PowerPoint presentation by Jarvis Cocker, for example). This afternoon features, among others, a stimulating conversation between the food writers Matthew Fort and Felicity Cloake that will have done enormous business for the surrounding food stalls, and a recording of Gabriel Ebulue’s Three Track Podcast with Vermont singer-songwriter Anais Mitchell, who shares personal stories about Gillian Welch, Rickie Lee Jones and Randy Newman, before heading over to the Mountain Stage to charm the crowd with her own lyrical Americana. 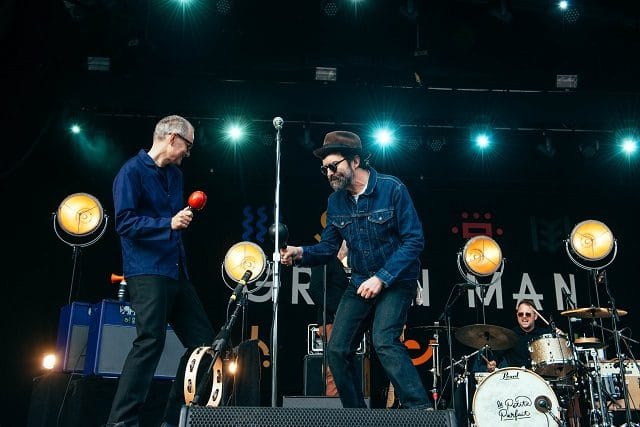 One act that seize the moment on Sunday are Eels, whose legendarily obtuse and enigmatic frontman Mark Oliver Everett is in fine fettle. “Who’s ready for some soft rock!!” is his introductory icebreaker, before launching into a version of The Who’s Out in the Street, swiftly consolidated by another cover, this time Prince’s Raspberry Beret. He rouses a previously lethargic crowd into life, his between-song patter at least a match in entertainment value to the band’s playing. The hits eventually come, with Novocaine For The Soul and Mr. E’s Beautiful Blues earning huge singalongs.

The best set of the weekend comes from Ezra Collective. The London-based jazz ensemble preface their show by explaining that Wales played host to their first show outside their hometown, before launching into a momentous tirade for the people to stand up and fight for the solutions they want from the world. Their musical set is as pure as their mindset, a tight, finely honed distillation of musics old and new, channelled through their passion for change. A snatch of Sweet Like Chocolate creeps into one song, in a possible nod to Stormzy’s celebrated Glastonbury headline set earlier this summer; certainly, the spirit of grime is an important ingredient for Ezra Collective, as much as afrobeat, funk, blues and countless others. An interpolation of Sun Ra’s Space Is The Place sees trumpet, sax and drums chase each other to the mountain top, each using their momentum to fuel the others. It is thrilling, thrilling stuff, and to see the intoxicated joy on the faces of the crowd – so many of them young – drinking it up, excited and learning, is the most hopeful sight. 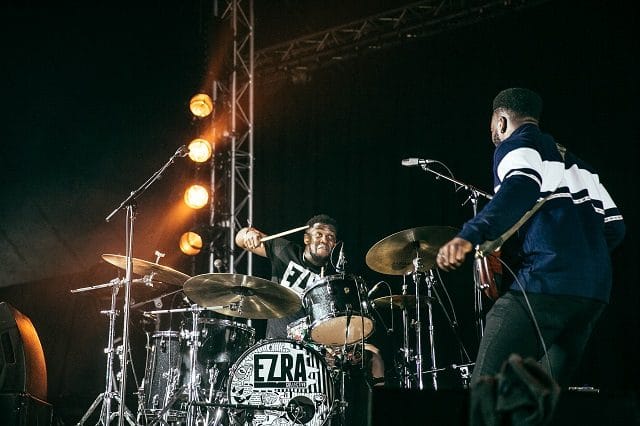 Rounding out the weekend in Far Out are the number one success story of the last few years in British guitar music, Idles. The Bristol band, currently amongst the favourites to win the Mercury Prize for their second album Joy As An Act Of Resistance, were unknowns just three years ago. Tonight, they have the tent fuller than anyone all weekend, the only chance of getting enough space to unglue your elbows from your sides being to walk into the centre of one of the night’s many moshpits, something you do at your peril. “God bless the European Union,” declares Joe Talbot as they walk on stage, unambiguously. The second album dominates the set, the crowd throwing every lyric back at the band as if it were a bottle of boiling piss. Frenzy levels reach their peak with Mother and Danny Nedelko, frantic, furious and yet always vulnerable. As Stewart Lee put it, they are the first and only ‘snowflake oi’ band. Somebody will write a book one day about pop culture’s reaction to this period of Western history. Idles deserve their own chapter. 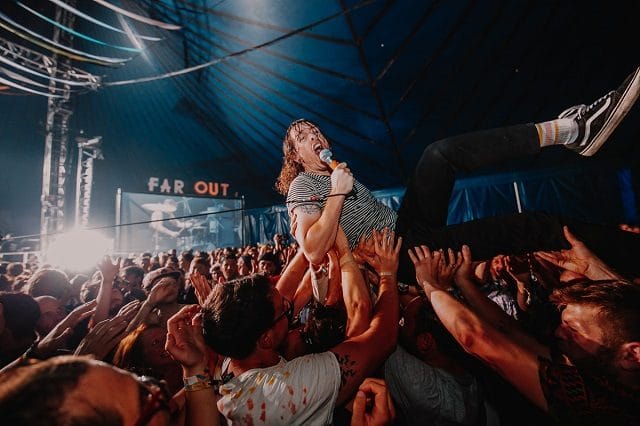